The Bard Behind the Bar: Lessons in Self-Publishing Salesmanship

Every writer should have a favorite bartender: a big guy with a calm, sympathetic manner; an appraising but friendly eye; a way with an anecdote; and a bushy mustache—in other words, a guy like Geoffrey Bartholomew. 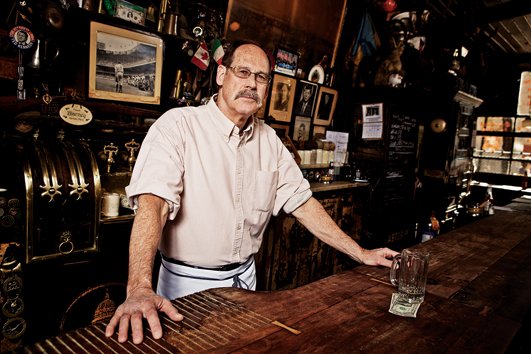 Geoff is, in fact, a bartender. But he isn’t just any bartender. He’s the head bartender at McSorley’s Old Ale House, New York City’s oldest pub and probably the most famous literary saloon in the country. Founded in 1854 by John McSorley, late of County Tyrone, the bar has been serving its eponymous brew without a break ever since—and that includes the dark years known as the Prohibition era. The list of its famous customers is long and varied, stretching from Abraham Lincoln (whose great antislavery speech in February 1860 was delivered at Cooper Union, just down the street) to Woody Guthrie, from e. e. cummings to John Lennon. The everyday clientele has ranged from the gnarled old workingmen of yesterday to the tourists and college students who jam the place these noisy nights. Nowadays the crowd also includes women, who were barred from the premises until a Supreme Court decision opened the doors to them in 1970.

Geoff isn’t only the kind of guy writers feel comfortable telling their troubles to across the bar. He is also an accomplished writer, and the author of a book whose success should cheer the hearts of any self-publishers who wonder what they’re going to do with those boxes of books sitting in the hallway.

As many writers discover these days, technology has made printing a book easier and faster than ever. But getting those boxes out of the apartment, selling those books, takes as much ingenuity and hard work as it ever did, maybe more. Bookstores, alas, keep disappearing. Direct mail is expensive, and e-blasts from strangers go into the spam folder. Selling door to door is obsolete, and hawking your book on street corners is tiring—besides, you can get rained on. So, what to do? One obvious answer: Sell your book anywhere you can, no matter how unconventional the arrangement.

That’s what Geoff did, and as a result he has sold thousands of copies and is revving up for more.

Let’s start at the beginning. Geoff was born sixty-six years ago in Cleveland. He won a basketball scholarship to Wooster College in Ohio, where he majored in sociology and began getting interested in putting words on paper. Then, like many another apprentice writer, he took any job he could get. He went to work in a steel mill. His next move brought him to New York City, where he enrolled in the master’s program at the New School. But that only lasted one semester, as the pressure of full-time work and full-time school proved overwhelming.

“I was taking twelve credits, the full load,” he says. “At the same time I had a job as a caseworker for what was then called the New York City Welfare Department, working with newly arrived Cuban refugees. I’d get home at eleven at night and have to start reading and writing. Something had to give.” So Geoff left graduate school and joined the Peace Corps, assigned to Paraguay. Later he spent a year in Italy, writing until the money ran out.

When he returned to New York, in 1970, he rented an apartment in a ramshackle old building on East Seventh Street in Manhattan. The ground-floor tenant: McSorley’s. What could be more convenient? He quickly became a customer and, in 1972, went to work there as a waiter and bartender. Meanwhile he tried to write, and that same year (apparently having learned how to juggle careers) he entered the master’s program at City College in New York.

The emphasis in the program was on fiction, and no wonder: The faculty included such luminaries as Anthony Burgess and Kurt Vonnegut. Geoff studied with both of them—and drank some ale with them too. Under their guidance he completed a novel, but he was never able to get it published.

In 1980 he was made head bartender at McSorley’s, a post he still holds (though he has since moved out of the upstairs apartment). McSorley’s has not lacked for chroniclers, the most famous being the New Yorker’s Joseph Mitchell, author of McSorley’s Wonderful Saloon (Duell, Sloan and Pearce, 1943). But no outside writer, not even Mitchell, had the intimate, day-to-day knowledge of the bar, its owners, and its customers that Geoff has. He began writing some of it down, in prose. He sent the work to agents and publishers, and they sent it right back.

After a suitable period of recovery, Geoff returned to an earlier love: poetry. And this time something clicked. He began writing poems based on the rich history of the bar and its colorful cast of characters. To give himself abundant poetic leeway, he departed from just the straight facts. Instead, he combined history and imagination, changing details as needed and bringing his accounts to life by writing them in first person. Before long he had a manuscript of 112 pages and was ready to return to the submission process. Once again he sent the work to publishers, and once again they showed no interest. This time he decided enough was enough—he would publish the book himself. And he had a plan for how to reach his audience.

“By this point, I had shown the manuscript to about twenty publishers, large and small,” Geoff says. “Some were quite complimentary about what I’d written, but none of the houses felt they could sell the book. It’s that old self-fulfilling prophecy: Poetry doesn’t sell, so let’s not even try. I was not amazed and I was not emotionally devastated. My years of experience had stopped me from getting too wildly optimistic about finding a publisher, but I had some ideas of my own. It would be nice if you had a publisher paying the bills, but one great thing about self-publishing is that you wind up with exactly the book you want.”

Geoff knew the importance of producing a quality volume, so he asked Elan and Jonathan Bogarin, young designers who were friends of his son, Rafe, to create a warm, appealing cover showing some of the many ancient photos and front pages that line the walls of McSorley’s. He also worked closely with Marie Carter, prepress manager of the Print Center, a nonprofit facility near his home in Greenwich Village, who did the prepress text work and saw the book through production. Soon enough, he had two thousand copies of The McSorley Poems in hand.

“Right from the start,” Geoff notes, “the Maher family, the current owners of McSorley’s, were very encouraging and supportive. And my coworkers, who had been following my progress for quite a while, were very happy for me. They really talked up the book.”

At McSorley’s, customers are constantly asking questions about the history of the bar, so what better way to satisfy their curiosity than a book of poems about the place? Geoff set up a small display of books on a corner of the bar. A prominently marked bar copy circulates around the pub (but if a customer lingers too long over the freebie, waiters tend to whisk it away).

Before long, it was time for a second printing. Then a third. And a fourth. To date, Geoff has over five thousand copies of The McSorley Poems in print. With the exception of several hundred sold by a distributor (who later stopped carrying the book), almost all the sales have been at the bar. An occasional order comes in through Geoff’s website, themcsorleypoems.net, but his schedule doesn’t allow for readings.

“There’s something magic about the personal connection when someone buys a book directly from the author,” Geoff says. “After all, most people don’t know anyone who’s written a book, so they get excited. Some people are incredulous that a bartender could write a book—but there’s my picture on the cover. Readers get a chance to talk about the book, to ask questions. They’ll come back to tell me which poems are their favorites and that’s often surprising, a learning experience for me. They’ll also come back to buy more copies.”

While The McSorley Poems continues to sell well, Geoff will soon make room on the bar display for a new self-published collection titled Light or Dark, which will be available this winter. It will have more long poems, such as a twelve-pager that imagines a conversation between McSorley’s customers Herman Melville and P. T. Barnum.

In addition to his new book, Geoff has another point of pride. Son Rafe’s well-received book, Pacific Rims: Beermen Ballin’ in Flip-Flops and the Philippines’ Unlikely Love Affair With Basketball, has just come out in paperback from New American Library. It remains to be seen whether Rafe is going to emulate the old man and sell his book on the court between layups, but it might be worth thinking about.

Robert Hershon is the author of twelve books of poetry and coeditor of Hanging Loose Press. For thirty-five years he was the executive director of the Print Center in New York City.

Join contributor Robert Hershon for a pint at McSorley's Old Ale House, where poet and head bartender Geoffrey Bartholomew has sold more than five thousand copies of his self-published collection, The McSorley's Poems, without the aid of a...
X