This week’s installment of Ten Questions features Melanie Hobson, whose debut novel, Summer Cannibals, is out today from Black Cat, an imprint of Grove Atlantic. The book recounts the fraught homecoming of three adult sisters—Georgina, Jax, and Pippa—to the Blackford family home on the shores of Lake Ontario, a house plagued by secrets, desire, and vengeance. Bob Shacochis praises Hobson’s writing as being filled with “the dark energy and twisted exuberance reminiscent of some of her most celebrated predecessors—Atwood, Murdoch, Oates, and so many others plumbing the raw, violent depths of toxic families.” Hobson holds degree in classical studies from McMaster University and was a Michener Fellow in the MFA program at the University of Miami as well as a Kingsbury Fellow in the PhD Program at Florida State University. She was born in New Zealand and immigrated to Canada, with her parents and sisters, as a child. After a few summers working on archaeological excavations in Greece, she moved to the United States and now lives in Florida with her husband and two children. 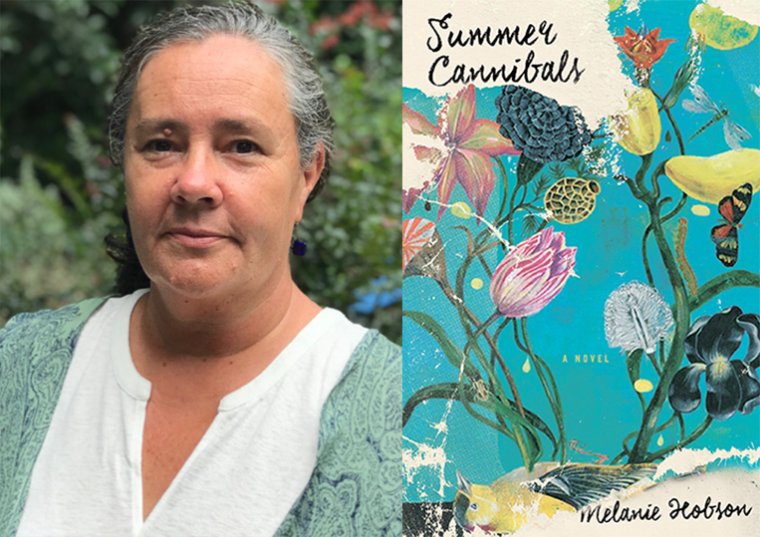 1. Where, when, and how often do you write?
As a guest room addition that was cheaper than an actual addition, my husband and I bought a 1954 aluminum Spartan trailer and parked it in our back yard. It’s so beautiful to look at, and so quiet, and so separate from the house, it quickly became my office. Before that I was in a junk room with a glass door, and a pair of noise-cancelling headphones. I work in the trailer’s front room, with all the curved windows and their view of the garden. There’s a computer and printer, but I write everything longhand so it’s really just a big space with a table, pens, and paper. It’s hot in the summer and cold in the winter, and there’s something about that slight discomfort that keeps me focused. I follow my children’s school schedule—they go to school, and I go out the back door to my trailer to work. It’s a good, solid work day when school’s in session. Sometimes work bleeds into the evening, or the weekend, or school holidays—but I really try to avoid that. It’s important for me to have time away from my desk, engaged in real life.

2. How long did it take you to write Summer Cannibals?
The actual writing probably took four years. The entire process—because there are long stretches of time when you’re waiting to hear from readers or editors, or because life in one way or another intervenes—took closer to seven. I know some writers try to have several projects going at the same time, but that doesn’t seem to work for me. I can multitask the hell out of a holiday meal preparation, but when I’m working on a novel it’s all or nothing. So I fill the ‘nothing’ with reading, maybe some tangential research, or catching up in other areas of my life that have been pushed to the side. I’ve been known to completely redesign and replant my garden, or paint a room or two.

3. What was the most surprising thing about the publication process?
What surprised me—and in the best possible way—was the collaborative nature of it. My editors—Katie Raissian at Grove Atlantic and Nicole Winstanley at Penguin Canada—were living embodiments of every golden story you’ve ever heard about intelligent, thorough, down-and-dirty editors of a bygone era. No! It’s not gone by! These people exist, and they climb right into the story with you and with precision and care and thoughtfulness they make it so much better.  It was an absolute gift to be able to work with them and learn from them. And I think that’s an aspect of the larger vibe in publishing—at least where authors intersect with it—that it’s fundamentally about relationships between people. I know I wasn’t sitting in marketing meetings or budget discussions—and I know, intellectually, that there’s a baseline business side to publishing—but I expected that to impact me in some way, and it didn’t. I truly felt, the entire time, that these were people who cared about this thing I’d created. Good people trying to do the right thing.

4. Would you recommend writers pursue an MFA?
Yes. Without any hesitation at all. Because it’s a place where your work will be taken seriously,  where writing—the struggle of writing, because it is a struggle—is understood and prioritized.  Your day is structured around it—your year is structured around it. Where else will you be given that freedom or license? An MFA also gives you a community of writers, and the importance of that cannot be over-emphasized. Your work might not be understood by the majority of teachers, or fellow students, but there will always be at least one—and that’s all you need—who’ll get you, who’ll help your work improve, who’ll read and edit and support you. And the other side of that, of course, is that you can be that one reader for someone else, and there’s a tremendous value to that as well. Those relationships will extend past the duration of the MFA. With Summer Cannibals there were a few points at which I needed an outside reader to help me identify what wasn’t working—and I sent it to those writing friends I’d made in the MFA, just as they’d sent me their work at various times.

And, of course, here’s the keystone to my argument: It was a former creative writing professor who passed the manuscript of Summer Cannibals to Elisabeth Schmitz at Grove Atlantic—and she bought it. An MFA can give you access, and it can give you knowledge—of how to revise and improve, certainly, but also how publishing works.

5. What are you reading right now?
I’ve just read, in quick, delightful, orgiastic succession, Gabriel Tallent’s My Absolute Darling, Gail Honeyman’s Eleanor Oliphant Is Completely Fine, Megan Hunter’s The End We Start From, Michael Ondaatje’s Warlight, and Tim Winton’s The Shepherd’s Hut. Yesterday I started Tim Winton’s story collection The Turning, and I’ve been dipping in and out of Thoreau’s Walden: Or, Life in the Woods, for the novel I’m working on now. I’m a binge reader. At certain points when I’m working on a novel I can’t read any fiction at all. So I may go months and months and months without reading fiction and then I will read five books in a week. I’m starting to get that feeling now, that The Turning may be my last book for a little while, because my own work’s starting to demand more of me. There’s something about another writer’s voice that can really muddy my own attempts to stay within my own.

6. Who is the most underrated author, in your opinion?
I don’t feel qualified to answer most underrated, but I’ll certainly take a stab at underrated. The Canadian writer Gil Adamson wrote a beautiful book, The Outlander, and I wish more readers in the U.S. were familiar with it. Adamson published poetry before she published this novel, and every sentence of this book is gorgeous, as you might expect...but it’s more than that. The pacing is terrific, the psychological nuance Adamson writes into her main character is brilliant, and there is an immensely satisfying reach to this book. It seems to contain the entire wilderness where the novel is set. You finish with a much greater understanding of this world and what it can do to you, which is, I believe, why we read.

7. Where did you first get published?
A feminist quarterly called Fireweed. I don’t recall the title of the short story, but I do remember I wrote it during an odd magical realist phase of mine. I think I’ve probably only ever written five or six complete short stories. Another was published in the Brooklyn Review. Since then it’s really just been novel writing, and I was never savvy enough to try to repackage chapters as stories and send them out for publication. I was also just totally focused on the craft of putting sentences together, of trying to figure out the complex machinery of a novel, and I didn’t want to stop what I was doing to try to publish something different. And I didn’t feel ready to publish. Didn’t feel that my work was ready.

8. What is the biggest impediment to your writing life?
My biggest obstacle is that I work for myself, and I work at home. A steady work week can be flexed out of existence by a plumbing issue, a vet appointment, or any number of necessary but time-consuming errands and chores. I have to be very selfish about my time and, whenever possible, push non-writing things to the end of the day. My husband teaches at a university, so he has a certain amount of flexibility in his work—but not to the extent that I do, so urgent fixes often fall to me (as I write this, there’s a message on my phone to pick our daughter up from school because she’s sick). On the other hand, the ‘impediment’ of working at home and for myself has allowed me to spend more time with my children, and enabled them to have a more free-wheeling childhood. My daughter will be in her own bed in half an hour, rather than the school nurse’s cot, so—on balance—I’ll take that impediment any day of the week.

9. What trait do you most value in your editor?
As I mentioned earlier, I’ve been extremely fortunate with Summer Cannibals, to have been able to work with Katie Raissian and Nicole Winstanley. I would characterize them both as incredibly generous. Generous with their time, with their detailed edits, and with a quality of what I would call expansiveness. They can line edit, certainly—and they do—but what I value most about their approach is that they both see the entire thing. They see what the book is striving to be—in its totality—and they can then, very precisely, pick out where it’s failing at that and suggest alternatives…and in the most thoughtful and kind way. And that kindness shouldn’t be underestimated, because it matters. The book, the characters, the story—they are all, in a strange way, fully human, deserving of respect and compassion and sensitivity.

10. What’s the best piece of writing advice you’ve ever heard?
A long time ago, I audited a fiction workshop at the University of Texas in Austin, taught by the novelist Zulfikar Ghose. I was trying to decide if this writing thing was for me. He said something I’ll never forget—that he wasn’t the best writer among the group of writers he hung out with in London, but that he was one of the only ones who stuck with it. The others dropped off to get jobs, pay mortgages...but he just kept going. This same piece of advice has been conveyed to me, again and again, in various ways, and it all boils down to one simple word: work. Just. Keep. Working.