This week’s installment of Ten Questions features J. M. Holmes, whose debut story collection, How Are You Going to Save Yourself, is out today from Little, Brown. This linked collection follows a decade in the lives of Dub, Rolls, Rye, and Gio, four young friends coming of age in Pawtucket, Rhode Island, grappling with the complexities of family history and class; the discovery of sex, drugs, and desire; and the struggle to liberate themselves from the legacies left to them as Black men in America. Holmes is, as Rebecca Makkai puts it, “not just a new voice but a new force: honest, urgent, compelling, often hilarious, and more often gut-wrenching.” Born in Denver and raised in Rhode Island, Holmes is a graduate of the Iowa Writers’ Workshop, and his stories have appeared in the Paris Review, the White Review, and H.O.W. He lives in Milwaukee, Wisconsin, and is currently at work on a novel. 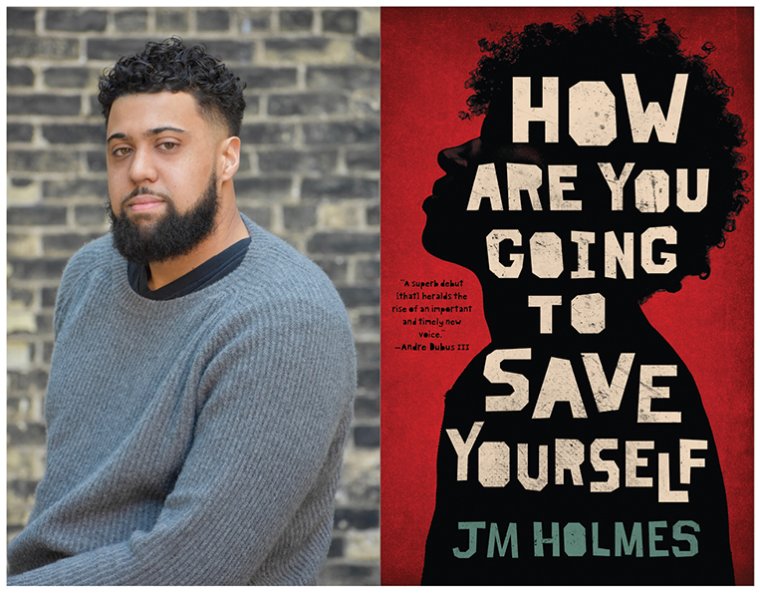 J. M. Holmes, author of How Are You Going to Save Yourself.

1. Where, when, and how often do you write?
Starting with a simple question and I can’t even answer this one. I used to write at night a lot, very late when everything is quiet. I’m not much of a morning person. Lately, I’ve been writing on my phone at work when it’s slow and we don’t have any tickets in the kitchen—sacrilege, I know.

2. How long did it take you to write How Are You Going to Save Yourself?
Some of the stories are revamped versions of pieces I wrote as an undergrad, so I guess seven years. It pains me to say that since it makes those 250 pages seem really small. The bulk of the collection was written between 2015 and 2016, though.

3. What has been the most surprising thing about the publication process?
How little control I have over it. It is a terrifying process to release your literary babies into the world, where anybody can say anything they want about them. Also, just how long it takes from sale to shelf—slowest seventeen months of my life.

4. Where did you first get published?
I got published in some student publications as an undergrad, but the first time I got paid for anything literary was the Paris Review. (Shameless shout out to Anna, my agent. She’s dope.)

5. What are you reading right now?
Currently, I’m reading Tao: The Watercourse Way by Alan Watts and Ohio by Stephen Markley. They are very different books. The former is probably in conjunction with my answer to the publication process question. Trying to fill the Zen reserves (even though it definitely doesn’t work like that) before this process really takes off.

6. If you were stuck on a desert island, which book would you want with you?
You mean if I couldn’t have any albums? Cause music would be the first piece of art I took with me—probably [Kendrick Lamar’s] Section.80 or Channel Orange. And am I stranded for an indefinite amount of time? Cause if not I’d probably pick something long enough to keep me occupied until I’m rescued. Enough deflecting; tough question. Maybe The Brothers Karamazov. I feel like that book would satisfy my philosophy itch and still give me a plot to escape through. I’ve only read it in its entirety once, but the excerpts I’ve read here and there since then keep revealing new things to me.

7. Who is the most underrated author in your opinion?
Claude McKay or Breece D’J Pancake. The latter cause he took his own life so young and has a small body of work. The former, I don’t really know, maybe because he was writing at a time when there were a lot of literary sharks in the water—Zora Neale Hurston, James Baldwin, Richard Wright. But either way, they both deserve to be on ELA curriculums in the United States.

8. What is the biggest impediment to your writing life?
Paying rent.

9. What trait do you most value in your editor?
Attention to detail. I know it sounds like an obvious one, but Ben George is a meticulous dude when it comes to the written word. We’ve had debates over single words. He was also instrumental in helping me hammer out all the age and time continuities in the book.

10. What is the best piece of writing advice you’ve ever heard?
Almost everything Amity Gaige has ever told me probably ranks up there. When I was graduating from college she told me to go get a job and live a little. She said, “Learn how to write and have a job and if you’re still writing and yearning to write, you’ll be fine. You’ll be a writer.” Either that or, “Don’t write drunk too often, you’ll lose the sound of your own voice.” Her husband might’ve said that one, actually. Either way, they both come from her section and they’re both true.