This week’s installment of Ten Questions features Brian Kimberling, whose second novel, Goulash, is out today from Pantheon. A book that Tessa Hadley calls “a quirky, funny, melancholy portrait of a significant European moment,” is the story of Elliot Black, who escapes small-town Indiana by moving to Prague in the late 1990s, just as the Czech Republic is moving out of the shadow of communism, and Amanda, an English teacher from the United Kingdom with whom he falls in love. The couple explore the dark history and surprising wonders of their adopted city, eventually learning that the forces reshaping Prague are also at work on them. Brian Kimberling grew up in southern Indiana and spent several years working in the Czech Republic, Mexico, and Turkey before settling in England. He received an MA in creative writing at Bath Spa University in 2010. Snapper, his first novel, was published by Pantheon in 2013. 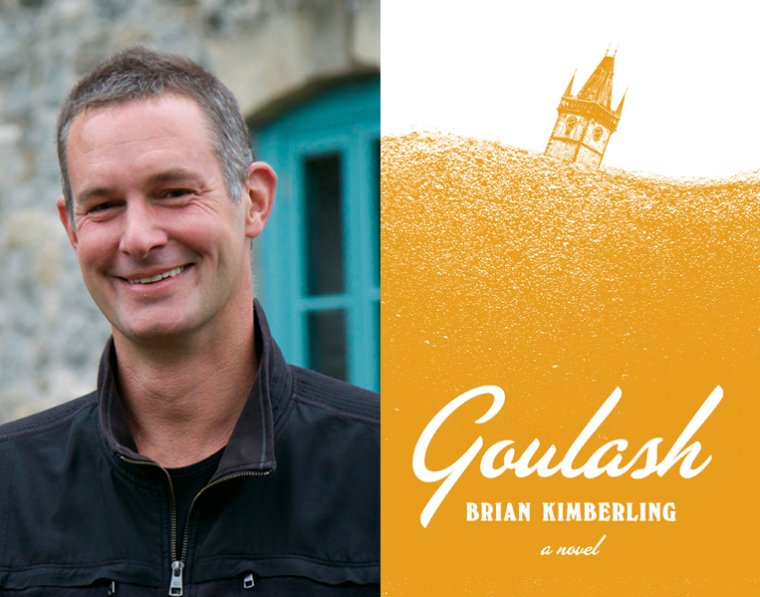 1. How long did it take you to write Goulash?
Goulash took me three and a half years. I swore up and down three years ago that there was no such thing as a “second novel” curse, that I didn’t feel under pressure, that everything was going to be alright. (My first novel, Snapper, was published in 2013). Yet many people take eight or ten novels to complete a second book if they complete it at all, and now I can see why.

2. What was the most challenging thing about writing the book?
Goulash is set in Prague, and although I lived there for four years, it is not my place or my culture or my people, and I didn’t want to be a brash, clumsy American stepping on all the pretty local wildflowers or the dead bodies underneath them. Goulash is being translated into Czech, which I hope is a sign that I got something right.

3. Where, when, and how often do you write?
In the kitchen, late morning or early afternoon, and sporadically. I write everything by hand, so later I have the dreary job of typing it all up and discovering that my word count is about half what I estimated.

4. What was the most unexpected thing about the publication process?
That it happened at all—twice now.

5. What are you reading right now?
Late in the Day by Tessa Hadley.

6. Which author, in your opinion, deserves wider recognition?
All of them! But to a select few we will also grant cash aplenty: Tessa Hadley, Lauren Z. Collins, the fearless Samantha Harvey.

8. What is the biggest impediment to your writing life?
My other life: the one comprising fatigue, childcare, rent, etc.

9. What trait do you most value in an editor (or agent)?
Is this a trick question? It’s like asking me to choose between children. I have one editor in the U.S. and one in the UK as well as an agent in the UK. All three of them have, I think, taken risks on my behalf. I can go months without hearing from any of them, but I never doubt their commitment.

“Go there. When the work takes you somewhere deep, it can be difficult not to swim back up out of fear or squeamishness.” —Lindsay Stern, author of The Study of Animal Languages

“I’m always trying to do something new, which is usually something I’m afraid of.” —Shane McCrae, author of The Gilded Auction Block

“I do not allow rules and regulations to dictate my writing—it’s one thing I can control.” —Paige Ackerson-Kiely, author of the poetry collection Dolefully, a Rampart Stands