by
Jen A. Miller
News and Trends
March/April 2007

When Darrel Blaine Ford was nine years old, he hopped on his bike and rode through his hometown of Amityville, on Long Island, New York. About ten miles outside of town, in West Hills, his young legs finally grew tired and he stopped. "I saw an old farmhouse, so I got off my bike and sat down under a big tree," he says. "That's when I saw a plaque that said, The Birthplace of Walt Whitman." The custodian of the house, which had been built in the early nineteenth century and designated a historic site in 1957, saw Ford under the tree and invited him inside. She gave him a glass of milk, a peanut butter sandwich, and a copy of Leaves of Grass. 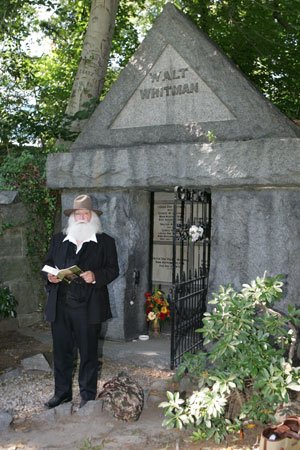 That bike ride more than sixty-five years ago was the beginning of Ford's lifelong interest in Walt Whitman—an interest that led him to study the writer's poetry, teach it to children, and even become a Whitman impersonator. For the last twenty years Ford has visited schools and libraries as the famous poet in order to interest students in Whitman's work. "I'm not a very mystical person, but I just somehow knew I was going to do this thing with Whitman," Ford says.

In 1930 Ford was born on Long Island, where Whitman had been born more than a hundred years before. Also like Whitman, Ford has long white hair and a snowy beard, and stands over six feet tall. Stepping into the poet's shoes has been easy, says Ford, as he believes the two have a lot in common. "I'm a happy guy, and I think Whitman was too," he says. "There are people who stress his loneliness, and that was certainly a component of his life, but I think he was a glass-half-full rather than a glass-half-empty sort of guy. I wish I were as creative as he was, but I think I have the capacity to appreciate creativity, and I know he did too."

After serving in the Air Force during World War II, Ford worked in finance while also traveling the world on ornithological grants to watch birds in the Arctic and Central and South America. In 1976 Ford became a teacher and taught science and history to every grade, from kindergarten through college, in Long Island. He also directed a youth organization that brought underprivileged children to universities, museums, and battlefields along the East Coast.

Even though he doesn't teach in the classroom setting anymore, Ford believes he's still educating people, especially children, by portraying Whitman. "In this age children are weaned on television, and they need drama in teaching. They expect it; if it's not there, they're bored," he says. "Having a real man who looks like the pictures they've been shown helps them at least get a small handle on who Whitman was."

Ford started impersonating Whitman in 1987, when he offered to visit schools and libraries in Long Island dressed as the "Good Gray Poet"—complete with a carpetbag and a cane with his face carved on it. "I had no great desire to be more than what I am, and that is just somebody who is available when you need a Whitman," Ford says. But word of Ford's impersonation spread, and soon he was a regular visitor in classrooms and libraries. Currently he's the highlight of Whitman and His Invincible City, a three-hour guided bus tour in Camden, New Jersey—where Whitman died after a series of strokes, on March 26, 1892, at the age of seventy-three. The tour debuted last fall and starts again in April, National Poetry Month.

After a bus trip that traces Whitman's footsteps through Camden, the tour arrives at Harleigh Cemetery, where Whitman is buried in a massive tomb. In his will, Whitman stated that he wanted a door to the tomb left ajar, and it is through this door that Ford walks to begin, in dramatic fashion, his talk to the tour group.

"I issue forth," he says with a laugh. He talks to the visitors about Whitman, reads the poet's work, and answers questions—all the while impersonating Whitman. "Some people really seem to have a spiritual experience. There's an enormous desire on the part of people to have something tangible, so I guess I'm a tangible Whitman."

Even though Ford's physical similarities with Whitman make that poet the obvious candidate for impersonation, Ford insists it has more to do with Whitman's poetry itself. "I want people to read Whitman. I think it will filter into every fiber of their blood," he says. "He certainly was a complete departure from what was considered poetry before that. I don't think there's any poet since him who hasn't been influenced by him."

Ford's favorite book by Whitman is, not surprisingly, Leaves of Grass (the original 1855 edition), which includes "Song of Myself," Ford's favorite poem. A volume of only twelve poems, Leaves of Grass was subsequently revised
by Whitman nine times, which
Ford says was one of the poet's mistakes. "In some cases his titles got better, but his poems were sometimes weakened by his constant fiddling with them."

Whitman was a tireless poet and self-promoter—just a year before he died he began the so-called "deathbed" edition of Leaves of Grass, writing, "I am determined to have the world know what I was pleased to do." Ford, who is now seventy-seven, shares some of the poet's energy. In addition to working for a manufacturing distributor on Long Island, and, of course, issuing forth from Whitman's tomb, Ford also volunteers as Santa during the holiday season.

The Written Image: Walt Whitman
by Staff | News and Trends 3.1.05

To celebrate the 150th anniversary of the publication of Leaves of Grass, the Washington Friends of Walt Whitman is cosponsoring a citywide festival from March 26 (the day of Whitman’s death) to May 31 (his birthday).