This April, during National Poetry Month, and through September, five high school students from across the United States will have their work cut out for them. Sojourner Ahebee, Michaela Coplen, Nathan Cummings, Aline Dolinh, and Louis Lafair, the 2013 National Student Poets, will serve as ambassadors to their respective regions of the country for one year. After being officially appointed by First Lady Michelle Obama in a ceremony at the Library of Congress last September, the young poets began traveling around the country to give readings, lead workshops, participate in panel discussions, sign copies of a chapbook of their work, and develop community service projects related to poetry. 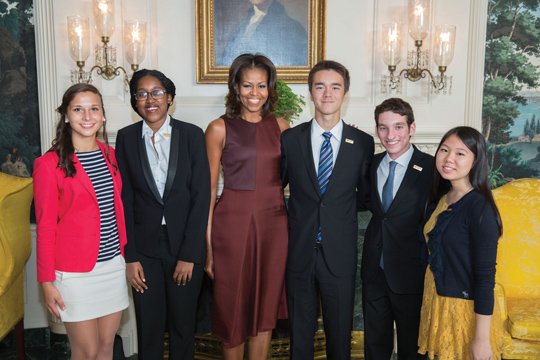 Now in its second year, the National Student Poets Program (NSPP)—a partnership among the President’s Committee on the Arts and the Humanities, the Institute of Museum and Library Services, and the Alliance for Young Artists & Writers (AYAW)—was initially conceived as a kind of youth poet laureate position. Today it honors five ambassadors selected from among the winning entries of ten thousand young poets who apply for a chance to win gold or silver medals in the national Scholastic Art & Writing Awards each year.

The poets aren’t typical teenagers. Their poems focus less on angst and broken hearts, and more on ideas, love of language, and the world at large. The ambassadors are selected by a jury of U.S. poets that this year included Richard Blanco, Kimiko Hahn, and Terrance Hayes, among others.

Hahn, who teaches in the MFA program at Queens College in New York City, explains that her standards are high, even for high school students. “I first look at texture in language, an awareness of sound. I also look for genuine feeling, as opposed to self-conscious tone. It can be difficult for young writers to distinguish between the two, because self-consciousness is so much a part of figuring out one’s identity.”

But genuine emotion is easy to come by in the National Student Poets’ work, perhaps because the poets happen to be interested in the world beyond their high schools, their hometowns, and their own circumstances. “I began writing poetry as a means of exploration,” says Cummings, a native of Mercer Island, Washington, and representative of the northwestern region. “It’s a way of breaking out of my daily routine and capturing moments and emotions that I wouldn’t otherwise experience.”

Midwestern representative Ahebee, of Interlochen, Michigan, spent her first seven years in Ivory Coast until civil war forced her and her mother to flee. She says that being uprooted at a young age has woven questions of home and diaspora throughout her work, but that she finds as much inspiration in other communities around the world as in her own experience of displacement. After visiting Paris last summer and witnessing ill treatment of Roma immigrants there, Ahebee began work on a series of poems depicting the experience of members of similar communities in the United States. She describes her work as “an attempt to give voice to their often voiceless narrative, to understand my own history as a girl with two homes.”

“It’s that type of stuff that keeps me going as a poet,” she says.

As the executive director of AYAW, which administers the Scholastic awards, Virginia McEnerney works closely with the winning poets and notes that the personal relationships the students have to poetry make the program a success. “These are teens who can speak to how they have personally experienced poetry, the good and the bad,” she says. “This can be very effective and relatable for younger, at times reluctant audiences.”

Perhaps even more important, McEnerney says, is how the program has helped parents and teachers better understand why and how poetry resonates with young people. The student poets are convincing advocates for their art, discussing poetry with sophistication and ease. Ahebee believes fiercely in poetry’s relevance: “When people say poetry is obsolete, I have a hard time believing them,” she says. “It’s time to open our eyes and look at all the unlearned territory poetry is beginning to make sense of.”

The five NSPP ambassadors will continue to read, teach, and engage young people all over the country throughout the year and have already been hard at work. In February Lafair, a native of Austin, Texas, and the southwestern regional poet, gave a reading at a conference for the Texas Council of Teachers of English Arts with 2012 state poet laureate Jan Seale; the same month Cummings read with Washington State’s current poet laureate Kathleen Flenniken at Mercer Island Library following a poetry workshop the pair cohosted. Dolinh of Vienna, Virginia, the southeastern regional poet, will be a featured reader at the upcoming Kentucky Writers’ Day in Frankfort. Coplen of Carlisle, Pennsylvania, who represents the northeastern region, will participate in a panel discussion in New Jersey, at Caldwell College’s annual literacy conference. Coplen will also be a featured reader at the Academy of American Poets’ Poetry & the Creative Mind Gala at Lincoln Center on April 24. Ahebee plans to visit public schools and libraries in Cleveland and distribute poems to local residents on the street.

“I get a whole year to get the country excited about poetry,” Ahebee says. “What’s more beautiful than that?”

Amanda Calderon is a poet in Brooklyn, New York. Her work has been published or is forthcoming in Poetry and the Kenyon Review.