While their names don't have the weight of, say, Stefan von Holtzbrinck (the CEO and younger son of the late founder of Holtzbrinck Group, which owns Farrar, Straus and Giroux, Henry Holt, and so on) or Hartmut Ostrowski (the head of Bertelsmann AG, which owns Random House) or even Rupert Murdoch (whose News Corporation merged Harper & Row and William Collins and Sons, thus establishing HarperCollins Publishers), Steven Gillis and Dan Wickett are building quite the little conglomerate with Dzanc Books, having acquired two small presses and two literary magazines within the last twelve months. Created as a nonprofit in Westland, Michigan, in 2006, Dzanc burst out of the gates with Roy Kesey's novel Nothing in the World, which was released last August, followed shortly thereafter by his story collection, All Over. That same month, Dzanc announced that it had acquired OV Books, a relatively new offshoot of Other Voices, the all-fiction literary magazine founded in Chicago in 1984 and published by the nonprofit Other Voices, Inc., in collaboration with the University of Illinois Press. OV Books published only two titles—Tod Golberg's Simplify and Corrina Wycoff's O Street—before reaching an agreement with Dzanc whereby OV's executive director Gina Frangello and senior editor Stacy Bierlein will continue to acquire and edit at least one title per year, while Dzanc runs the production, printing, and distribution of the new, independently operated imprint. Other Voices, however, didn't make the transition. Much to the disappointment of loyal readers, its forty-seventh issue, dedicated to Chicago writers and published late last year, was its last. Then, less than four months after securing OV Books, in November Dzanc announced two new acquisitions: Black Lawrence Press, a small New York City-based press (founded in Watertown, New York) that publishes books of poetry, fiction, nonfiction, and translations, as well as the online journal Adirondack Review; and Monkeybicycle, a literary magazine edited by Steven Seighman in Netcong, New Jersey. "With Black Lawrence Press and Monkeybicycle joining OV Books in the Dzanc fold, we will now be involved with the publication of both online and print journals, and have our hand in poetry, nonfiction, and translated material, as well as the literary fiction we're already known for," publicist Lauren Snyder wrote in a press release. "Our publishing...will range from major hardcover releases on down to two-hundred-copy chapbooks." Pretty expansive stuff from a sector of the publishing industry where "organizational architecture" often refers to the dimensions of the living room where the CEO (certifiably exhausted owner) does the bulk of his or her work.

Lisa Pearson tends to talk about Siglio Press, the new independent publishing house in Los Angeles, using what she laughingly refers to as "the royal we." That's because, as publisher, Pearson is the sole Siglio staff member, having founded the press earlier this year to publish "uncommon books that live at the intersections and interstices of art and literature." The press's first title, published in April, is The Nancy Book, a collection of the late Joe Brainard's drawings, collages, and paintings appropriating the classic comic strip character Nancy. Along with original essays by Ann Lauterbach and Ron Padgett, author of Joe: A Memoir of Joe Brainard, published by Coffee House Press in 2004, The Nancy Book features more than fifty works, including Brainard's collaborations with poets Bill Berkson, Ted Berrigan, Robert Creeley, Frank Lima, Frank O'Hara, and James Schuyler, some of which have never been published or exhibited before. Forthcoming titles include Several Gravities: A Matter of Collage, a collection bringing together poet Keith Waldrop's collages and his essays on his visual art's relationship to his poetry, in spring 2009, as well as a novel composed of maps, a pseudoautobiographical assemblage of artifacts from the life of a poet, and other collaborations between artists and writers. 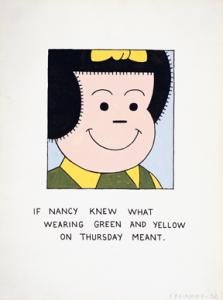 A selection of images from the first title published by Siglio Press in Los Angeles.
X