Much has been written, and probably even more has been said, about the author Tao Lin. Most of it's hung with garlands of approval and admiration, but some of it, perhaps as a direct result of the praise, is laced with invective. Lin—whose first poetry collection, you are a little bit happier than i am, was released by Action Books in 2006, and whose novel Eeeee Eee Eeee, story collection Bed, and second poetry collection, cognitive-behavioral therapy, were all published by the Brooklyn, New York-based indie Melville House Publishing in the past couple of years—is acutely aware of this fact. "I think most people just think I'm a gimmicky asshole," he told New York magazine's Sam Andrews earlier this year. Swing from thread to thread on his web of Web sites, and one can find plenty of what's typically considered gimmickry. His blog was once titled Reader of Depressing Books; now it's heheheheheheheeheheheehehe.com and on it he offers such self-promotional posts as "I want these blogs to blog about me," followed by nine URLs. Last year he sold 10 percent shares of his unfinished novel for two thousand dollars each. Some people love this kind of stuff; others, not so much. So when Lin established the small press Muumuu House last year, the typical reaction was "Great, more," which was either gleefully genuine or dripping with the sweet syrup of sarcasm, depending on the perspective. But really, the launch of a new independent press should always be a cause for celebration, whether one agrees with its governing aesthetic (in Lin's case: minimalist grace, deadpan humor, and absurd realism) and promotional tactics (pretty much anything goes) or not. After all, Muumuu House publishes poetry, fiction, and nonfiction—and who doesn't want more of that?—as well as particularly witty Twitter selections and Gmail chats online (okay, maybe everyone could use less of that). Its first two print books, both poetry collections, are Sometimes My Heart Pushes My Ribs by Ellen Kennedy, published in March; and Brandon Scott Gorrell's During My Nervous Breakdown I Want to Have a Biographer Present, published in June. If anyone thought that Lin, in his new role as book publisher, would quietly slip into the background—the humble captain of the ship—consider the following blog post, in which he announced the press's first two books. "I...feel confident that books published by Muumuu House will be ‘promoted' and kept in print for the rest of my life. I do not foresee myself publishing a book that I do not feel is like ‘a classic,' something to lay in bed with in times of severe depression for purposes of consolation. I am excited to publish the two books described above. I also feel like I will ‘do whatever it takes' to have the books be high quality in terms of paper and things. I feel like I would almost rather kill myself or hit myself a lot or something than ‘fail' and create situations and objects of disappointment for people (including myself, and those involved) in the world to encounter and think about and not feel excited about." All hands on deck, Tao, full steam ahead. 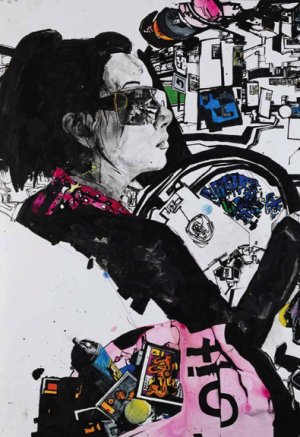