by
Jen A. Miller
News and Trends
September/October 2006

In the early 1980s, New York City–based Workman Publishing released the illustrated Shakespeare plays Macbeth and King Lear. This was before Art Spiegelman's MAUS won the Pulitzer Prize, and before serials like Harvey Pekar's American Splendor, Frank Miller's Sin City, and Alan Moore's V for Vendetta became the bases for feature films and helped graphic novels blossom into a $250 million industry. The illustrated versions of the plays fell out of print before graphic novels began to acquire a mainstream audience, but last month, Workman imprint Black Dog and Leventhal reissued King Lear and Macbeth in its Graphic Shakespeare series. 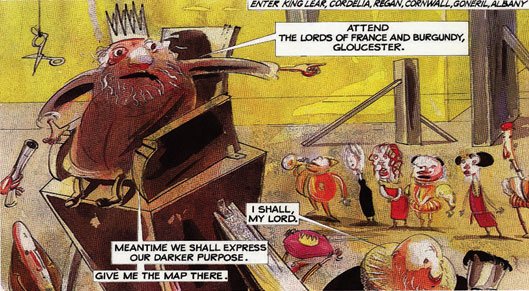 "These books had been done twenty years before their time," says Becky Koh, an editor at Black Dog and Leventhal. "Plays lend themselves to graphic novels so well because they are visual. So much of Shakespeare is not in the text. When you add the graphic element, it makes the whole thing come alive." Koh says she hopes that the books will appeal to graphic novel readers as well as traditional Shakespeare fans and students.

Each play is unabridged and includes the illustrations that appeared in the original edition. It's a creative combination that Ian Pollock, who illustrated King Lear, says was absorbing and "technically quite challenging, having to rearrange the text pictorially so that you kept the action moving throughout."

Pollock was approached to do the drawings for King Lear after a poster he created for a 1983 Royal Shakespeare production of the play caught the attention of editors at Workman. "I was privy to the rehearsals at the Royal Shakespeare Company, so I was familiar with the play," says Pollock, whose work has also appeared in Esquire, Playboy, Reader's Digest, and Rolling Stone. "But I didn't want to research it too much because I wanted to keep it my own."

Pollock worked on the book for a year while also illustrating for Rolling Stone. "My style was changing throughout the duration of the project," he says. In order to keep the style consistent throughout, he started in the middle of the play and worked backward to the first act, then returned to the middle and worked to the end, bringing King Lear to pictorial life in over a thousand images.

Now that the original editions are back in print, Black Dog and Leventhal plans on releasing another four illustrated Shakespeare plays. Though they haven't determined which those will be, the first play has been scheduled for a tentative release in spring 2007.

Graphic novels started to appear in the 1970s as versions of comic books, but whereas comic books are typically serialized, graphic novels are self-contained stories usually aimed at mature audiences. Serious acclaim for the genre first came in 1992, when Spiegelman won the Pulitzer Prize for the second volume of MAUS (Pantheon Books, 1991). Spiegelman's books, about his parents' survival of the Holocaust, garnered a lot of attention for the genre, but mainstream recognition—resulting in a profitable industry—arrived only recently.

In 2001, the graphic novel industry brought in $75 million. By 2005, that number had jumped to $250 million. Bookstores have expanded their graphic novel and comic-book sections to meet the growing demand. Perhaps the most striking example of the genre's broader acceptance is that this year's graduates of the U.S. Military Academy at West Point were required to read Persepolis (Pantheon Books, 2003), Marjane Satrapi's illustrated autobiography about grow-ing up during the Iranian Revolution.

As the genre's popularity grows, the form itself is expanding. For example, in August, Sid Jacobson and Ernie Colón's The 9/11 Report, a "graphic adaptation" of the report compiled by the National Commission on Terrorist Attacks Upon the United States, was published by the Farrar, Straus and Giroux imprint Hill and Wang, which in November will also release illustrated biographies of Malcolm X and Ronald Reagan. And Houghton Mifflin is adding an annual comics and graphic novel anthology to its Best American Series—a line of anthologies of short fiction, essays, and other genres. The Best American Comics 2006, edited by Anne Moore along with guest editor Harvey Pekar, will be published next month.

Jen A. Miller is a freelance writer in Collingswood, New Jersey.

Interesting timing, linked at all to the other recent graphic versions of Shakespeare? Another unabridged full-color version at www.classicalcomics.com (plus 2 other versions for differing skill levels) and manga B&W abridged books at www.selfmadehero.com. Oh, and of course the Wiley B&W abridged versions.... Useful in schools no doubt - depending on grade, etc.

The Permanent Prince
by Sarah Weinman | News and Trends 7.1.08

As the English-speaking world's most famous playwright, William Shakespeare wields a tremendous influence over popular culture, even four centuries after his death. Two new novels, published within a month of each other, bring Hamlet into...