This isn’t really my landscape,” says Sherwin Bitsui as we head east on Interstate 10 through the Sonoran Desert. We’ve just left Tucson, and almost immediately the surroundings open up. No more southwestern tourist traps or neighborhoods heavy with generations of conflict among Mexicans, Native Americans, and whites. Around us, the mesquite and the cholla, with bursts of white spikes, grow in abundance along the highway. Aside from the road itself, the only other man-made objects in sight are the shrines—descansos in Spanish—commemorating tragic highway accidents. 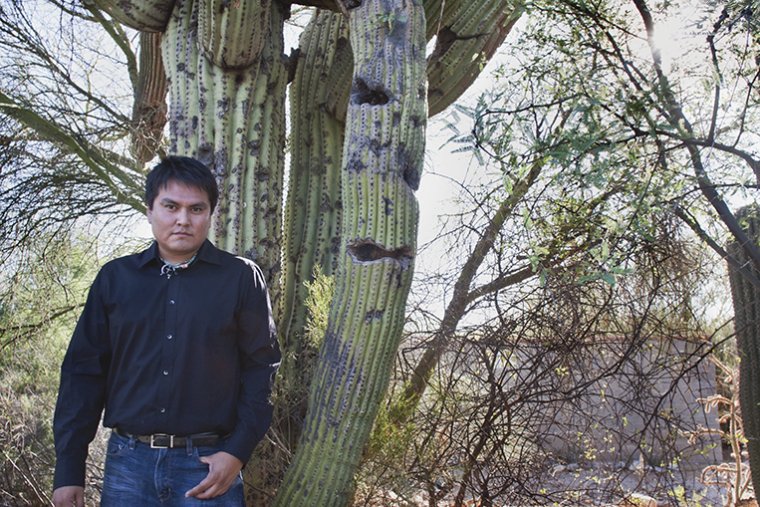 While it may not be his preferred landscape, Bitsui has learned to appreciate it. “Especially with this sky, and when it rains,” he says.

Indeed, the land has just been blessed with rain for the first time in five months—half an inch in a matter of hours, which is rare for southern Arizona, where the average rainfall is twelve inches a year. The heavy downpour caused more than a few traffic mishaps in the city. Sirens blared as the drains flooded at every intersection. But past the city limits everything is calm: Large clouds hover over the Catalina Mountains and the Tucsons, and the land releases the soothing smell of wet earth.

It’s Bitsui who suggested conducting our interview while driving in a car. “It’s how I remember hearing stories when I was a child,” he says. “Riding in my father’s truck.”

And soon, Bitsui, whose second book of poetry, Flood Song, will be released this month by Copper Canyon Press, should be sitting back and enjoying the proverbial ride. Up to now, he’s been laboring over last-minute revisions and worrying a bit about how his work will be received. But Michael Wiegers, Copper Canyon’s executive editor, speaks with excitement and confidence when he characterizes Bitsui’s new book: “There’s a distinct music to Flood Song, an almost mournful high-desert mysticism at work among all the wonder and uncertainty he’s addressing. It’s an intensely visual book that jumps back and forth between the urban and the rural, the modern and the traditional, the personal and the tribal; its vision is sprawling and marvelously ambitious—the poem is in constant motion through landscape and time and cultures.”

The landscape that is Bitsui’s preference lies five hours to the north of Tucson, in the Navajo reservation where his family has lived “since time immemorial,” he says, tongue-in-cheek. “It’s difficult to convince people that my upbringing is not like the traumatic ones shown in books and documentaries about Native peoples,” Bitsui says. He points out a turkey vulture descending gracefully from above, and then launches into a story about having seen a caracara, also known as a Mexican eagle (“It’s really a falcon.”), for the first time. What amused him about it was that he spotted the bird in a parking lot, a place far removed from the romantic notions of land and nature that are so often imposed on his work by readers because he’s Native American.

“I have no control over how people perceive me. One time a white woman came to my reading and just cried in front of me,” he says. “She was reacting to my indigenousness, not my poetry, which isn’t even about reservation life.” There have been many other awkward exchanges: Once he was shown a picture of Geronimo and asked if he was related (“No. Geronimo is Apache.”), another time he was given tobacco. “What did that person think I was going to do, trade with it?” he asks, incredulously.

Bitsui shrugs these things off. At thirty-four, he’s more concerned about larger issues, like the fate of the next generation of Native Americans. He has been teaching writing workshops lately with ArtsReach, a Tucson-based program designed to provide Native American youth with avenues for creative expression. “The stories they tell,” Bitsui says sadly, shaking his head. “All violence and poverty.” Indeed, suicide among young Native American people has risen at an alarming rate over the last few years.

“I guess I’ve been fortunate,” he says. “I’m not a displaced Indian, my family lives on our land, and even though problems exist on my reservation, I had a happy upbringing compared with the ones these kids are dealing with.”

As it starts to drizzle again, the raindrops splattering on the windshield trigger his memories of monsoon season on the reservation. In the fall, the monsoons, with their heavy downpours and spectacular lightning shows, rejuvenate the landscape. “For some reason I also have this impression that up there the sun feels closer,” he says. “It must be the joy of being home, where the houses all face east and the taste of mutton always reminds me of the flavors of the land.” He ponders his words for a moment and then adds, “I suppose even I crave myth.”