The Rising Fortunes of the Chinese Expat Scene

I ask Kesey if there is much exchange between members of the Beijing expat literary scene and Chinese writers. “I think it’s divided, but the literary oasis where both sides meet is here,” he says with a nod around us at the Bookworm. Kesey advises me to meet with a translator friend of his, and a week later, I have tea with Abrahamsen, one of three Mandarin-to-English translators who run Paper-Republic.org, a Web site featuring Chinese fiction writers in translation. According to Abrahamsen, there is increasing overlap between the Chinese and Western creative writing communities. Many Chinese writers, put off by censorship and the Byzantine Chinese publishing system that pays no royalties to authors, are hoping to publish directly with a Western press, skipping Chinese publication entirely, he says. 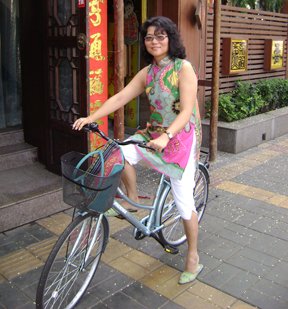 Zhang Lijia is one example of this trend. A fashionable and opinionated woman who favors two-tone glasses and bright dresses, Zhang meets me for lunch in an Italian café a couple blocks north of the Bookworm, near the apartment where she lives with her two children. Zhang has parlayed her talent, tenacity, and English language skills into a recent book contract in the U.S. Her memoir, Socialism is Great! A Worker’s Memoir of the New China, was recently published by Atlas Books, but Zhang still remembers the days when her assertiveness and smart outfits caused her problems.

In 1980, at the age of sixteen, under the auspices of a government program that encouraged parents to retire early and hand their factory positions to their children, Zhang accepted her mother’s pincers, pliers, and wrench and joined the ten thousand other workers at the Chenguang missile factory in Nanjing. “When I was in the factory, poems and short stories were a way to escape my boredom. Poetry groups would meet in parks and people’s homes. The Misty Poets appealed to me because they were not allowed, and because they wrote personal poems that talked about love and were filled with rich imagery,” she says, referring to the group of poets—Bei Dao, Gu Cheng, Duo Duo, Yang Lian, and others—who reacted against the Cultural Revolution of the 1960s.

Zhang, who is forty-two, is friends with a number of well-known Chinese writers from her generation, but she has chosen to concentrate on writing in English. In 1988, she met her former husband, Calum MacLeod, an English investment consultant and journalist, and moved to England. She returned to China in 1993 and, fluent in English, began a career in journalism. She assisted fellow journalist Ian Johnson for a time, then embarked on her own career, eventually writing features for Newsweek, the Washington Times, South China Morning Post, and others. Together with her husband, she edited China Remembers (Oxford University Press, 1999), a collection of interviews with Chinese rank-and-file citizens—a Korean War veteran, a famine survivor, a student from the Tiananmen protests, and others—who played roles in recent history and also gave birth to two children.

After September 11, Zhang says magazines cut back on staff, so she returned to England to study. “I never had a proper degree, and I always felt sorry for myself,” she says. While earning her MA in creative and life writing at the Goldsmiths College, University of London, Zhang completed a first draft of her memoir and began her novel, Lotus, about a prostitute from Nanjing, which is currently making the rounds of Beijing’s English-language book editors. “Women’s issues are one of the things that always interests me,” she says. “I’m hoping to write a story about the kidnapping of women [who are then sold to husbands in remote provinces]. It’s so modern here, and yet these medieval practices still go on.”

Despite her decision to write in English, Zhang believes there is more freedom for Chinese writers today. “There are less concerns now than ten or twenty years ago,” she says. “For example, China Remembers was stopped at customs. Our book may be confiscated, may be burned, but I will be fine.”

With success stories like Kesey’s and Zhang’s and the cost of a Chinese meal still hovering around two dollars, it’s a good bet that the community of English language fiction writers will continue to climb.