Rick Bass has been named the winner of the thirteenth annual Story Prize for his collection For a Little While (Little, Brown). The award honors an outstanding collection of short fiction published in the United States in the previous year, and comes with a $20,000 purse. 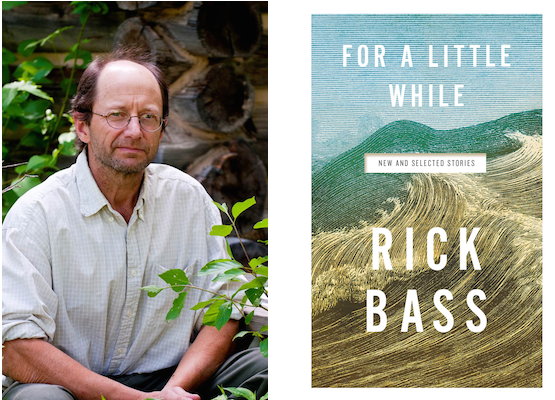 Two runners-up each received $5,000; they were Anna Noyes for Goodnight, Beautiful Women (Grove Press) and Helen Maryles Shankman for They Were Like Family to Me (Scribner). Randa Jarrar received the 2016 Story Prize Spotlight Award for her book Him, Me, Muhammad Ali (Sarabande Books). The Spotlight Award confers $1,000 for a story collection that merits further attention.

“Rick Bass’s gift at conveying the vastness of the American wilderness through a form as compact as the short story is a cause for wonder,” wrote the judges in their statement about the prize. “Again and again in this collection his stories demonstrate the form’s elasticity and expansiveness, its ability to evoke greatness of scale and time using little more than the seemingly modest tools of close observation, clear language, and rich sensory detail.”

Bass, fifty-nine, is the author of thirteen previous works of fiction and sixteen works of nonfiction, and is considered by many in the literary community as “one of the top practitioners of the short story form.” His fiction has appeared in the Atlantic, Esquire, the New Yorker, the Paris Review, among other publications. He has received multiple O. Henry Awards and Pushcart Prizes, and is the recipient of fellowships from the NEA and Guggenheim Foundation. His winning book For a Little While includes both new stories and selected stories from five of his previous collections. Bass currently lives in Troy, Montana, and is the writer-in-residence at Montana State University.

Established in 2004, the Story Prize is among the largest prizes given exclusively for short fiction. Previous winners include Edwidge Danticat, Tobias Wolff, George Saunders, Elizabeth McCracken, and Adam Johnson.