If you’re on social media, then you’re aware of Roxane Gay, a true powerhouse in literary circles. A longtime book critic and culture essayist, Gay had a banner year in 2014: Her novel, An Untamed State (Black Cat), and her New York Times best-selling collection of essays, Bad Feminist (Harper Perennial), were both published to critical acclaim, and she was announced as the editor of the Butter, the companion site to the culture website the Toast. 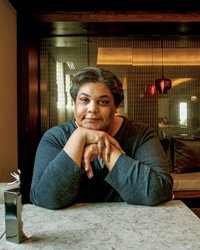 Originally from Omaha, the daughter of Haitian immigrants, Gay is an associate professor of English at Purdue University and is the coeditor of PANK magazine. Her memoir, Hunger, is forthcoming from Harper Perennial in 2016. You can follow her on Twitter, @rgay.

I first remember reading your work on HTMLGIANT. How did you get your start writing book reviews?
I started discussing books on the PANK blog, mostly sharing my thoughts on books I loved because I wanted to spread the good word. When I get excited about a book, I can’t stop talking about it. Before long, I was writing more formal book reviews for HTMLGIANT, trying to think through the books I was reading and what those books were trying to do. As a writer myself, I love pulling a writer’s choices apart to see what lies beneath. Mostly, I read a lot and have opinions about what I read and enjoy sharing those opinions. We all come to reading from such unique perspectives, so participating in the literary conversation is one of my favorite things.

What are some of the publications you’re reviewing for now? Do you typically select which books you review or are they assigned to you?
I review for the New York Times, Bookforum, Time, the Daily Beast, and other publications. Normally the books are assigned, but editors are great about knowing which books will be a good critical fit for a given writer. There are some editors, though, whom I can query if a title strikes me as particularly interesting and worthy of critical attention.

What kinds of things influence your decision in selecting a book to review? Do relationships with editors and/or publicists tip the balance?
I tend to review books that come to my attention. Some presses are really great about sending me their books—Riverhead and Graywolf come to mind immediately, but there are others. There are also editors who have a good sense of the kinds of books I will find interesting. Sarah Knight, an editor at Simon & Schuster, sent me Michael Farris Smith’s novel, Rivers, and I ended up reviewing the book because it was very much the kind of novel I love to get into—dark and gritty, with an intense sense of yearning throughout the narrative. Mostly, though, I choose books that make me think and feel, books I can’t put down, books that teach me something.

You are arguably one of the most popular and beloved literary people on Twitter. As a book critic, how important is social media?
Social media isn’t absolutely necessary for critics. A critic’s engagement with audience takes place within a review. It’s always fun if a critic is on social media and willing to extend the critical discussion beyond a given review, but it isn’t necessary. Look at James Wood. He’s an excellent critic, but as far as I know he doesn’t participate in social media.

That said, most of my favorite critics are on social media. They have a keener awareness of the world as it is, and how the world affects what and how we read, instead of the world as constructed in that pristine imaginary world where the only thing that matters is the words on a page.

What attributes do you think are necessary to be a good critic?
A good critic is honest, thoughtful, and passionate in conviction.

If you could change one thing about the book-reviewing process or the world of book criticism, what would it be?
I would love to never again hear a discussion about the scourge of positive criticism. That conversation totally misses the point of what criticism should be about. The idea that criticism can be too positive is also so condescending. It suggests that a critic cannot be passionately but intelligently enthusiastic about a book. I disagree. As a critic, it’s not my job to mindlessly slobber all over a book, but if I love a book, I’m damn well going to say so and explain why. Then I’m going to take the conversation further. I am saying nothing if I can only say I love a book.

What’s your favorite review you’ve written?
I love the review I wrote of Lidia Yuknavitch’s The Chronology of Water. That memoir remains one of the most powerful, intense, and gorgeous books I’ve ever read. Conceptually, Yuknavitch was doing so much that felt new and exciting. To be able to talk about the book and what I found in her words was a satisfying critical experience.

It seems increasingly common that the same books receive the vast majority of review attention. Why do you think that is? What, if anything, do you think should be done to try to change that?
A small part of me believes cream rises to the top, but that is only sometimes true. There are really great publicists working in publishing. When you see books with a great deal of review attention, publicists have been working their asses off to get those books in front of the right people, and they are also following up to make sure coverage is going to happen. There are also writers, of course, who are going to be reviewed no matter what they write. Jonathan Franzen has a book coming out this year and we can safely say, in advance, that the book will be covered in most every publication that reviews books. Joyce Carol Oates is another such writer. If you’ve got it, you’ve got it.

In the past few years there’s been some heated debate about the purpose of literary awards and the merits or drawbacks of “underrecognized” books winning said awards. What are your thoughts on this issue?
Awards are often very arbitrary, but I don’t have a problem with them. There is a pleasure to ranking things, books included. I have a problem with the narrowness of the people who decide which books win literary awards, both demographically and aesthetically. When underrecognized books win literary awards it is a hopeful sign that cream is, indeed, rising to the top even when a book doesn’t have the resources behind it to get the critical attention it deserves. I also have to wonder at the pettiness involved in not wanting underrecognized books to win awards. If the point of these awards is excellence, it should not matter where that excellence is found.

What books that you aren’t reviewing are you most looking forward to reading in the near future?
I am really excited about Andrea Kneeland’s How to Pose for Hustler and xTx’s Today I Am a Book. Both will be out from Civil Coping Mechanisms early this year. I’m also looking forward to reading T. Geronimo Johnson’s Welcome to Braggsville and Maggie Nelson’s The Argonauts.

Michael Taeckens has worked in the publishing business since 1995, most recently at Graywolf Press and Algonquin Books. His website is michaeltaeckenspr.com.