In January Carolyn Kellogg was named book editor of the Los Angeles Times. She’d been leading the newspaper’s online book coverage since 2008, when she launched the books blog Jacket Copy, and had joined the staff full-time in 2010, the same year she received a Times Editorial Award for feature blogging. 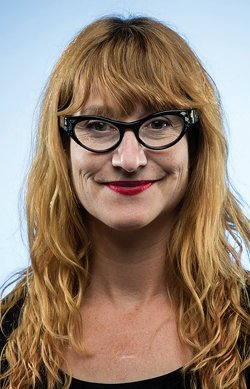 Kellogg grew up in Rhode Island and attended the University of Southern California. Her first job in new media was at Disney Interactive in the 1990s, and in the years since then she’s had many professional roles, including managing editor of the music-festival website Woodstock .com, editor of LAist.com, and web editor for the public-radio show Marketplace. As an early book blogger, in 2005 she launched Pinky’s Paperhaus—a podcast in which she talked to writers about music—which she shut down while she was in graduate school. Kellogg, who earned her MFA in fiction at the University of Pittsburgh, has retained a sense of the literary playfulness that marked those early projects: On Twitter (@paperhaus), she has attracted more than thirty-four thousand followers.

How has your job changed since your promotion to book editor earlier this year?
Almost entirely. I previously wrote daily for our blog and weekly book reviews and features. Now I assign and edit all our coverage for print and online. While I occasionally have a chance to write, overseeing our coverage is keeping me busy. I’m interested in bringing new voices into our pages, interesting thinkers, people you may not have heard of yet but who have a strong point of view. I consider that one of the great opportunities of my new position.

When Los Angeles Times editor Davan Maharaj announced your promotion, he stated that your role “will go beyond the printed word to explore ideas, film, art and society.” Are you reviewing other art forms as well, or is this all through the lens of literature?
In March we announced a lineup of ten critics at large, who will be engaging with books and ideas and culture in our pages: Rebecca Carroll, Alexander Chee, Rigoberto González, Marlon James, David Kipen, Laila Lalami, Viet Thanh Nguyen, Adriana E. Ramírez, John Scalzi, and Susan Straight—fantastic writers all, and I am delighted to be working with them.

There’s almost a default belief that people with MFAs in creative writing will either pursue jobs as teachers of creative writing or become acquisitions editors at publishing houses. How do you think your MFA degree has informed your role as a book critic and book review editor, and what advice would you give to current MFA students who want to pursue a similar path?
I think the idea that an MFA will result in a job teaching creative writing has been, or needs to be, recalibrated. There are simply many more MFAs awarded every year than there are creative writing jobs. Getting an MFA in creative writing is delightful, but it’s going to take a killer book or two before you’re sharing the faculty lounge at Princeton with Joyce Carol Oates. The best career advice I can give is to stay flexible: When I was in grad school and teaching comp and freelancing—copyediting—I wrote my first book review for the Los Angeles Times. If you really want to be a critic, you should feel comfortable expressing your opinions, join the National Book Critics Circle and use its resources, read widely, and pitch, pitch, pitch.

My MFA gave me the tools to see and understand craft. I can read an outstanding novel like Paul Beatty’s The Sellout and observe how its switchbacks of humor, politics, pop culture, and inverted satire are operating even at the sentence level. Or pick up a robin’s-egg-blue galley from a writer whose prior novel was a gothic pastiche and see that she’s accomplished something totally genius with structure. This was, of course, Jennifer Egan’s A Visit From the Goon Squad. And then there’s the downside—spotting the novel with fifty pages of jewel-like prose, polished to death in workshop, that fails to maintain that level of attention and concentration throughout.

You were recently interviewed on WNYC’s On the Media about “why the publishing industry isn’t in peril.” Music to everyone’s ears! What makes you feel optimistic about the future of the industry?
One of the things we talked about in that interview was adult coloring books, which really helped drive print book sales in 2015. They’re billed as a respite for grown-ups who are seeking the calm of coloring when turning away from staring at computer and phone screens. But another big sales driver were memoirs by YouTube stars, which sold to tweens—an entirely different demographic, seeking a connection to these stars that’s different from their frank, engaging videos. As long as people are turning to books from different age groups, for divergent reasons, publishing has reason to be optimistic.

The L.A. Times Festival of Books is one of the premier literary festivals in the country. How involved with it have you been over the years?
The woman in charge of programming the festival is Maret Orliss; she and her team do an amazing job. Over the years she has invited me to help select authors, organize panels, and come up with panel names; this year she went easy on me because of my new responsibilities. My biggest task in 2016 was doing two on-stage interviews, with Susan Orlean and Buzz Aldrin.