Reader’s Block, Kristen Roupenian on Writing About Sex, and More

At the New York Times, illustrator Grant Snider chronicles a debilitating condition that deserves more attention: reader’s block, the ailment that features both “crippling ennui” and the problem of being “overwhelmed by infinite possibility.”

“Write a book about the way young women use words to fight back against those who want to reduce them to sexual objects, and you may struggle to prevent yourself from becoming similarly reduced.” Kristen Roupenian on Mary Gaitskill’s influence and the perils of writing about sex. (Guardian)

“I write about the things that I think about too much, and usually once I’m done writing about it, I stop thinking about it too much.” Jia Tolentino talks to the Creative Independent about a rhythm of productivity and rest, writing for the New Yorker, and her new essay collection, Trick Mirror.

In Rome, Italy, actor Kevin Spacey performed in public for the first time since prosecutors dropped a case accusing him of sexual assault last month. Standing beside Boxer at Rest, a bronze statue at the Palazzo Massimo alle Terme museum, Spacey read a poem by Gabriele Tinti celebrating a fighter who declares, “The more you’re wounded the greater you are.” (CNN)

“Although there were times I wondered if I would trust him with a prescription for Vitamin C, I half hoped he would one day present me with a magic pill to cure my Tourette’s. What he gave me instead was much more: an insight into myself, a window into his own quirky personality, and a new awareness of aspects of human nature.” Photographer Lowell Handler remembers neurologist and author Oliver Sacks. (New York Review of Books)

At New York Times Magazine, novelist Javier Marías talks to Giles Harvey about how Fascism lives on in Spain. “There is a taste today for exposing oneself to the base and the vile, to the monstrous and the aberrant, for peering in at the infrahuman and rubbing up against it as if it had some kind of prestige or charm.”

And new Simon & Schuster imprint Avid Reader Press is off to a strong start, with its inaugural title, Three Women by Lisa Taddeo, making a number of best-seller lists. (Publishers Weekly)

#MeToo: Crafting Our Most Difficult True Stories
by Tracy Strauss | The Literary Life 8.15.18

Using elements of craft to tell powerful stories about sexual assault and trauma, with examples from work by Roxane Gay, Alexandria Marzano-Lesnevich, Megan Stielstra, and others.

“There are very few rules that can’t be broken,” says the author of six books of fiction and one essay collection in this wide-ranging interview.

The author of Black Light explores the pleasures of cutting a manuscript down to size. 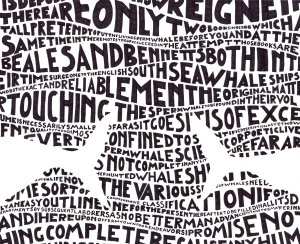 In the graphic adaptation Moby-Dick in Pictures, released by Tin House Books in October, artist Matt Kish presents an illustration for every page of the 552-page classic. These eleven images are from Chapter XXXII: Cetology, in which Herman Melville...
X