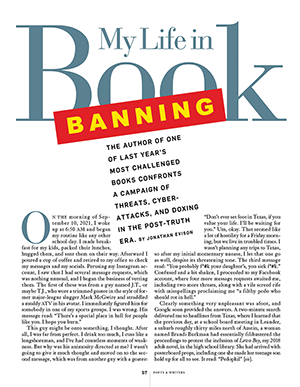 Letters
Feedback from readers
I read with interest Jonathan Evison’s “My Life in Book Banning” (September/October 2022). The author’s experiences with threats and the banning of his book over misunderstandings and blatant falsehoods should frighten not only authors, but anyone who values truth and free expression. I do have one comment, however. Evison states, “It seems obvious on the surface that these self-appointed gatekeepers don’t want ‘those people’ to have voices, and by ‘those people’ I mean Black and brown and gay and trans people—in short, anyone who doesn’t fit neatly into their white, straight, Christian ideal of America, a country largely built on the backs of nonwhite, non-Christian people, and a country traditionally celebrated for its pluralism.” I can’t argue that. But I do object to what has become a common inference: that all American Christians are inherently conservative, bigoted, hateful, and racist. Unfortunately a large faction of them are—they’re also the most vocal and receive the most press. As a Christian I have conversed with, prayed for, and battled both sides on social media: the Christians who have turned their backs on the teachings of Christ (ignoring “love your neighbor as yourself” in favor of “build that wall!”) and the liberals who believe that all Christians are hateful, right-wing zealots. In the process I’ve lost more than a few friends—most of them, admittedly, on the right. Apparently my being a Christian in favor of equality, love, and acceptance is something they just can’t forgive. A faction of Christians still exist who quietly feed the poor, help the needy, accept the stranger, and welcome the gay, the addicted, and the feminist into their churches. And yes, we vote blue. Please try not to judge us all based on the actions of some. We’re speaking out, but loving one’s neighbors doesn’t get much press these days. Thank you for Evison’s article. It is timely and relevant, and I am praying for the safety of him, his family, and all of us who persistently write what other people just don’t want to hear.
Lisa Hewitt
Sheboygan, Wisconsin

I really enjoyed your May/June 2022 issue on writing contests. As always, I read the articles and scanned the Classifieds for opportunities that might work for my writing. I marked one writing contest I had never heard of and searched the web for poetry by the judge. I could relate to his work, so I entered the contest. Some weeks later I was notified that I won second place, plus an honorary mention. I’m looking forward to seeing my work in print in January 2023 and receiving the judge’s comments and a cash prize. I just thought you might like to hear how helpful your publication can be to a poet living out in the sticks.
Susan Wolbarst
Gualala, California