Since moving from Illinois State University to the University of Illinois, Urbana-Champaign, in 2007, Dalkey Archive Press has shifted into a higher gear. The independent press recently announced a new distribution deal with Norton, which will make its books available to more readers around the world; it is also launching a new European fiction anthology this fall. Associate director Martin Riker spoke about the recent developments. 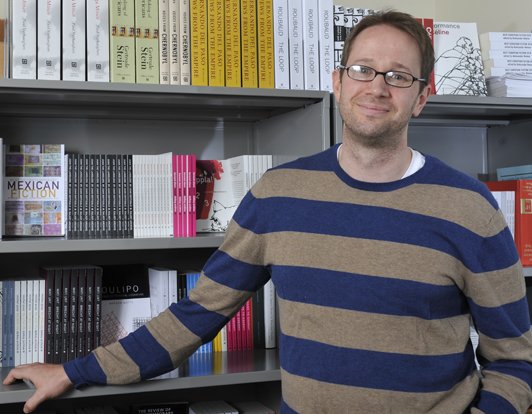 How did the Norton deal come about?
We've done our own sales for years, which allows us to have personal relationships with the independent bookstores and the chains as well. That can be really helpful for a press like us, so we resisted going with any kind of sales team for a long time. But now we're planning some bigger projects that we think have the potential to reach more people than anything we've ever done before. One is a series of anthologies called Best European Fiction. Norton was just the first place we thought of. We met with them and they were excited about the idea from the beginning.

What's the raison d'être of the press?
To promote a vision of literature within the culture that's larger than the popular culture of the moment. We're interested in keeping books in print that have gone out of print, because we think the literary conversation is larger than what's happening right now. It also means we're interested in publishing books outside of U.S. borders, because we think the literary conversation is broader than just what's happening right here. We get labeled a "translations publisher" because we're doing about 70 percent original translations, which I think is more than any other publisher in this country. But we're not a translations publisher; we see literature as an international art form.

For years you were known for reprints.
That's how we got started. The origins of Dalkey Archive are in our critical journal, the Review of Contemporary Fiction, founded in the early eighties. The idea was that there were a lot of important authors who weren't being written about, so the Review was to provide a way for people to read about their work. But the books of the authors who were being covered in the Review were out of print. So Dalkey started as a reprint publisher to bring back books by the authors covered in the Review. We still do them, but not as many.

How's the press doing financially?
As a nonprofit, we've diversified our funding base. Because we do translations, we get support from a lot of different countries. The European anthology, for example, is largely underwritten by Arts Council England, the British equivalent of the National Endowment for the Arts. We have support from the University of Illinois, and we have sales income, which has been steady, except that returns have increased, as they have for everybody.

What was his role?
He's the one who went to the chancellor and said, "These guys are really special. We should try to make this happen." And the chancellor got on board.

While it's safe to say the twenty-first century has so far not been a great time for American diplomacy, a handful of new poetry anthologies, from Norton, Dalkey Archive Press, North Atlantic Books, and Graywolf Press, offer proof that American...

No Translation Takers
by Joe Woodward | News and Trends 7.1.05

Despite a $10,000 incentive from the Association of American Publishers to United States publishers willing to translate, publish, and promote contemporary Iranian fiction, no commercial houses have come forward since the initiative was...

By presenting seventy-three poets, all of whom the editors believe constitute what Charles Bernstein famously called "official verse culture" as well as its unofficial, avant-garde counterpart, the new anthology American Hybrid strives to...