By the time Ted Kooser was appointed the 13th poet laureate of the United States last August, readers may have forgotten that the position even existed, due to the quiet and relatively uneventful tenure of the previous laureate, Louise Glück. But Kooser, the author of 10 volumes of poetry, most recently Braided Creek (Copper Canyon Press, 2003) and Delights & Shadows (Copper Canyon Press, 2004), is making some noise with his first initiative. In February, Kooser launched American Life in Poetry, a weekly newspaper column featuring a poem and a brief introduction, which is distributed free to any paper wishing to publish it. Talking to Kooser about his new project, one gets the impression that the active and outspoken poet will take advantage of his public role. 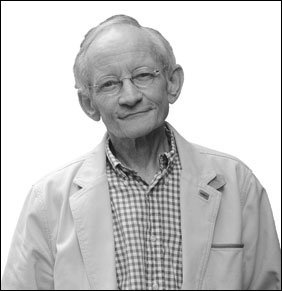 You are the former vice president of Lincoln Benefit Life, an insurance company in Nebraska, where you worked for 35 years. Wallace Stevens, of course, was the vice president of Hartford Accident and Indemnity Company for 21 years. He once said, “It gives a man character as a poet to have this daily contact with a job.” Did you agree?
It’s my impression that all of us who are writing have some sort of community for which we are writing, and it is usually a community with which we interact frequently. If you are a member of an English department, you tend to write things that your colleagues in the English department will appreciate and understand, and so on. I was working all those years among people who were not reading poetry, whose interests were altogether different from that, and I would try my poems out on them—my secretary, particularly, who had not read poetry probably since she’d been in high school. She would say, “Well, I don’t understand this,” and I would do some work on it and try to get it so she could understand it. As a result of that, my work became more accessible to a broader audience. Even though I’m no longer there, I still see that broader audience as being what I’m after.

How does that influence your current position as poet laureate?
I’m dedicated to trying to convince people who don’t read poetry that there are things in it for them, and to do that by example—to show them poems that might do something for them. The American Life in Poetry project is like that. I’m going to select poems that an average newspaper reader could pick up on and understand.

Tell us more about American Life in Poetry.
Each column will have a few sentences introducing the poem, followed by the poem. I’m going to have to use short poems because most papers are concerned about column inches, and I want the poems to be the kind that an average newspaper reader could understand and enjoy. Because I expect the column to have extensive circulation, I am not going to accept unsolicited poems. I will have a couple of people helping me with permissions and correspondence, supported by a grant from the Poetry Foundation, but we won’t be equipped to look at thousands of manuscripts. Nor will we be able to pay for permissions, since the column will generate no revenue. What we’ll offer, though, is the chance to get a writer’s poem, and name, and the name of any recent books, in front of tens of thousands of readers.

How does it feel to join the list of poets who have held your position as poet laureate?
I still can’t quite believe it. To sit in that little office in the Library of Congress, surrounded by the photos of my predecessors, makes me feel very, very small—the way I felt as a child when I broke a neighbor’s window with a ball and had to go up to the door to apologize.