Compared to the ninety-eight-year-old Poetry Society of America and the eighty-seven-year-old PEN American Center, the Asian American Writers’ Workshop, founded in 1991, is still in its infancy as a nonprofit literary organization. But Quang Bao, who stepped down as executive director in January, says the Workshop has already accomplished exactly what it set out to do: to support the Asian American writing community and broaden its readership. The thirty-eight-year-old says the organization “has been part of the success and the flourishing” of Asian American literature during a period that has seen a rise in the popularity of authors such as Ha Jin, Jhumpa Lahiri, and Arundhati Roy. Of course, Bao has good reason to credit the organization with such an impact: Before quitting his post, he had worked at the Workshop for over half of its seventeen years in existence. 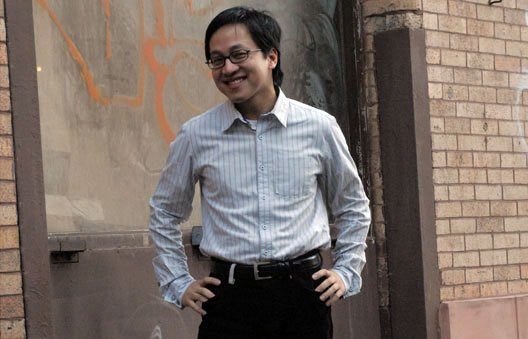 Bao was initially hired in 1999 as the Workshop’s managing director. He was named executive director in 2000, and over the next eight years led the organization as it grew to its present membership of eight hundred, developing programs—readings, panel discussions, workshops, and an awards series—that drew up to eleven thousand participants annually. In announcing his decision to step down, Bao, a writer whose work has appeared in the Boston Globe, the New York Times, and elsewhere, mentioned his desire to have more time to write. As of this writing, a successor has not been named.

A month before he stepped down, Bao spoke at the Workshop’s loft space on West Thirty-second Street in New York City about the evolution of the organization and its role in the development of Asian American literature.

What compelled you to join the Workshop initially?
I wanted to be in a community of writers. There was something about being twenty-nine, and wanting to be in New York. I knew that I wanted to work in nonprofits and arts, and because I love literature, it just made a lot of sense.

What programs did you set in motion that the Workshop will likely perpetuate?
We had all kinds of august writers and editors come in and do things that are good for other writers, but…you didn’t have to have a book to have a relationship with the Workshop. We had to create programs and projects that were interesting and fun for writers. The question for the board and the new director will be, what is next for an organization that started out as trying to bring Asian American literature into the mainstream and make it more widespread? The work isn’t over. There’s a reductive thinking about the number of Asian American authors a mainstream publisher will take on.…

Like, “We can take one or two…”
“…and the market is saturated.” Small presses have taken on a huge responsibility in promoting emerging Asian American authors. That’s where the relationships will develop for the Workshop, because that’s where some of the exciting writing is taking place. They may or may not be able to deliver a similar kind of sales record [as commercial publishers]. But the world doesn’t need more books—it just needs good books.

Do you have any advice for Asian American writers in different parts of the country who might feel that there is not so much of a community where they are?

Even if you’re not in an urban area with a literary presence, you can do the thing that started the Workshop: six people sharing work and talking about ways in which they could support one another. My advice is to find that group of people who can take your work on its own terms.