Last April, the University of Iowa Writers' Workshop selected fiction writer Lan Samantha Chang to succeed Frank Conroy and become its fifth director. Conroy, who had stepped down due to illness in the summer of 2004 after eighteen years in the position, died on April 6, 2005, after a long battle with colon cancer. Earlier in the year, Chang, along with the other finalists for the directorship—fiction writers Richard Bausch, Ben Marcus, and Jim Shepard—traveled to the university's campus in Iowa City, where they gave a public reading, led a student workshop, and were interviewed by students and faculty. 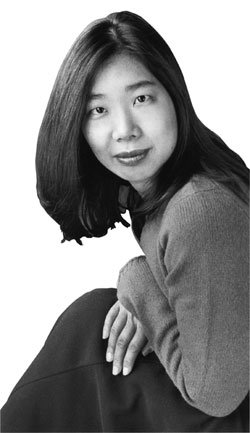 Chang received her MFA from the program in 1993. She also holds degrees in East Asian studies from Yale and in public administration from the Kennedy School of Government at Harvard. Prior to her selection, she was the Briggs-Copeland Lecturer in creative writing at Harvard. She also taught at the Iowa Writers' Workshop twice in three years, beginning in 1999. The author of the novel Inheritance (W.W. Norton, 2004) and the short fiction collection Hunger (W.W. Norton, 1998), she is the first woman and the first Asian American to head the workshop.

On the eve of her departure from Somerville, Massachusetts, for Iowa City, Chang spoke about her new role as the leader of the country's oldest creative writing program.

How does it feel to follow in Frank Conroy's footsteps?
Frank is irreplaceable. That's actually a good thing for me, because I know that no one will expect me to be anything like him. I was a student in the workshop when Frank was the director, and what I loved about being there with him was the sense that he always had the bigger picture of the workshop as a place that has not only a grand tradition in American letters, but is also a very vital, extraordinarily unusual community for creative work.

The program is known as one of the most prestigious in the country. What do you think is the key to maintaining that success?
I think the key is that we focus on writing. We're interested in creating an atmosphere where writing and writers can flourish; in that way, the setting of Iowa City is ideal. This atmosphere gives people the sort of heady freedom to pursue writing as if there were no other concern in the world.

The selection process for the directorship sounded unusually intense. What was it like?
It was quite a daunting process. I had been told I was a finalist and felt that I should keep it a secret, but when I came to my office and picked up my messages, I had all these calls from the AP. To come and give a campus talk is common in an academic job, but to give a campus talk in which every class, lecture, and reading is miked and taped and in which photographers are present, was interesting.

Is there anything you've learned from your own writing that might impact the way you run the program?
It's important to be patient and to always keep in mind that good writing is more important than achieving rapid success as a writer. The best writing reveals the texture and the depth of the consciousness that wrote it, and that can take a long time. I think it's hard to keep that in mind when you're a student and you know that you have these two years in which to produce work, and after that, your future is uncertain.

The proliferation of MFA programs remains a subject of debate. What is their value in contemporary culture?
That question is answered differently by everybody who's gone to an MFA program. But what I have noticed in my observations of different schools is that students are always interested in finding a place and a group of people that allows them to pursue a writer's true work, which is thinking. Our society focuses so much on bustle and what it considers growth and accomplishment that it forgets that the human consciousness is actually an enormously crucial part of who we are. I think that these programs exist to enrich us in that way.

Doug Diesenhaus is the editorial assistant of Poets & Writers Magazine.

Jayne Anne Phillips, who is in her second year as program director of the new MFA program in creative writing at Rutgers University's Newark, New Jersey, speaks about the program's genesis, its connection to Newark's literary and cultural...

Matthew Shenoda speaks about his new role as the Assistant Provost for Equity and Diversity at California Institute of the Arts, in Valencia, part of an institute-wide initiative to promote intercultural awareness and develop support mechanisms...