April Ossmann recently stepped down as executive director of Alice James Books, the Farmington, Maine–based nonprofit cooperative poetry press founded in 1973; after more than eight years in the post, she left to begin working as a freelance editor and small press consultant. Carey Salerno has since been named acting director. The author of the poetry collection Anxious Music (Four Way Books, 2004), Ossmann spoke about her time at Alice James from her home in Post Mills, a snowy hamlet in eastern Vermont. 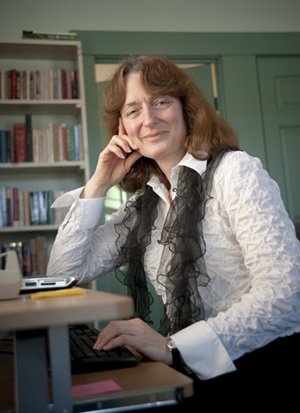 Why did you step down?
I was hired with a mandate for growth and change. They wanted me to professionalize the press and grow it. When I took over, the budget was $114,000; now it's $260,000 and...I'm sorry. What was the question? [Laughs.] I got distracted there!

Why did you leave at this time?
I had in mind what I wanted to achieve for them and I pretty much achieved it.

How do you account for the relative health of Alice James in the current climate?
Really hard work and passion on the part of myself and the staff and the board. At Alice James you get hooked. It's a really wonderful press, a different one. Being a cooperative, it's just different: It's run by a bunch of poets. I found it irresistible, and I've seen it happen over and over to board members and staff. You get hooked and you care and you work really hard on its behalf. Hopefully we made a bunch of good decisions along with the passion and the hard work. I was determined to see the press in solid financial shape because when I took over it was technically in the black, but frankly teetering on the brink financially. The press...wasn't sustainable at the level it was at and I was determined to make a difference.

What have you seen change about small press publishing?
I feel like the whole poetry world has gotten much more professional. I think presses are much more savvy in terms of the business and marketing and publicity end of things—they need to be, given what the environment is like for literary publishing. I would also guess there are somewhere close to twice as many poetry volumes being published now than eight or ten years ago. So when people are sort of lamenting, "Ah, literature's dying," I don't agree.

Is there one book that stood out in your eight years at Alice James?
I'd have to say [Brian Turner's] Here, Bullet, which has now sold, I think, 23,500 copies. It's not just the quality of the writing, which I think is very good, but that was a book that felt—and still feels—important socially, culturally. It's one of those books, I feel—as a responsible citizen whose taxes are going to support the war—that everyone ought to read, whether you support the war personally or not. In literary publishing we always talk about reaching those elusive general readers, and we sort of expect them to come to our ivory tower and I don't think they're going to do that. You have to go to them. Here, Bullet was a book that I think went to them.

Any advice for poets trying to get their first book published?
Don't be discouraged, read as much as you can, and get some help editing it. And it doesn't have to be me; it can be any of your poetry peers or colleagues. A lot of poets send manuscripts out before they're at all ready. At some point you have to take the plunge and see where you fall in terms of your manuscript being competitive, but I always advise poets to have a couple different people take a hard, critical look at the manuscript and let them know what's working and what isn't before they send it out.