The Guerilla Poetics Project (GPP), a loose alliance of poets and independent publishers, is in the business of giving away poetry for free. Nothing new about that, of course—online literary magazines and some chapbook publishers have been giving it away for years—but the GPP's mission and the methods by which they achieve it represent a radical shift away from the traditional modes of small press marketing and distribution. "We are putting the world on notice," reads the GPP's manifesto, published on the group's Web site. "We are here; we are writing; and we want your attention. If you're not willing to give us your attention, then we will take it from you. We will be heard. Are you listening?" 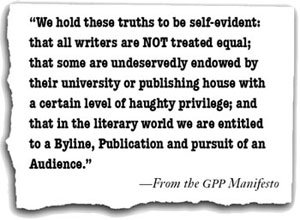 The GPP utilizes a marketing strategy whereby "operatives," who donate twenty-five dollars annually to cover the project's postage costs, sneak poetry broadsides printed by the collective into bookstores and libraries and slip them into "target books," or titles of special interest to the collective (the list includes, among others, works by Charles Bukowski, John Fante, and Fyodor Dostoevsky). The broadsides direct readers to register their findings on the group's Web site, www.guerillapoetics.org, at which point they can also sign up to be operatives. According to an ever-growing interactive map charting the project's success rate, as of this writing 174 broadsides have been found in bookstores and libraries in cities across the United States and overseas. One reader found a broadside tucked inside 88 Poems by Ernest Hemingway at Silver City Public Library, in Silver City, New Mexico; another found one inside Dostoevsky's Crime and Punishment at a Waterstone's bookstore in Birmingham, England.

The collective was formed in July 2006 by a group of ten poets who strive for anonymity, thus enshrouding their covert activities in a veil—albeit a thin veil—of secrecy. Some members have been acquainted for years, while others met around the time the project was finding its legs. Through e-mails, letters, and phone calls, they discovered a common devotion to art, indie publishing, and the promotion of the written word, specifically the work of lesser-known writers.

Since then, the GPP has been selecting, printing, and distributing the work of a variety of contemporary poets—mostly members of the collective, who also solicit work—at a rate of two broadsides a month. The 4 1/2 x 5 1/2 inch broadsides, hand-printed on card stock, are often accompanied by minimal illustrations. Initially, the print run for each broadside was five hundred copies, though the group has since replaced its 1914 manual letterpress with an electric model, and production has increased. Approximately two thousand copies of each poem are now printed and mailed in batches of six to operatives across the country and around the world.

One of the collective's founding members, a Salt Lake City poet (and chemist) whose work has been published by a number of indie presses, says his motivation in starting the covert publishing collective was to end the insular cycle of submitting work for publication. "Why should ten, or fifty, or a hundred of us submit work to places that only are being subscribed to by the same ten of us? Why not pool our resources and organize—unionize almost?"

The ten founding members, none explicitly named on the collective's Web site, range in age from twenty-four to forty. More than thirty-five poets—among them an employee at a district attorney's office, a Web site designer, a social worker for the mentally ill, and even a bookstore clerk who regularly smuggles the broadsides into the store where he works—have had their work printed and distributed by the GPP.

The collective advertises no physical office; a handbook mailed to operatives states that the group's broadsides are "printed in an undisclosed location." A postal address is provided on the Web site, however, and those without PayPal accounts who wish to purchase GPP stickers, drink coasters, or other merchandise are directed to contact Bill Roberts, who lives in Dover, Delaware. Roberts is also an operative; his bio note reads, in part, "He is rumored to be the printer of some of the broadsides by the Guerilla Poetics Project, but that cannot and will not be confirmed or denied."

Finding a poem in a recently purchased book would be a pleasant surprise for most readers, but what do librarians and bookstore owners think about this kind of guerilla marketing? Jenna Freedman, a librarian at Barnard College, is divided in her reaction to the idea of poetry being smuggled into the stacks. "I do find the guerilla part cool and exciting, but on the other hand I'd feel not trusted," she says. "I'd rather be a partner than someone to sneak behind." While unfamiliar with the GPP, Freedman says she has been irritated by the unsanctioned placement of zines into Barnard's collection.

Terry McCoy, co-owner of St. Mark's Bookshop in Manhattan, doesn't find the prospect of GPP operatives visiting his store annoying, nor does he see the need for covert activity, at least at St. Mark's. "We have a policy of taking anything from anybody," he says. "You can always bring anything in and we'll carry it."

Ellen Moynihan is a writer, the managing editor of the New York Tyrant, and cofounder of the guerilla art collective House of Malcontents. She lives in Brooklyn.