When poet and critic Alfred Corn comes upon an ampersand while reading a contemporary poem, it creates a slight, and slightly irritating, break in his concentration. “It sparks a cognitive blip, which I immediately get past, but I’d actually rather not have to go through the process, even though it’s very short,” Corn says. “It doesn’t save an enormous amount of time for the writer, so its use must be based on the feeling that it adds a poetic quality to the visual aspect of a poem—and only to the visual aspect since, clearly, it can’t be heard when the poem is read aloud. That much said, if I was moved by other aspects of a given poem, the ampersand wouldn’t be an insurmountable obstacle to liking it.” 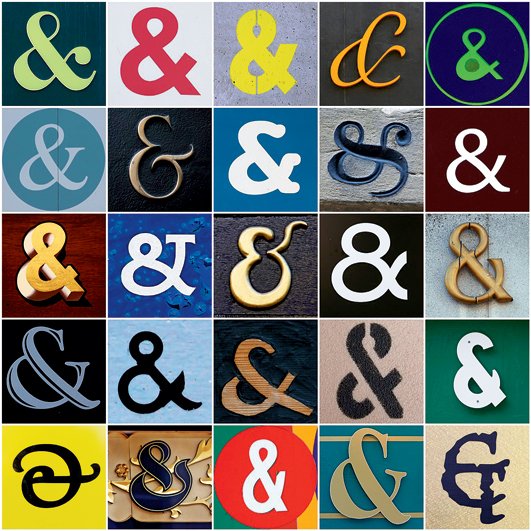 Even so, for nearly a century, the ampersand has been a key feature of certain strands of American poetry. To understand the ampersand’s history in the genre, one must return to the character’s origins—which are somewhat obscure, in part because they date back to antiquity. The modern-day ampersand is believed to be a descendant of an earlier Latin logogram—a combination of the cursive letters e and t (et meaning and)—that was part of a shorthand system invented by Marcus Tullius Tiro, secretary and former slave of the Roman writer Cicero. The heyday of the ampersand was in the United Kingdom in the seventeenth through the mid-nineteenth centuries, when it was commonly used in business documents and, perhaps most notably, in the titles of companies—partnerships in particular, such as Fortnum & Mason and Marks & Spencer. It’s still used in many names of firms and publications, including that of this magazine, now celebrating its twenty-fifth anniversary under the banner of a pair of nouns festively joined by an ampersand on every cover.

In the twentieth century, the ampersand was rediscovered and exploited, variously, by several generations of American poets, especially those eager to declare their position outside the academic mainstream. Several of the Black Mountain and Beat poets used the ampersand freely, and with conspicuous inconsistency, as an occasional substitute for and—notably Allen Ginsberg in “Howl,” with its “blond & naked angel.” The relentlessly experimental e. e. cummings was fond of the ampersand, as was Frank O’Hara. A number of African American poets also adopted the figure, as Amiri Baraka did in “Monday in B-Flat”: “I can pray / all day / & God / wont come.” The ampersand in American poetry reached its apogee in John Berryman’s The Dream Songs (Farrar, Straus and Giroux, 1969), in which the poet used the mark to undercut the erudition, complexity, and formality of his rhyme and stanza structures, as in the sequence’s opening:

I don’t see how Henry, pried
open for all the world to see, survived.

What he has now to say is a long
wonder the world can bear & be.

Throughout the mid-twentieth century, such uses of the ampersand suggested experimentation, casualness, a desire to tweak the sniffing nose of literary decorum, and a certain kind of haste. “It is, after all, an abbreviation,” Harvard scholar Helen Vendler pointed out in an e-mail exchange. The ampersand became a mark of originality in American poetry, part of a customized system of punctuation whose earlier elements had included Walt Whitman’s ellipses, Emily Dickinson’s dashes, and cummings’s quirky parentheses and lowercase i. (Later, some of the New York School of poets deployed the exclamation point in similar fashion, even as A. R. Ammons was making his own highly idiosyncratic use of the colon.) Other poets embraced the ampersand for its mere presence on the typewriter, whose keys they were determined to “play” in virtuoso style.

“When I was starting out as a poet, it seemed very refreshing that there was the possibility of playing the typewriter as if it were a piano, and making use of things that weren’t available when your craft depended on pen and paper,” recalls poet David Lehman, the longtime editor of the Best American Poetry series. “Against the background of most midcentury poetry, poems that used this new system of punctuation were in deliberate dissent, and a lot of us experimented with some aspect of this. I used ampersands instead of the word and a lot when I wrote journal poems, which emphasized the spontaneity and improvisational nature of the writing. There was always a lot of pleasure in this for me, in part because it guarded against taking yourself too seriously.”

More recently, Lehman has come to view the ampersand in poetry as having ossified into just another convention. “I’m prepared, when I read a poem, to be impressed by the use of an ampersand if it’s done well. But it’s so frequently used that it has ceased to mean very much. It’s come to seem old hat, or at least too easy a gesture.”

Yet the ampersand continues to inspire many contemporary poets, who use it for their own highly specific reasons. In some cases—such as that of Alex Lemon, who employs the figure freely in his collection Fancy Beasts (Milkweed Editions, 2010)—the ampersand can be seen as a sign of affiliation or lineage; one of Lemon’s primary influences is Berryman. Lemon’s friend and fellow poet Nick Flynn appreciates the ampersand’s graphic qualities and, by extension, the way its use reinforces the idea of a poem as a “constructed object,” as Flynn puts it.

Perhaps no poet in recent memory has used the ampersand as copiously as Nikky Finney in her collection Head Off & Split (TriQuarterly Books/Northwestern University Press, 2011), winner of last year’s National Book Award. “I’m fascinated with the ampersand, and think of it—as someone said—as the twenty-seventh letter of the alphabet,” she says. “For one thing, I find it very, very beautiful as a graphic. It’s also the confluence of two letters that mean a great deal to me, e and t, which happen to be my mother’s and father’s first initials. In Head Off & Split, which is very much about my parents in many ways, I use it accurately, in terms of punctuation, and inaccurately, based on its aesthetic presence in the line. It has a lot of emotional resonance for me in ways I can’t fully explain—I’m sort of obsessed with it.”

Finney isn’t alone in her fondness. Poet John Reibetanz writes of the ampersand’s attraction in a poem titled after the character—which was in fact once the finale of the English alphabet:

the plump, open armed ‘&’ waving goodbye
from the end of the old-world alphabet
like an innkeeper framed in doorway candlelight,
farewells swelled with hopes of come again.

And so the curious character lives on & on.

I think you make as strong a case as can be made for it, Kevin.  I just wonder if the poets using it realize they are using Latin rather than English. I suppose if poems came to us always hand-written, I could understand the usage, as a timesaver. But we read poems when they are in print.  And I go back to my point that when the poem is read aloud, you can't hear the ampersand. So if it's an essential part of the meaning of the poem, the poet should signal visually every time it appears on the page.  Granted, that would be a distracting affectation. And why don't those who use t also use "w/" for "with" and"w/o" for "without"?  Are you next going to write an article about poets who write without upper-case letters, including for the first-person singular pronoun?  It's something else I find distracting, though, again, many peoplelike it.

Go easy on the amp, it's the only one with any character. 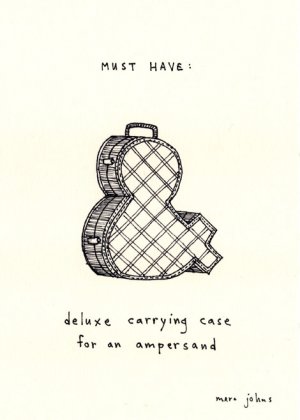 The ampersand has survived from ancient origins to the present day, where its usage is ubiquitous, and stylistically varied. In this slideshow, we train our lenses on the logogram's incarnations in everyday life. You can help add to our exhibit by...
X