Poetry at the Crossroads of America

Last spring I embarked on a modest project. Having photocopied 10 of my favorite poems—by poets living and dead, from several different countries—I stapled them into an anthology and stood on a sidewalk in Times Square, where I read the poems aloud. I had no other gimmicks and no amplification. I did this on several occasions, always bringing a friend along for moral support and to assist in handing out free copies of the anthology, which I titled "Antidote." 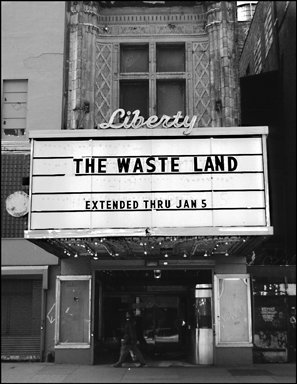 I suspected reading a poem in Times Square would be like throwing an ice cube into a forest fire. I didn't know what place poetry—to my mind the quietest art form—would have in New York City's media center, with its towering walls of morphing digital imagery and advertising copy, its traffic converging from every direction. Assuming the answer was "none at all," my friend and I found our way to the sidewalk in front of the MTV studios, at Broadway and 45th Street, and began reading.

In compiling my anthology I chose poems that not only appealed to me but would, I thought, speak to a wandering public. My anthology consisted of "Casabianca" by Elizabeth Bishop, "From an Island" by James Tate, "Elegy" by Tomas Transtromer, "Song" by John Ashbery, "Lacquer" by Tomaz Salamun, "Debris of Life and Mind" by Wallace Stevens, "This Be the Verse" by Philip Larkin, "I Walked Past a House Where I Lived Once" by Yehuda Amichai, "Saint Judas" by James Wright, "Landscape" by Mark Levine, and "When You Are Old" by William Butler Yeats. These were short, lyrical poems that each expressed with unguarded emotion the condition of its speaker.

As a young poet and reader of poetry, I have long known that great poems can express with forceful economy life's brutality and sweetness. But the American public's relationship to poetry is complicated. At best, poetry seems to be perceived as a rare salve to be applied in the wake of national tragedy; at worst it's an elite parlor game. Much of the blame for such perceptions can be placed squarely on American poetry itself, which has privileged difficulty over clarity—in the process taking itself right out of public view.

I don't exactly fault modern American poetry for being difficult. The sensory experience of Times Square is as difficult as any poem and still we live within it. The power of great modern poetry is that it takes the monstrosity of Times Square and locates the human being at its heart. It expresses with pitch-perfect lyricism the poignancy of a jumbled world. When I read the Ashbery poem, people stopped.

The song tells us of our old way of living,
Of life in former times. Fragrance of florals,
How things merely ended when they ended,
Of beginning again into a sigh.

Something was happening. These weren't tweedy academics or anemic, shuffling, poetry scenesters. These were restaurant workers, postal carriers, kids, and businessmen. They were construction workers, foreign tourists, school groups, and cops. Not everyone paused—it's New York City, after all—but so many more did than I had anticipated. Some people stopped dead in their tracks. Others veered around and doubled back, unsure of what they had heard. I caught a young guy in a suit smiling as he took an anthology and said, "I can't believe people even write this stuff anymore."

The anthologies disappeared at a remarkable clip—far more rapidly, by my estimation, than did the pamphlets handed out by the Evangelical Christians across the street. I can't presume to know what relationship the people I met on the street had with poetry, but given poetry's famously marginal status I was surprised it got any attention at all. I believe they stopped at first because these are odd words to hear seemingly out of nowhere, but they took an anthology or stayed to hear the poem read because it's poetry and it's Ashbery, or Stevens, or Yeats, and it made them feel human.

Stopping in the middle of the busiest intersection in the country to listen to a poem is a radical act in a hyperactive age. I started reading poetry in Times Square because I felt I had kept its fine secret for too long. Frank O'Hara can change your life. Yehuda Amichai can change your life, and so can Elizabeth Bishop. You need only slow and listen.

Sam White lives in Brooklyn, where he writes poetry and works as an illustrator.