Will there be any record of what you’ve done, what you plan to do?” poet Nick Lantz read to a packed ballroom at the Association of Writers & Writing Programs (AWP) conference in Chicago in early March. Joined on the panel “Political Poetry: America and Abroad” by fellow poets Matthea Harvey, Tom Sleigh, and Jeffrey Yang, Lantz recited the poem “Will There Be More Than One ‘Questioner’?” from his 2010 collection, We Don’t Know We Don’t Know (Graywolf Press), which incorporates numerous quotes from former secretary of defense Donald Rumsfeld, to an audience of writers curious about the implications of addressing social and governmental themes through verse. Part of the poet’s work, according to Lantz, is to make things up in order to find a more substantial truth, “to reclaim language from its political and rhetorical origins.” 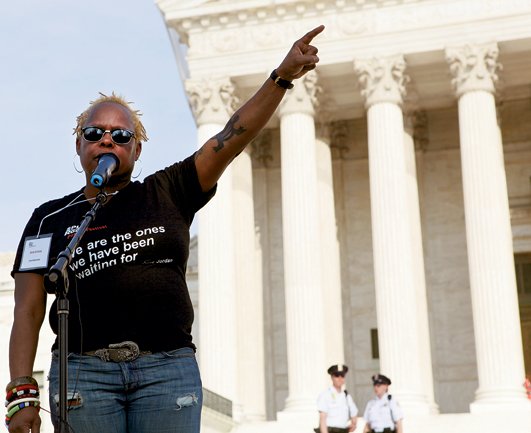 It is especially palpable during the heat of an election year—and in a period of national reflection that has witnessed the Occupy protests, the tenth anniversary of the September 11 attacks, and ongoing economic and political unrest spreading far beyond U.S. borders—that a literature concerned with today’s realities is gaining new prominence. “Seems to me that the American poetry establishment is finally starting to look and sound like the American people, and therefore to tell the varied stories of our time,” says Sarah Browning, director of the biennial Split This Rock Poetry Festival: Poems of Provocation and Witness, which was held March 22 to March 25 in Washington, D.C. “From my vantage point, we’re witnessing a true flowering of poetry of conscience by poets across the spectrum of demographics and poetic style.”

Split This Rock, which this year featured social-justice luminaries such as Martín Espada, Marilyn Nelson, Sonia Sanchez, and Alice Walker, presented over sixty workshops, panel discussions, and readings—including a poetry recitation outside the Supreme Court—under the theme “Poetry by and for the 99 Percent.” The sold-out festival, which hosted an unprecedented five hundred attendees, took over U Street haunts such as Busboys and Poets and the True Reformer Building to host discussions on topics including the literary community’s response to 9/11, Hurricane Katrina, and other disasters; the impact of youth poetry programs; and the Poets Against the War initiative started in 2003 by Copper Canyon Press cofounder Sam Hamill. At the center of the event was a tribute to the late poet June Jordan, who died ten years ago this June, with several programs exploring Jordan’s political activism and enduring approach to teaching. (The inclusive writing program Jordan founded at the University of California in Berkeley, Poetry for the People, celebrated its twentieth anniversary this past spring.)

The Poetry Society of America (PSA) is also turning its attention to matters political this year, with the national series Red, White, and Blue: Poets on Politics, which launched in March. Its fall programs will be held on September 27, October 2, and October 29 in Chicago, Houston, and Washington, D.C., respectively, in an effort to “recognize and understand the world of change we will all face this year, and consider the voices of poets and the place of poetry in the shifting tide.” Contributing voices include Nikky Finney, Brian Turner, and Elizabeth Alexander, the poet who read at Barack Obama’s 2008 inauguration, who will be featured in the culminating event at D.C.’s Folger Shakespeare Library. The PSA has also published on its website, www.poetrysociety.org, a series of Red, White, and Blue–related interviews with poets such as Rae Armantrout, Ron Silliman, and Matthew Zapruder.

This month in New York City a group of writers whose poetry of action has burgeoned over the past decade will celebrate its anniversary onstage. Poetic People Power (PPP), a performance project that explores a specific political theme each year through verse and spoken word, will present “Retro-Active: Ten Years of Poetic Action” on May 17 at Helen Mills Theater in Manhattan. Featuring founder Tara Bracco and several perennial members of her troupe (Erica R. DeLaRosa, Frantz Jerome, Angela Kariotis, Shetal Shah, Jonathan Walton, and Justin Woo), the program will “look back at [the poets’] artistic response to the changing political landscape over the past decade and offer new words about where our country is today.” For each annual performance, the poets generated new work around a theme, including “Women’s Words Against War” (inspired by Hamill’s Poets Against the War movement); “Voices on Voting and Democracy”; and “Price Check: How We Became a Culture of Consumption”; and presented it at iconic New York City literary venues such as Bluestockings bookstore, Bowery Poetry Club, and the Nuyorican Poets Cafe, as well as at colleges in New York State and at Amnesty International’s 2010 Human Rights Art Festival in Silver Spring, Maryland. Looking forward, Bracco plans to compile the work written for PPP in an anthology, offering the poets an opportunity to reach a broader audience. She also posts a list of resources on PPP’s website, www.poeticpeoplepower.com, under the heading Stay Active! to help further conversations started by the poets’ performances.

Split This Rock engaged in a similar exercise in outreach and endurance at the close of this year’s festival, with an open planning session focused on the creation of an interactive website, podcasts, and a resource library that would help grow the initiatives the festival promotes and strengthen the network of poets involved in such actions. After all, as the late June Jordan wrote, “We are the ones we have been waiting for.” And for many writers, the seeds of community progress and large-scale change cultivated by these events are sown first in solitude, on the page. As Harvey said on the “Political Poetry” panel at the AWP conference earlier this year, “Perhaps we write these poems not only to be challenged and be changed, but to be less alone.”

Rebecca Keith’s poems and essays have appeared in Best New Poets, the Laurel Review, the Rumpus, the Awl, BOMBlog, the Millions, and elsewhere.

Five years ago, as poets and readers attended the annual StAnza poetry festival, the war began in Iraq. This year’s festival, held from March 12 to March 16, acknowledged that anniversary explicitly with its two themes, “Poetry & Conflict”...

In response to the Israeli-Palestinian conflict, a group of authors recently organized a benefit reading at McNally Robinson Booksellers in New York City to be held on September 18. 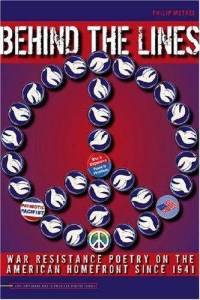 As a companion to "Poetic People Power" by Rebecca Keith, here's a look at classic and contemporary books that investigate social and political themes through poetry and prose. Help us add to this visual library by sending your suggestions to editor...
X