by Staff
News and Trends
November/December 2016

With so many good books being published every month, some literary titles worth exploring can get lost in the stacks. Below are the first lines of a dozen recently released books, including Zadie Smith’s Swing Time and Fanny Howe’s The Needle’s Eye, that offer a glimpse into the worlds of these new and noteworthy titles. 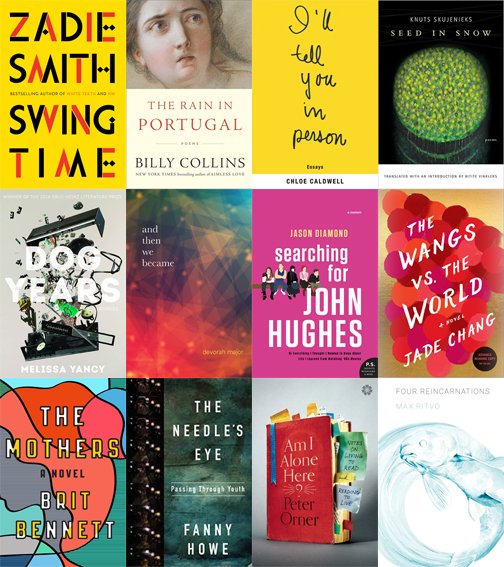 “In the old joke, / the marriage counselor / tells the couple who never talks anymore / to go to a jazz club because at a jazz club / everyone talks during the bass solo.” The Rain in Portugal (Random House, October 2016) by Billy Collins. Eleventh book, poetry collection. Agent: Chris Calhoun. Editor: Andrea Walker. Publicist: Barbara Fillon.

“What should I do with my life? my notebook from 2005 reads.” I’ll Tell You in Person (Emily Books, October 2016) by Chloe Caldwell. Third book, second essay collection. Agent: Chelsea Lindman. Editor: Emily Gould. Publicist: Alyson Sinclair.

“The Berger family is in a big-box store, one they have driven several miles out of their West L.A. neighborhood to find, and the cart is piled so high Ellen had finally conceded to getting another.” Dog Years (University of Pittsburgh Press, October 2016) by Melissa Yancy. First book, story collection. Agent: Kirby Kim. Editor: Ed Ochester. Publicist: Maria Sticco.

“we are the memory / of that place without measure / that filled all space / that never was and ever will be” and then we became (City Lights Publishers, November 2016) by devorah major. Seventh book, fifth poetry collection. Agent: None. Editor: Elaine Katzenberger. Publicist: Chris Carosi.

“I wasn’t paying attention to the people waiting in line for cupcakes; I was just looking up at a night sky dotted with flurries of snow bravely falling onto rooftops and parked cars.” Searching for John Hughes: Or Everything I Thought I Needed to Know About Life I Learned From Watching ’80s Movies (William Morrow, November 2016) by Jason Diamond. First book, memoir. Agent: William Callahan. Editor: Margaux Weisman. Publicist: Kelly Rudolph.

“Once upon a time in Uzbekistan there was a boy named Faroukh who had the soul of a poet.” The Needle’s Eye (Graywolf Press, November 2016) by Fanny Howe. Thirty-fourth book, third essay collection. Agent: None. Editor: Jeff Shotts. Publicist: Caroline Nitz.

“Alone in the garage with all these books.” Am I Alone Here? Notes on Living to Read and Reading to Live (Catapult, November 2016) by Peter Orner. Fifth book, first essay collection. Agent: Ellen Levine. Editor: Pat Strachan. Publicist: Alyson Sinclair.