by
Staff
News and Trends
March/April 2020

With so many good books being published every month, some literary titles worth exploring can get lost in the stacks. Page One offers the first lines of a dozen recently released books, Recollections of My Nonexistence by Rebecca Solnit and Minor Feelings: An Asian American Reckoning by Cathy Park Hong. 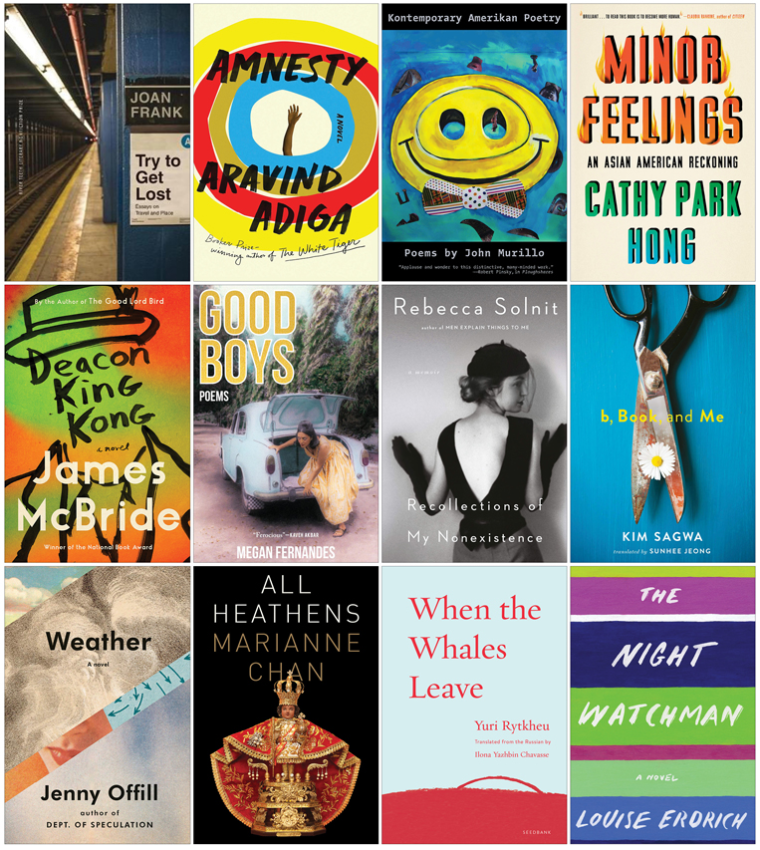 “A face as stiff as a boulder, stiff with boredom—that’s the face of an adult.” b, Book, and Me (Two Lines Press, February 2020) by Kim Sagwa, translated from the Korean by Sunhee Jeong. Third of eleven books, second of six novels. Agent: J. Jeong. Editor: CJ Evans. Publicist: Mandy Medley.

“One day long ago, I looked at myself as I faced a full-length mirror and saw my image darken and soften and then seem to retreat, as though I was vanishing from the world rather than that my mind was shutting it out.” Recollections of My Nonexistence (Viking, March 2020) by Rebecca Solnit. Twenty-third book, first memoir. Agent: Frances Coady. Editor: Paul Slovak. Publicists: Maya Baran and Sara Leonard.

“Sometimes I could see my parents / spiraling in the Americas, / in the opera rooms and dives, / in the bodega where the VCR / played Bollywood in Northeast Philly / near where my dad worked.” Good Boys (Tin House Books, February 2020) by Megan Fernandes. Second book, poetry collection. Agent: None. Editors: Matthew Dickman and Tony Perez. Publicist: Molly Templeton.

“The first thing I do these days, when planning travel, is to not want to go.” Try to Get Lost: Essays on Travel and Place (University of New Mexico Press, February 2020) by Joan Frank. Ninth book, second essay collection. Agent: None. Editor: Elise M. McHugh. Publicist: Adelia Humme.

“Not sleepwalking, but waking still, / with my hand on a gun, and the gun / in a mouth, and the mouth / on the face of a man on his knees.” Kontemporary Amerikan Poetry (Four Way Books, March 2020) by John Murillo. Second book, poetry collection. Agent: None. Editor: Martha Rhodes. Publicist: Clarissa Long.

“All of the coastline of the island of Sri Lanka is indented, mysterious, and beautiful—but no spot is more mysterious than Batticaloa.” Amnesty (Scribner, February 2020) by Aravind Adiga. Fifth book, novel. Agent: Karolina Sutton. Editor: Kathy Belden. Publicist: Katie Monaghan.

“Nau loved the sight of the bright, shimmering gusts as they sprang up suddenly over the sea; sparkling jets of water leaping high in the air, with the sun riffling through them, weaving in glittering rainbows.” When the Whales Leave (Milkweed Editions, March 2020) by Yuri Rytkheu, translated from the Russian by Ilona Yazhbin Chavasse. Sixth book translated into English, novel. Agent: None. Editor: Daniel Slager. Publicist: Joanna Demkiewicz.

Megan Fernandes reads “In Which I Become a Mythology and Also, Executed” and “While I Keep Making the Room Brighter” from her poetry collection Good Boys, published in February 2020 by Tin House Books.

Jenny Offill reads from her novel Weather, published in February 2020 by Knopf.

Joan Frank reads an excerpt from “The Where of It,” the prologue of Try to Get Lost: Essays on Travel and Place, published in February 2020 by University of New Mexico Press.

Marianne Chan reads “When We Lived in Germany” and “Love Song for Antonio Pigafetta” from her poetry collection, All Heathens, published in March 2020 by Sarabande Books.