by
Staff
News and Trends
January/February 2020

With so many good books being published every month, some literary titles worth exploring can get lost in the stacks. Page One offers the first lines of a dozen recently released books, including Cleanness by Garth Greenwell and Interior Chinatown by Charles Yu, for a glimpse into the worlds of these new and noteworthy titles. 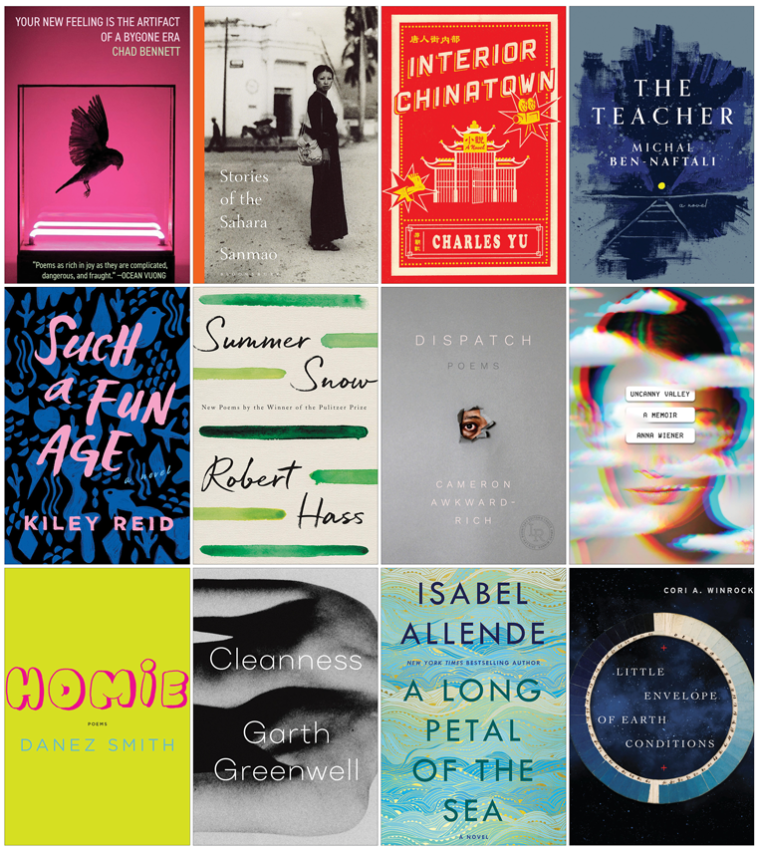 “Depending on whom you ask, it was either the apex, the inflection point, or the beginning of the end for Silicon Valley’s startup scene—what cynics called a bubble, optimists called the future, and my future coworkers, high on the fumes of world-historical potential, breathlessly called the ecosystem.” Uncanny Valley (MCD x FSG, January 2020) by Anna Wiener. First book, memoir. Agent: Chris Parris-Lamb. Editor: Emily Bell. Publicist: Sarita Varma.

“First, there was faith— / how a terrestrial // body pulled by the force of / attraction toward // earth’s molten center / nonetheless hung willing // from a fixed point.” Your New Feeling Is the Artifact of a Bygone Era (Sarabande Books, January 2020) by Chad Bennett. Second book, first poetry collection. Agent: None. Editor: Sarah Gorham. Publicist: Joanna Englert.

“In the dream he was a hawk with blood on its beak.” Summer Snow (Ecco, January 2020) by Robert Hass. Eleventh book, seventh poetry collection. Agent: None. Editor: Daniel Halpern. Publicist: Martin Wilson.

“When I first arrived in the desert, I desperately wanted to be the first female explorer to cross the Sahara.” Stories of the Sahara (Bloomsbury, January 2020) by Sanmao, translated from the Chinese by Mike Fu. First of twenty-four books, nonfiction. Agent: None. Editor: Morgan Jones. Publicist: Katie Boni.

“Whose foreheads should we kiss to check for fever, / whose memories are those that we keep // so close to our wrists.” Little Envelope of Earth Conditions (Alice James Books, January 2020) by Cori A. Winrock. Second book, poetry collection. Agent: None. Editor: Carey Salerno. Publicist: Alyson Sinclair.

“The young soldier was part of the ‘Baby Bottle Conscription,’ the boys called up when there were no more men, young or old, to fight the war.” A Long Petal of the Sea (Ballantine Books, January 2020) by Isabel Allende, translated from the Spanish by Nick Caistor and Amanda Hopkinson. Twenty-fourth book, twentieth novel. Agents: Johanna Castillo, Maribel Gutierrez, and Lluis Miguel Palomares. Editor: Jennifer Hershey. Publicists: Jennifer Garza and Mary Moates.

“So used to drought, the city looked astonished / at the sky & I have to believe that’s why // she didn’t see me in the crosswalk.” Dispatch (Persea Books, December 2019) by Cameron Awkward-Rich. Second book, poetry collection. Agent: None. Editor: Gabriel Fried. Publicist: Jonah Fried.

Chad Bennett reads “Trick” from his poetry collection Your New Feeling Is the Artifact of a Bygone Era, published in January 2020 by Sarabande Books.

Garth Greenwell reads from his novel-in-stories, Cleanness, published in January 2020 by Farrar, Straus and Giroux.

Cori A. Winrock reads “Love Poem in a Time of Ambulances” from her poetry collection Little Envelope of Earth Conditions, published in January 2020 by Alice James Books.

Cameron Awkward-Rich reads “Bad Weather,” “The Cure for What Ails You,” and “All My Friends Are Sad & Bright” from his poetry collection Dispatch, published in December by Persea Books.
X