by Staff
News and Trends
November/December 2019

With so many good books being published every month, some literary titles worth exploring can get lost in the stacks. Page One offers the first lines of a dozen recently released books, including Grand Union by Zadie Smith and Arias by Sharon Olds, for a glimpse into the worlds of these new and noteworthy titles. 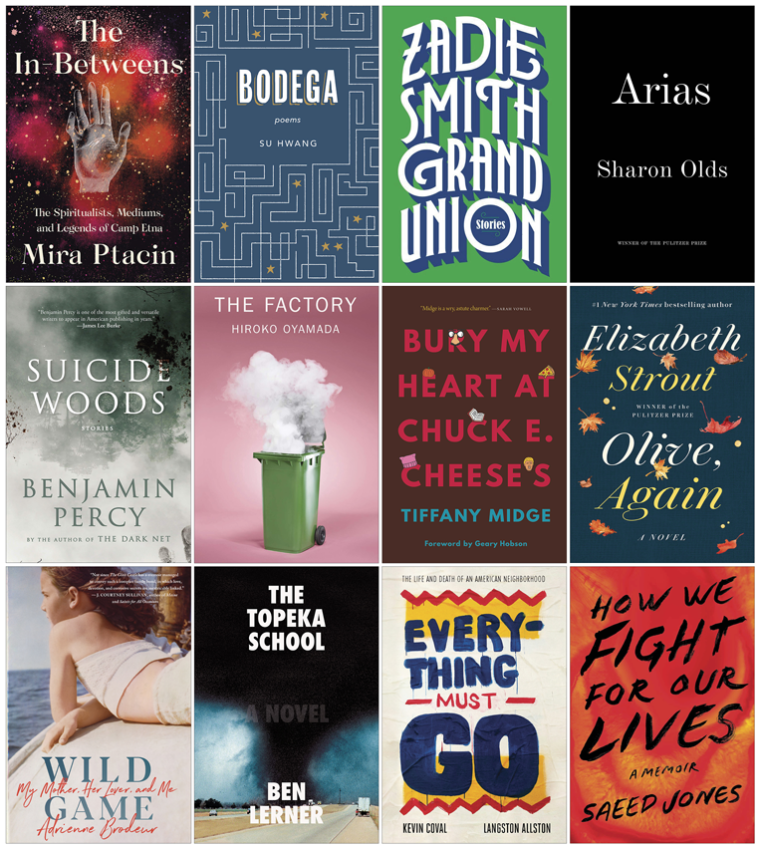 “In the morning, when I’m pouring the hot milk / into the coffee, I put the side of my / face near the convex pitcher, to watch / the last, round drop from the spout— / and it feels like being cheek to cheek / with a baby.” Arias (Knopf, October 2019) by Sharon Olds. Fifteenth book, poetry collection. Agent: Nicole Aragi. Editor: Deborah Garrison. Publicist: Josefine Kals.

“‘I would like to be on good terms with all animals,’ remarked the woman, to her daughter.” Grand Union (Penguin Press, October 2019) by Zadie Smith. Ninth book, first story collection. Agent: Georgia Garrett. Editor: Ann Godoff. Publicist: Juliana Kiyan.

“The waxy-faced weatherman on Channel 8 said we had been above 90 degrees for ten days in a row.” How We Fight for Our Lives (Simon & Schuster, October 2019) by Saeed Jones. Second book, first memoir. Agent: Charlotte Sheedy. Editor: Jonathan Cox. Publicist: Anne Pearce.

“they came / made a village / an alley to play in / a street to wander / a growing mass / new corners/comers / just off the boat/train / on the Ave.” Everything Must Go (Haymarket Books, October 2019) by Kevin Coval, illustrated by Langston Allston. Sixth book, poetry collection. Agent: None. Editor: Julie Fain. Publicist: Jim Plank.

“In the early afternoon on a Saturday in June, Jack Kennison put on his sunglasses, got into his sports car with the top down, strapped the seatbelt over his shoulder and across his large stomach, and drove to Portland—almost an hour away—to buy a gallon of whiskey rather than bump into Olive Kitteridge at the grocery store here in Crosby, Maine.” Olive, Again (Random House, October 2019) by Elizabeth Strout. Seventh book, novel. Agents: Lucy Carson and Molly Friedrich. Editor: Susan Kamil. Publicists: Maria Braeckel and Christine Johnston.

“The day of my mother’s funeral service, I separated myself from the rest of the grieving throng and hid out in the musician’s belfry like tortured Quasimodo, my grief too hideous to expose.” Bury My Heart at Chuck E. Cheese’s (Bison Books, October 2019) by Tiffany Midge. Third book, first memoir. Agent: None. Editor: Matt Bokovoy. Publicist: Anna Weir.

“When I guessed correctly that it was my brother, Julian, coming through, the licorice-colored coffee table rocked back and forth a couple of times before tipping, my knees catching the thing before it could fall to the ground.” The In-Betweens: The Spiritualists, Mediums, and Legends of Camp Etna (Liveright, October 2019) by Mira Ptacin. Second book, memoir. Agent: Lisa Bankoff. Editors: Katie Adams and Marie Pantojan. Publicist: Cordelia Calvert.

“The forest is hardwood, and the branches of the oaks and sycamores are bare except for the crows, hundreds of them, all huddled like little men in black jackets.” Suicide Woods (Graywolf Press, October 2019) by Benjamin Percy. Eighth book, third story collection. Agent: Katherine Fausset. Editor: Steve Woodward. Publicist: Caroline Nitz.

Sharon Olds reads “Meeting a Stranger” from her poetry collection Arias, published by Alfred A. Knopf in October.

Mira Ptacin reads from her memoir The In-Betweens: The Spiritualists, Mediums, and Legends of Camp Etna, published in October by Liveright.Chapter 3: Ghost Hunting 101Cautiously, Barbara led us up the darkened stairwell. Of...

Benjamin Percy reads an excerpt from “The Cold Boy” from his short story collection Suicide Woods, published in October by Graywolf Press.
X