by
Staff
News and Trends
November/December 2018

With so many good books being published every month, some literary titles worth exploring can get lost in the stacks. Page One offers the first lines of a dozen recently released books including including Natasha Trethewey’s Monument: Poems New and Selected and Alice Walker’s Taking the Arrow Out of the Heart. 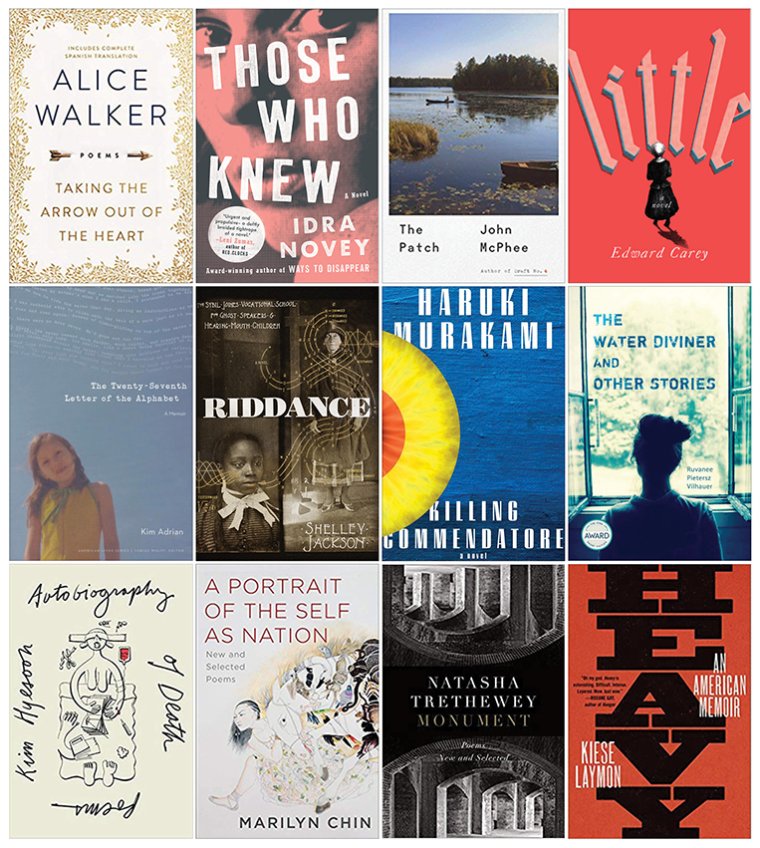 “Do not hang your head or clench your fists / when even your friend, after hearing the story, / says, My mother would never put up with that.” Monument: Poems New and Selected (Houghton Mifflin Harcourt, November 2018) by Natasha Trethewey. Sixth book, fifth poetry collection. Agent: Rob McQuilkin. Editor: Jenny Xu. Publicist: Michael Taeckens.

“One day as a child of eight or nine I went to school, sat down in my plastic chair, and proceeded to forget how to write.” The Twenty-Seventh Letter of the Alphabet (University of Nebraska Press, October 2018) by Kim Adrian. Second book, first memoir. Agent: None. Editor: Alicia Christensen. Publicist: Anna Weir.

“When I saw Suja waiting for me at the airport, I had reason to hope that Dr. Aronson had been right.” The Water Diviner and Other Stories (University of Iowa Press, October 2018) by Ruvanee Pietersz Vilhauer. First book, story collection. Agent: Shannon Hassan. Editor: James McCoy. Publicist: Allison Means.

“I am beginning to comprehend / the mystery / of the gift of suffering.” Taking the Arrow Out of the Heart (37 INK, October 2018) by Alice Walker, translated into Spanish by Manuel García Verdecia. Thirtieth book, tenth poetry collection. Agent: Joy Harris. Editor: Dawn Davis. Publicists: Yona Deshommes and Milena Brown.

“You move your canoe through open water a fly cast away from a patch of lily pads.” The Patch (Farrar, Straus and Giroux, November 2018) by John McPhee. Thirty-third book, seventh essay collection. Agent: None. Editor: Alex Star. Publicist: Stephen Weil.

“In the same year that the five-year-old Wolfgang Amadeus Mozart wrote his Minuet for Harpsichord, in the precise year when the British captured Pondicherry in India from the French, in the exact same year in which the melody for ‘Twinkle, Twinkle, Little Star’ was first published, in that very year, which is to say 1761, whilst in the city of Paris people at their salons told tales of beasts in castles and men with blue beards and beauties that would not wake and cats in boots and slippers made of glass and youngest children with tufts in their hair and daughters wrapped in donkey skin, and whilst in London people at their clubs discussed the coronation of King George III and Queen Charlotte: many miles away from all this activity, in a small village in Alsace, in the presence of a ruddy midwife, two village maids, and a terrified mother, was born a certain undersized baby.” Little (Riverhead Books, October 2018) by Edward Carey. Sixth book, novel. Agent: Isobel Dixon. Editor: Calvert Morgan. Publicists: Glory Anne Plata and Michael Taeckens.

“Precisely a week after the death of Maria P. was declared an accident, a woman reached into her tote bag and found a sweater inside that didn’t belong to her.” Those Who Knew (Viking, November 2018) by Idra Novey. Fourth book, second novel. Agent: PJ Mark. Editor: Laura Tisdel. Publicists: Olivia Taussig and Theresa Gaffney.