by
Staff
News and Trends
September/October 2018

With so many good books being published every month, some literary titles worth exploring can get lost in the stacks. Page One offers the first lines of a dozen recently released books including Lake Success by Gary Shteyngart and Essential Essays: Culture, Politics, and the Art of Poetry by the late Adrienne Rich. 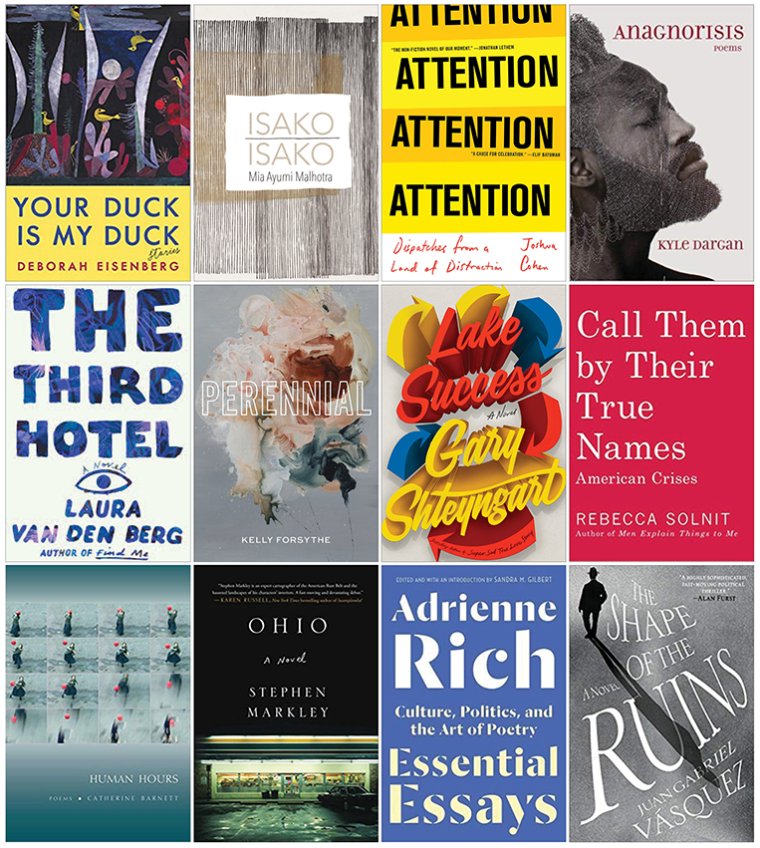 “One of the folktale archetypes, according to the Aarne–Thompson classification of these stories, tells of how ‘a mysterious or threatening helper is defeated when the hero or heroine discovers his name.’” Call Them by Their True Names: American Crises (and Essays) (Haymarket Books, September 2018) by Rebecca Solnit. Twentieth book, sixth essay collection. Agent: None. Editor: Caroline Luft. Publicist: Jim Plank.

“If anything distinguishes my generation of American writers, it’s that everyone in my generation became a writer, simply through the act of going online.” Attention: Dispatches From a Land of Distraction (Random House, August 2018) by Joshua Cohen. Eighth book, first essay collection. Agent: Edward Orloff. Editor: Sam Nicholson. Publicist: Isabella Biedenharn.

“Way back—oh, not all that long ago, actually, just a couple of years, but back before I’d gotten a glimpse of the gears and levers and pulleys that dredge the future up from the earth’s core to its surface—I was going to a lot of parties.” Your Duck Is My Duck (Ecco, September 2018) by Deborah Eisenberg. Seventh book, story collection. Agent: Lynn Nesbit. Editor: Daniel Halpern. Publicist: Martin Wilson.

“The last time I saw him, Carlos Carballo was climbing with difficulty into a police van, his hands cuffed behind has back and his head hunched down between his shoulders, while a news ticker running along the bottom of the screen reported the reason for his arrest: the attempted theft of the serge suit of an assassinated politician.” The Shape of the Ruins (Riverhead Books, September 2018) by Juan Gabriel Vásquez, translated from the Spanish by Anne McLean. Tenth book, seventh novel. Agent: María Lynch. Editor: Laura Perciasepe. Publicists: Jynne Dilling Martin and Glory Anne Plata.

“Ibsen’s When We Dead Awaken is a play about the use that the male artist and thinker—in the process of creating culture as we know it—has made of women, in his life and in his work; and about a woman’s slow struggling awakening to the use to which her life has been put.” Essential Essays: Culture, Politics, and the Art of Poetry (Norton, August 2018) by the late Adrienne Rich. Thirty-third book, eighth essay collection. Agent: Ellen Geiger. Editor: Jill Bialosky. Publicist: Rachel Salzman.