by
Staff
News and Trends
March/April 2018

With so many good books being published every month, some literary titles worth exploring can get lost in the stacks. Page One offers the first lines of a dozen recently released books, including Feel Free by Zadie Smith and I Am, I Am, I Am: Seventeen Brushes With Death by Maggie O’Farrell. 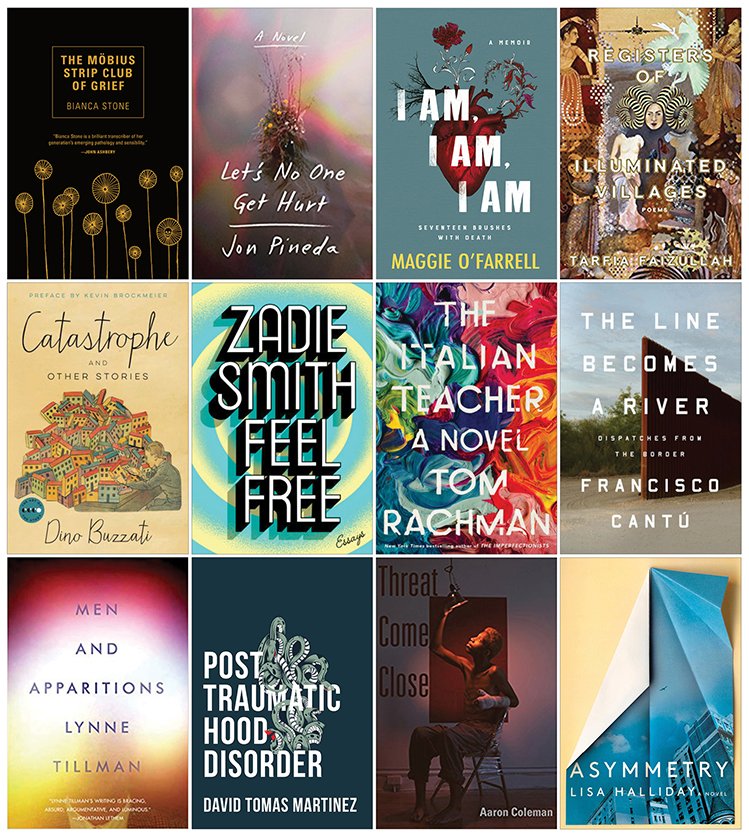 “I was having dinner with old friends in Rome when one of them turned to me and said: ‘But of course your writing so far has been a fifteen-year psychodrama.’” Feel Free (Penguin Press, February 2018) by Zadie Smith. Eighth book, second essay collection. Agent: Georgia Garrett. Editor: Ann Godoff. Publicist: Juliana Kiyan.

“Alice was beginning to get very tired of all this sitting by herself with nothing to do: every so often she tried again to read the book in her lap, but it was made up almost exclusively of long paragraphs, and no quotation marks whatsoever, and what is the point of a book, thought Alice, that does not have any quotation marks?” Asymmetry (Simon & Schuster, February 2018) by Lisa Halliday. First book, novel. Agent: Chris Parris-Lamb. Editor: Ira Silverberg. Publicist: Anne Tate Pearce.

“My mother and I drove east across the flatlands, along the vast floor of an ancient sea.” The Line Becomes a River: Dispatches From the Border (Riverhead Books, February 2018) by Francisco Cantú. First book, memoir. Agent: Rebecca Gradinger. Editor: Becky Saletan. Publicists: Jynne Dilling Martin and Glory Anne Plata.

“On the path ahead, stepping out from behind a boulder, a man appears.” I Am, I Am, I Am: Seventeen Brushes With Death (Knopf, February 2018) by Maggie O’Farrell. Eighth book, first memoir. Agent: Christy Fletcher. Editor: Jordan Pavlin. Publicist: Josefine Kals.

“I knew I had gotten older / when I noticed women no longer / wore bras, which // didn’t happen until my eyes / began slowly lightening with wrinkles, / though not in my eyes // was I old, / nor could I see myself as 40 / and still in college.” Post Traumatic Hood Disorder (Sarabande Books, March 2018) by David Tomas Martinez. Second book, poetry collection. Agent: None. Editor: Sarah Gorham. Publicist: Joanna Englert.

“In a week the inquiry into the collapse of the Baliverna begins.” Catastrophe (Ecco, March 2018) by the late Dino Buzzati, translated from the Italian by Judith Landry. Seventh story collection of more than twenty books. Agent: Maria Vittoria Albertini. Editor: Gabriella Doob. Publicist: James Faccinto.

“If I concentrate, I can see where the river should be.” Let’s No One Get Hurt (Farrar, Straus and Giroux, March 2018) by Jon Pineda. Sixth book, second novel. Agent: None. Editor: Emily Bell. Publicist: Steven Pfau.