by
Staff
News and Trends
November/December 2017

With so many good books being published every month, some literary titles worth exploring can get lost in the stacks. Page One offers the first lines of a dozen recently released books, including Louise Erdrich’s new novel, Future Home of the Living God, and Victoria Chang’s new poetry collection, Barbie Chang, for a glimpse into the worlds of these new and noteworthy titles. 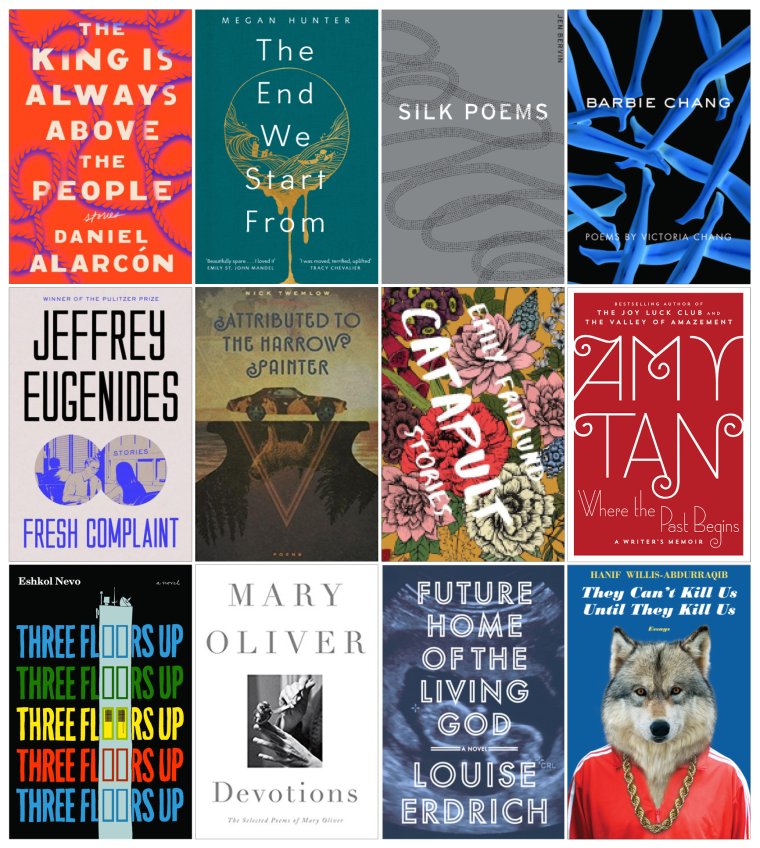 “When Marvin Gaye sang the National Anthem at the 1983 NBA All-Star Game, he knew he was going to die soon.” They Can’t Kill Us Until They Kill Us (Two Dollar Radio, November 2017) by Hanif Abdurraqib. Second book, first essay collection. Agent: None. Editor: Eric Obenauf. Publicist: Eric Obenauf.

“August 7. When I tell you that my white name is Cedar Hawk Songmaker and that I am the adopted child of Minneapolis liberals, and that when I went looking for my Ojibwe parents and found that I was born Mary Potts I hid the knowledge, maybe you’ll understand.” Future Home of the Living God (Harper, November 2017) by Louise Erdrich. Twenty-second book, sixteenth novel. Agent: Jin Auh. Editor: Terry Karten. Publicist: Jane Beirn.

“As we stood / In the unreflective / Pall of the canvas / Neatly pocked by broken / Plates, light / Swallowed by / The sickly sweet strokes / Of crap paint / Clumsily / Slapped across it, / I picked up Sacha / & asked him / If it might be / A bit much, / The painting’s title?” Attributed to the Harrow Painter (University of Iowa Press, November 2017) by Nick Twemlow. Second book, poetry collection. Agent: None. Editors: Mark Levine and Emily Wilson. Publicist: Allison Means.

“I am hours from giving birth, from the event I thought would never happen to me, and R has gone up a mountain.” The End We Start From (Grove Press, November 2017) by Megan Hunter. First book, novel. Agent: Emma Paterson. Editor: Elisabeth Schmitz. Publicists: Deb Seager and John Mark Boling.

“What I’m trying to tell you is that underneath the surprise, there was something else that Ayelet and I didn’t dare talk about, that in the back of our minds we knew—okay, I knew—that it could happen.” Three Floors Up (Other Press, October 2017) by Eshkol Nevo, translated from the Hebrew by Sondra Silverston. Seventh book, fifth novel. Agent: Markus Hoffmann. Editors: Judith Gurewich and Alexandra Poreda. Publicist: Maria Whelan.

“In my office is a time capsule: seven large clear plastic bins safeguarding frozen moments in time, a past that began before my birth.” Where the Past Begins: A Writer’s Memoir (Ecco, October 2017) by Amy Tan. Eighth book, second memoir. Agent: Sandra Dijkstra. Editor: Daniel Halpern. Publicist: Sonya Cheuse.

“There was no moon that first night, and we spent it as we spent our days: your fathers and your mothers have always worked with their hands.” The King Is Always Above the People (Riverhead Books, October 2017) by Daniel Alarcón. Fifth book, second story collection. Agent: Eric Simonoff. Editor: Laura Perciasepe. Publicist: Claire McGinnis.