by
Staff
News and Trends
March/April 2022

With so many good books being published every month, some literary titles worth exploring can get lost in the stacks. Page One offers the first lines of a dozen recently released books, including Pure Color by Sheila Heti and Dream of the Divided Field by Yanyi, for a glimpse into the worlds of these new and noteworthy titles. 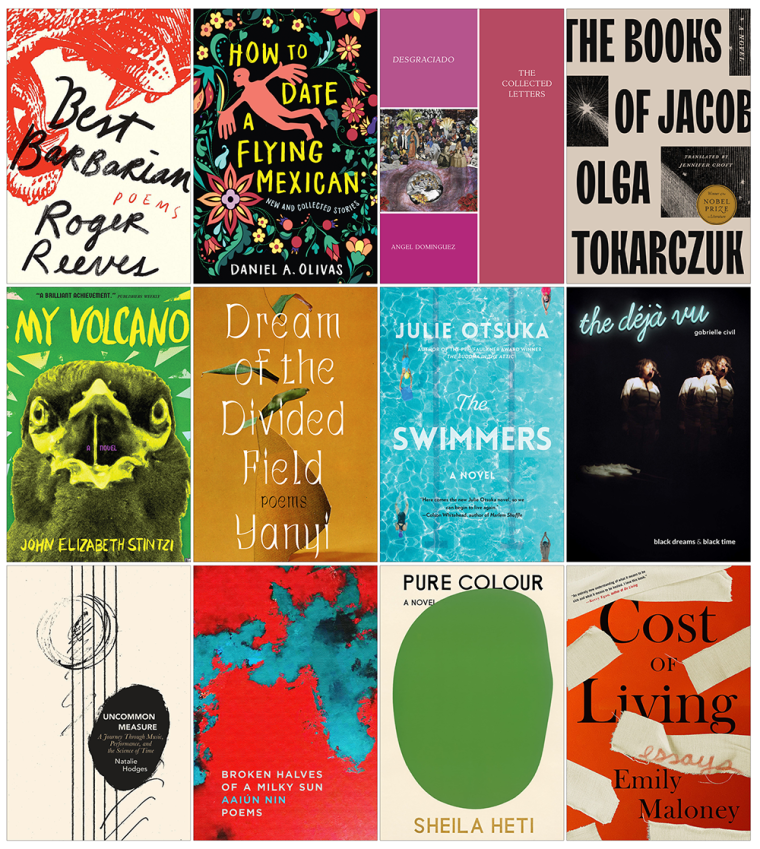 “After God created the heavens and the earth, he stood back to contemplate creation, like a painter standing back from the canvas.” Pure Colour (Farrar, Straus and Giroux, February 2022) by Sheila Heti. Fifth book, fourth novel. Agent: Jim Rutman. Editor: Mitzi Angel. Publicist: Sarita Varma.

“The jogger, the first person to see the peak of the volcano sprouting from the middle of the reservoir in Central Park, in the early hours of June 2, thought the volcano was a breaching humpback whale.” My Volcano (Two Dollar Radio, March 2022) by John Elizabeth Stintzi. Third book, second novel. Agent: Stephanie Sinclair. Editor: Eric Obenauf. Publicist: Eliza Jane Wood-Obenauf.

“All lions must lean into something other than a roar: / James Baldwin, for instance, singing Precious Lord, / His voice as weary as water broken over his scalp / In a storefront Sanctified Church’s baptismal pool / All those years ago when he wanted to be / Somebody’s child and on fire in that being.” Best Barbarian (Norton, March 2022) by Roger Reeves. Second book, poetry collection. Agent: None. Editor: Jill Bialosky. Publicist: Gina Savoy.

“If you want to change the past, all you have to do is try to record what happened in it.” Uncommon Measure: A Journey Through Music, Performance, and the Science of Time (Bellevue Literary Press, March 2022) by Natalie Hodges. First book, nonfiction. Agent: None. Editor: Erika Goldman. Publicist: Molly Mikolowski.

“Black skin in the forsaken outback / of the world / both concrete and jungle / in varying states of decomposition / and men in a corner / ordering girls to smile / stiff with rigor mortis / all bones no flesh” Broken Halves of a Milky Sun (Astra House, February 2022) by Aaiún Nin. First book, poetry collection. Agent: Szilvia Molnar. Editor: Alessandra Bastagli. Publicists: Rachael Small and Jeremy Wang-Iverson.

“After the second night Conchita witnessed Moisés flying in his backyard under the moonlight, and after the first night they shared her bed (which happened to be the second night she witnessed him flying in his backyard under the moonlight), she realized that no one, not even her sister Julieta, could learn of her new novio’s extraordinary talent.” How to Date a Flying Mexican: New and Collected Stories (University of Nevada Press, February 2022) by Daniel A. Olivas. Ninth book, fifth story collection. Agent: None. Editor: Margaret Dalrymple. Publicist: Caddie Dufurrena.

“Once swallowed, the piece of paper lodges in her esophagus, near her heart.” The Books of Jacob (Riverhead Books, February 2022) by Olga Tokarczuk, translated from the Polish by Jennifer Croft. Fourteenth of sixteen books, eighth novel. Agent: Laurence Laluyaux. Editor: Rebecca Saletan. Publicists: May-Zhee Lim and Claire McGinnis.

Yanyi reads “Faith,” “Aubade (In Names),” “Spring of Cups,” and “In the Museum” from his poetry collection Dream of the Divided Field, published in March 2022 by One World.

Sheila Heti reads from her novel Pure Colour, published in February 2022 by Farrar, Straus and Giroux.

John Elizabeth Stintzi reads from their novel My Volcano, published in March 2022 by Two Dollar Radio.

Julie Otsuka reads from her novel The Swimmers, published in February 2022 by Knopf.
X