by
Staff
News and Trends
September/October 2021

With so many good books being published every month, some literary titles worth exploring can get lost in the stacks. Page One offers the first lines of a dozen recently released books, including Cloud Cuckoo Land by Anthony Doerr and Harlem Shuffle by Colson Whitehead, for a glimpse into the worlds of these new and noteworthy titles. 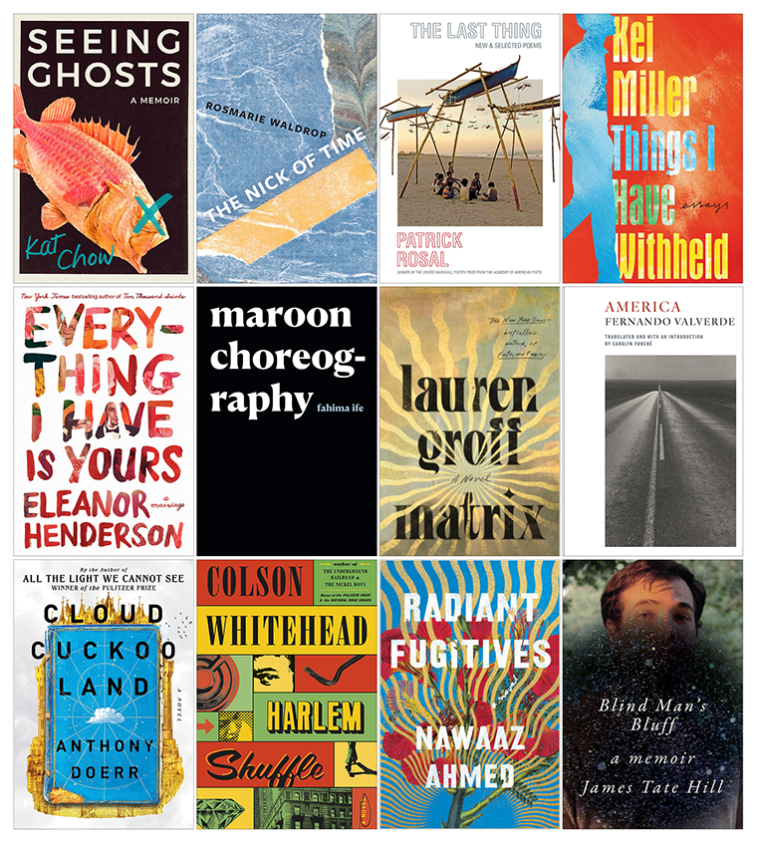 “Like many of the ghost stories I’ve grown up with, this one needs to start with a death.” Seeing Ghosts (Grand Central Publishing, August 2021) by Kat Chow. First book, memoir. Agent: Jin Auh. Editor: Maddie Caldwell. Publicists: Matthew Ballast and Ivy Cheng.

“There is no evidence that we have a special sense. Of time.” The Nick of Time (New Directions, September 2021) by Rosmarie Waldrop. Twenty-sixth book, twenty-first poetry collection. Agent: None. Editor: Jeffrey Yang. Publicist: Brittany Dennison.

“This is what comes to mind when I consider the silence: how I saved my words for the stairwell in Streatham Hill, London, right outside the flat where I lived at the time; how I would sit there many nights, a little shell-shocked, and mumbling to myself.” Things I Have Withheld (Grove Press, September 2021) by Kei Miller. Eleventh book, second essay collection. Agent: Alice Whitwham. Editor: Elisabeth Schmitz. Publicist: Kait Astrella.

“400,000 children killed to free the world, / the waters of the rivers were filled with blood, / the waters of the rivers of Europe with the blood of America / flowing through the Danube and the Seine, / dead fish and an unbreathable stench on the banks of the Rhine, / on the bridges of the Thames.” America (Copper Canyon Press, September 2021) by Fernando Valverde, translated from the Spanish by Carolyn Forché. Sixth book, poetry collection. Agent: None. Editor: Michael Wiegers. Publicist: Laura Buccieri.

“I am trying to get Aaron to sleep.” Everything I Have Is Yours: A Marriage (Flatiron Books, August 2021) by Eleanor Henderson. Third book, first memoir. Agent: Jim Rutman. Editor: Megan Lynch. Publicist: Chris Smith.

Rosmarie Waldrop reads “Wanting” and “Doing” from her poetry collection The Nick of Time, published in September 2021 by New Directions.

fahima ife reads “a matter more malleable than meaning,” “a night in which my spirit cowers,” and “shamanism” from their poetry collection, Maroon Choreography, published in August 2021 by Duke University Press.

Kei Miller reads from his essay collection Things I Have Withheld, published in September 2021 by Grove Press.

Eleanor Henderson reads from her memoir, Everything I Have Is Yours: A Marriage, published in August 2021 by Flatiron Books.