by
Staff
News and Trends
May/June 2021

With so many good books being published every month, some literary titles worth exploring can get lost in the stacks. Page One offers the first lines of a dozen recently released books, including The Glass Constellation: New and Collected Poems by Arthur Sze and Caul Baby by Morgan Jerkins, for a glimpse into the worlds of these new and noteworthy titles. 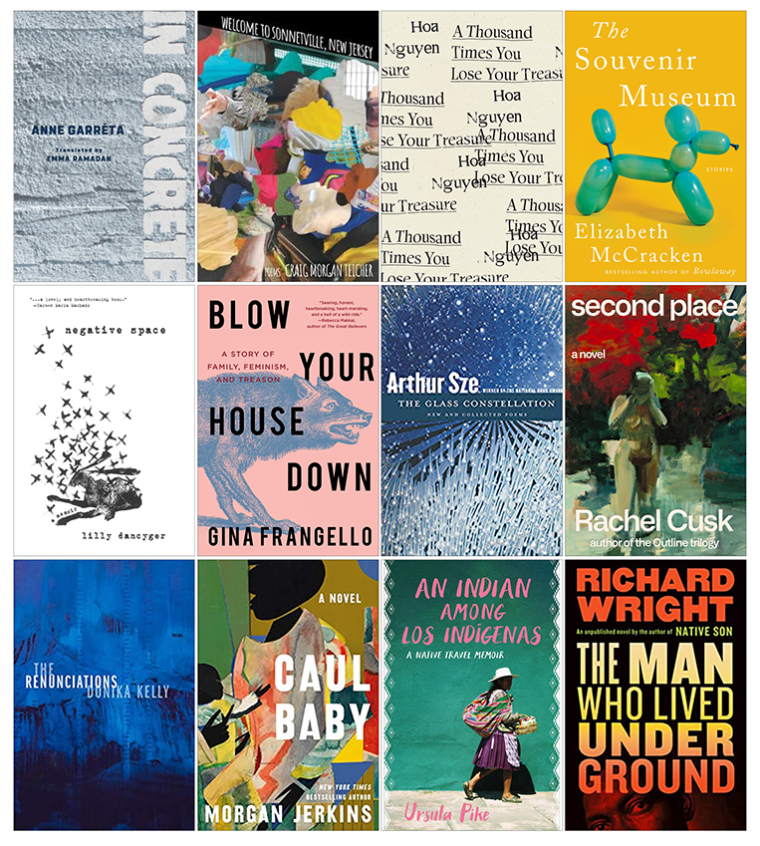 “I once told you, Jeffers, about the time I met the devil on a train leaving Paris, and about how after that meeting, the evil that usually lies undisturbed beneath the surface of things rose up and disgorged itself over every part of life.” Second Place (Farrar, Straus and Giroux, May 2021) by Rachel Cusk. Fifteenth book, eleventh novel. Agent: Sarah Chalfant. Editor: Mitzi Angel. Publicist: Lottchen Shivers.

“A is for Adulteress // But you knew that.” Blow Your House Down: A Story of Family, Feminism, and Treason (Counterpoint Press, April 2021) by Gina Frangello. Fifth book, first memoir. Agent: Alice Tasman. Editor: Dan Smetanka. Publicists: Megan Fishmann and Lena Moses-Schmitt.

“I gaze through a telescope at the Orion Nebula / a blue vapor with a cluster of white stars, / gaze at the globular cluster in Hercules, / needle and pinpoint lights stream into my eyes.” The Glass Constellation: New and Collected Poems (Copper Canyon Press, April 2021) by Arthur Sze. Eleventh book, poetry collection. Agent: None. Editor: Michael Wiegers. Publicist: Laura Buccieri.

“Something was bound to happen to Laila’s baby, and everyone from the pews of Abyssinian Baptist down to the northern shore of Central Park knew it.” Caul Baby (Harper, April 2021) by Morgan Jerkins. Third book, first novel. Agent: Monica Odom. Editor: Emily Griffin. Publicist: Hannah Bishop.

“Because Jack didn’t drive—not stick, not on the left side of the road, not at all ever—Sadie piloted the rental car from the Dublin airport to the wedding, grinding gears and scraping along the greenery and—for a few miles—creeping behind a tractor on a winding road.” The Souvenir Museum (Ecco, April 2021) by Elizabeth McCracken. Seventh book, third story collection. Agent: Henry Dunow. Editor: Helen Atsma. Publicist: Sonya Cheuse.

“I was born into a house of air, / my dad born to bear, to share, his burden.” The Renunciations (Graywolf Press, May 2021) by Donika Kelly. Second book, poetry collection. Agent: None. Editor: Jeff Shotts. Publicist: Caroline Nitz.

Gina Frangello reads from her memoir, Blow Your House Down: A Story of Family, Feminism, and Treason, published in April 2021 by Counterpoint Press.

Hoa Nguyen reads “Seeds and Crumbs” from her poetry collection A Thousand Times You Lose Your Treasure, published in April 2021 by Wave Books.

Lilly Dancyger reads from her memoir, Negative Space, published in May 2021 by Santa Fe Writers Project.

Arthur Sze reads “Pitch Blue,” “The Sleepers,” and “The White Orchard” from his poetry collection The Glass Constellation: New and Collected Poems, published in April 2021 by Copper Canyon Press.

Morgan Jerkins reads from her novel, Caul Baby, published in April 2021 by Harper.

Ursula Pike reads from her memoir, An Indian Among Los Indígenas: A Native Travel Memoir, published in April 2021 by Heyday.

Elizabeth McCracken reads from “Robinson Crusoe at the Waterpark” from her story collection The Souvenir Museum, published in April 2021 by Ecco.

Craig Morgan Teicher reads “I Am a Father Now” and “Drop Off” from his poetry collection Welcome to Sonnetville, New Jersey, published in April 2021 by BOA Editions.

Donika Kelly reads “In the Chapel of St. Mary’s,” “Portrait of My Father as a Winged Boar,” and “The moon rose over the bay. I had a lot of feelings.” from her poetry collection The Renunciations, published in May 2021 by Graywolf Press.
X