Amid the endless barrage of advertisements and byte-sized news that has come to define modern life, innovative independent publishers continue to find ways to thread literature into the social fabric. "Look for me under your boot-soles," wrote Walt Whitman, who was known to pass out pamphlets of his self-published Leaves of Grass and start conversations with everyday people—on the streets, in schools and shops. More than a century later, the impulse to bring literature into people's daily lives remains strong and has resulted in the rise of open-air publishing ventures like Baltimore Is Reads and Nashville Is Reads, which post poems in their respective cities' public places, and the more ambitious Broadsided, a monthly literature-and-art project that has gone global. 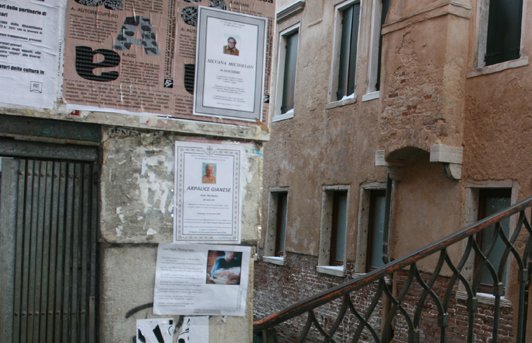 Founded in 2005 by Elizabeth Bradfield, a poet who lives in Cape Cod, Massachusetts, Broadsided brings together writers, visual artists, and anyone interested in "putting literature and art on the streets," as the project's slogan states. "Dana Gioia's essay ‘Can Poetry Matter?' has nagged me for years," says Bradfield, whose venture also welcomes prose. "Of course it can. I thought that perhaps if people ran into poetry on the streets, if poetry was paired with something eye catching...then maybe I could persuade them that literature and art can speak to them directly and viscerally."

Drawing from the rich history of the broadside, once a popular means of occasional publishing before the Civil War and later used as a political tool by writers of the Harlem Renaissance and the Beats, Broadsided has fashioned its own virtual grassroots approach to disseminating the word. The process begins with a small editorial team, including Bradfield, Gabrielle Calvocoressi, Sean Hill, and Mark Temelko, who select works to publish from e-mailed submissions of poetry and short prose. The group then invites artists to respond to accepted pieces with original artwork for the broadsides. On the first of every month, a new PDF of a broadside is posted on the project's Web site. The jump from page to public stage is ultimately facilitated by "vectors," interested folks who can download the PDFs and print and post them at will. Broadsides have been tacked on office doors, in waiting rooms, on airplanes, and even slipped, guerrilla style, between the pages of newspapers and magazines.

"What subversive fun to have poetry and art in a newspaper insert, when what you expect are ads for computer gear and cheap socks," says Bradfield. "What a joke on the persuasive wiles of advertisers to entice people to attend to language that isn't being used to get them to pull out their wallets or vote for something."

Vectors have already posted broadsides across five continents, in countries such as Chile, Japan, England, and Finland, as well as the Australian island of Tasmania. At home in the United States, Broadsided has appeared in urban centers including New York City and Washington, D.C., as well as small towns such as Healy, Alaska, whose population is fewer than a thousand. "Each month I post the new Broadsided on a community bulletin board in the post office lobby, and it's up there amongst all the other signs from rural life," says Healy vector Christine Byl. "I see people stopping to read it and know it might very well be the only poem they see all month. I love that."

Placing the broadsides at community gathering spots such as post offices and bus stops can help create a space for reflection amid routine, but Broadsided also sees an opportunity to ignite public dialogue about personal and political histories with the work it publishes. For instance, in the poem "War Rug," which was published by Broadsided last June, Chicago poet Francesco Levato explores the reality of living under a constant state of emergency, referencing the Department of Homeland Security's color-coded advisory system in juxtaposition with other common crisis shorthand. "Code Blue: no breathing / no heartbeat," he writes.

Looking for additional ways to situate itself within forums of sociocultural dialogue, Broadsided has turned to Twitter and Facebook, those popular catalysts for all varieties of discourse in the digital age, to achieve potential exposure. "What I love about Broadsided is that it really stands at the intersection of the public and private poem," says Calvocoressi, who serves as the project's Twitter editor and virtual vector-at-large. "The poems can, and ideally will, be placed everywhere and anywhere. That makes them part of the ongoing discourse of art and commerce, class and race, that runs through any place people dwell."

The broadsides have had something of a butterfly effect over the past five years. A poem posted in a bathroom stall at the University of Arizona, for example, sparked a discussion in Nairobi, Kenya, as vector Ellaraine Lockie found out. "I was in Nairobi attending the Summer Literary Seminar," she says, "and I read a poem that had been Broadsided a few months earlier. I noticed a flash of excitement on the face of a woman, a stranger to me. As soon as I finished reading she said, ‘I know that poem!'"

Writers can get involved by submitting poems and prose via e-mail (broadsided@gmail.com) or by becoming vectors in their own communities—participants are wanted especially in the yet-to-be-Broadsided states of Alabama, Delaware, Hawaii, Idaho, North Dakota, and Wyoming, as well as locales outside the United States. More information about the project, including writing guidelines, a vector map, and photos of the broadsides posted around the world, is available on broadsidedpress.org.

Adam Robinson started the outdoor journal Is Reads to offer the citizens of Baltimore an unusual venue for poetry—the city itself.