Literary translators are often credited for being wordsmiths, yet their roles can extend far beyond the page. Doubling as a type of talent scout, many translators are tuned in to international publishing scenes, where they’re on the lookout for exciting new non-English books to pitch to U.S. presses. This work as cross-cultural liaisons is the inspiration behind Translator Triptych, a new program from the University of Rochester’s Open Letter Books, which specializes in publishing translated texts from around the world. For each annual installment of the series, Open Letter will invite one translator to serve as triptych curator, selecting three non-English titles to translate and release through the press with the hope of highlighting and contextualizing the multifaceted process of translation. 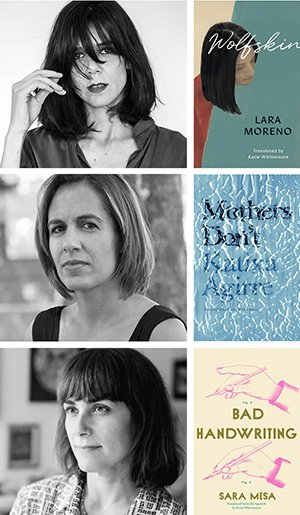 The first triptych will be published in July. Curated by Katie Whittemore, who currently resides in Valencia, Spain, it includes three volumes of Spanish fiction: two novels—Lara Moreno’s Wolfskin and Katixa Agirre’s Mothers Don’t—along with Sara Mesa’s story collection Bad Handwriting. Whittemore was already in the midst of translating Mothers Don’t and Bad Handwriting for Open Letter when she, publisher Chad W. Post, and Open Letter editorial director Kaija Straumanis began having conversations that led to the idea for the triptych. “I had long been thinking about…the writers and stories I was able to champion and how they were in conversation with each other and with other texts from other languages,” Whittemore says, adding that she hopes the series will “create an opportunity for other translators.”

Post says the series was designed to celebrate the important role that translators play at Open Letter, particularly in crafting the house’s list, and to call attention to their labor. While some presses bury translator credits, Translator Triptych will feature translators’ names on book covers, Post says, echoing a recent call for such recognition by translator Jennifer Croft and novelist Mark Haddon in a letter signed by more than 2,600 authors. The series also prioritizes remuneration: Translators will receive a $2,500 curation fee in addition to what Open Letter pays for the translations themselves—between ten and thirteen cents per word, according to Post. He also hopes Open Letter will make the notoriously opaque publishing process more transparent for translators by working more closely with them through the series.

“From a marketing perspective they’ll get to see what we do to launch a book, how we frame it, and be very intimately involved with crafting the materials that will go out to reviewers, booksellers, and readers,” Post says. The new curatorial fee is meant to support translators by affording them more “space and time to work on these larger, more involved marketing efforts,” he says.

Whittemore, for example, will participate in a reading tour and will discuss her triptych on Open Letter’s Three Percent podcast in July. She is also planning a series of articles that explore the connections among the books she chose for her triptych, including their shared interrogation of motherhood and their setting in contemporary Spain. What excites Whittemore about Open Letter’s project is the way it centers translators’ expertise, empowering them to “shape a book’s reception, how it is read alongside or in contrast to” the triptych’s other books, she says.

“A translator’s notes, interviews, articles, scholarship, panels, and readings all serve to help position a translated work for readers,” Whittemore says. “In this way, we might shape a reader’s experience similar to how a museum curator shapes a visitor’s experience of an exhibition of artworks.”

In addition to giving translators a promotional and financial boost, Translator Triptych is meant to expand Open Letter’s offerings as a publisher. Post hopes to acquire titles translated from languages not currently represented by the press and is particularly interested in publishing Arabic literature, he says. The series also allows Open Letter to strengthen its relationship with its existing roster of translators. The planned 2023 triptych will include three translations from the Korean by Janet Hong, one of which will be co-translated with Boram Kim. Straumanis will translate three Latvian titles for the 2024 triptych, according to Post. Both Hong and Straumanis have worked for Open Letter before: Hong translated two short story collections by Korean writer Ha Seong-nan, and Straumanis—Open Letter’s editorial director—translated a novel by Latvian writer Inga Abele. Such relationships with a press can be a boon to translators given the tenuous nature of the profession.

“Translators are the life-blood of both the literary world and the book trade which sustains it,” Croft and Haddon wrote in their open letter issued last September, on International Translators Day. “They should be properly recognised, celebrated, and rewarded for this.”

Translator Triptych offers one model of how publishers might begin to answer Croft and Haddon’s call.

Rachel Zarrow is a writer living in San Francisco. Her work has appeared in Catapult, Electric Literature, and the San Francisco Chronicle, among other outlets.

Giving Translators Their Due
by Rachel Zarrow | News and Trends 2.16.22

A growing movement asks that literary translators receive equitable compensation and acknowledgement, starting with the inclusion of translators’ names on book covers.

Endless Work: The Responsibilities and Pleasures of Translation
by Lily Meyer | The Literary Life 8.18.21

The author examines her personal relationship to the professional work of translation, forms of responsibility unique to the genre, and the complex notion of translation as a labor of love.

A research project called Prismatic Jane Eyre compares the many translations of Charlotte Brontë’s classic novel, studying the ways each reflects the culture in which it was created.

The Art of Translation: Many Englishes, Many Chineses
by Jeremy Tiang | The Literary Life 2.13.19

A translator examines the many shapes a language can take, and how cultural influence and interpretation can affect the translation process.