The Nothing That Is: A Profile of Matthew Sharpe

In 2004 novelist Susan Isaacs, who at the time had been invited to select the Today Show's book club pick, noticed a title next to the New York Times best-seller list. That's right, next to, on the recto page, in the And Bear in Mind column, she read a brief description of Matthew Sharpe's The Sleeping Father, published by Soft Skull Press. Although she knew nothing about the author or the publisher, she was intrigued by the title. "I thought to myself, 'For twenty, twenty-five bucks I can be a sport.'" 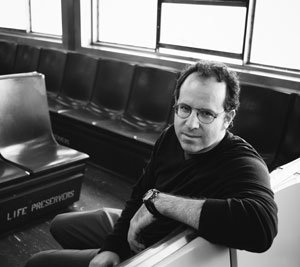 Once she began reading the novel, Isaacs—the author of eleven novels herself, most of them New York Times best-sellers—was hooked. Set in suburban Connecticut, The Sleeping Father follows Bernie Schwartz, a divorced father who accidentally mixes two types of antidepressants—causing first a coma and then brain damage—and his children Chris and Cathy, who decide to take on rehabilitating their father themselves. What made The Sleeping Father stand out for Isaacs was "the wonderfully effortless way" that Sharpe switches points of view among the characters. "But also the humanity of it," she says. "I just thought it was first-rate. And I didn't see why any big publisher didn't just grab it and push the hell out of it."

Isaacs chose The Sleeping Father for the Today Show's book club, and she and Sharpe appeared on national television with Katie Couric to announce the selection. But what made Sharpe's success truly astounding was the fact that The Sleeping Father had been rejected by twenty big publishing houses, including Villard—the publisher that had put out his first two books, Stories From the Tube (1998) and Nothing Is Terrible (2000). "No commercial publisher would have me," he says. Instead, the book was published by Brooklyn-based indie press Soft Skull.

The selection of The Sleeping Father for the Today Show's book club "more than quintupled sales," says Sharpe—the novel has sold twenty thousand copies, a significant figure for a literary title. It has been translated into nine other languages and was optioned by Warner Brothers for a film to be produced by Michael London, whose credits include The Family Stone, Sideways, and House of Sand and Fog.

It makes sense that Sharpe, of all writers, has become a poster boy of small press success. Like many indie publishers that find creative ways to promote their titles, Sharpe is an innovator. His books are highly imaginative works, at turns devastatingly poignant and equally hilarious. Propelled by classic human dilemmas, they are also decidedly of our time, written in lyrical prose that perfectly captures the voices of his varied, quirky characters.

Sharpe's new book, Jamestown, published this month by Soft Skull, falls right in rank with his work so far, although it's perhaps slightly more ambitious. The novel is a reimagining of the settling in 1607 of the first English colony in America—Jamestown—after a hundred or so Englishmen sponsored by the Virginia Company set sail from London. Once there, they endured battles with the Algonquian natives, illness, and starvation.

Sharpe's novel stays true to the major events that occurred between the colonists and the Algonquians, and its characters include historical figures Captain John Smith, colonist John Rolfe, Chief Powhatan, and one of history's most celebrated characters, Powhatan's daughter Pocahontas. The narrative shifts among the various characters' perspectives. Although not entirely epistolary, many of the chapters begin as letters the characters are writing, often to no one. The book begins, for example, in the voice of "Johnny" Rolfe: "To whoever is out there, if anyone is out there: Today has been an awful day in a run of awful days as long as life so far." While the letters lend the book a historical quality—like reading a first-person account from the past—this is not a historical novel. Sharpe's characters live in a postapocalyptic, environmentally devastated America. They set out in search of oil but become more interested in the Algonquian methods for purifying food and water.

It was Saturday morning and Matthew Sharpe was late, but for a good reason. The author of Jamestown was supposed to be signing copies of his book in the autographing room of BookExpo America (BEA), but he’d just been named a finalist for a...