Notes of a Native Son: Chronicle of a Collaboration

Notes of a Native Son, James Baldwin’s best-known book, was published in 1955 by Beacon Press. Baldwin’s editor then was Sol Stein, whom he’d known since high school. This essay is an excerpt from Stein’s Introduction to Native Sons by Baldwin and Stein, which will be published by One World, an imprint of Random House, next month. The book includes correspondence between Stein and Baldwin that produced Notes of a Native Son. 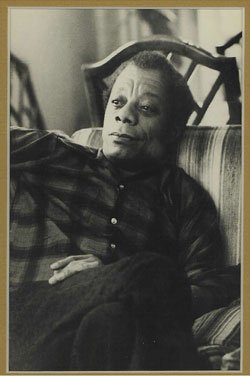 I am remembering five thousand people crowded into the Cathedral of St. John the Divine for James Baldwin’s funeral, and I imagine my lifelong friend Jimmy and me watching that event, an elbow poking the other’s rib for attention, as in the old days when our lives intersected.

I knew James Baldwin first in our early teenage years, when I was 13 and he was 15. It all began in the tower of DeWitt Clinton High School in the North Bronx at a time when students anywhere in the five boroughs of New York City didn’t need to be bused anywhere but could elect to go to a high school of their choice. Baldwin, known then and since as Jimmy, went the distance by subway, bus, and foot from Harlem, in Manhattan, to DeWitt Clinton, at the far northern edge of New York City, an exceptional school, where his last formal education took place. In this day of failed busing, it is hard to imagine that in 1939 a poor boy could travel many miles to a different borough to seize an education he could not get locally.

When DeWitt Clinton first opened the doors at its present site in May of 1929, it claimed to be the largest secondary school for boys in the world. The three-story building and its athletic field and stadium occupied about 26 acres, and had a single-session capacity of over five thousand students. A recently remodeled room just off its library displays a picture gallery of onetime Clinton students that includes such luminaries as Paddy Chayefsky, Countee Cullen, Burt Lancaster, Ralph Lauren, Jan Peerce, Richard Rodgers, A.M. Rosenthal, Daniel Schorr, Neil Simon, and Lionel Trilling. Clinton was a garden in which black and white teenagers could become fast friends, an environment that a few years later made possible Notes of a Native Son, which in 1999 was selected by a distinguished panel as one of “the 100 best nonfiction books of the century.”

Our home away from home was in what we called the Magpie Tower, the place where DeWitt Clinton’s award-winning literary magazine, the Magpie, was edited by students as young as 13 and 14. Our core group, besides Baldwin and me, included Richard Avedon and Emile Capouya, working under the tutelage of a faculty member, Wilmer Stone. Avedon was then a poet and shy. When we were called upon to sell the issue of January 1941, Avedon and I would stand in front of each classroom in succession, Avedon silent, his hands clasped in front of him, while I recited a poem of his from memory. America was not yet at war, but London was burning. Avedon’s poem that lingers still in my memory is about the loss of a childhood friend in the bombing of London. What we all wrote is today mostly embarrassing, but the learning process was remarkable. On Friday afternoons, after classes officially let out, the Magpie gang would assemble in the tower of the school building to hear our faculty adviser, Wilmer Stone, read our stories aloud to us in the most boring monotone imaginable. Painful, yes, but also instructive, for we learned then what all writers must eventually learn, that the reader has to be moved by the words alone, without help from the histrionic talents of their author.

Stone’s private critiques of our work could be withering. Avedon told me a couple of years ago that on one occasion Stone asked him what kind of reading matter his parents had lying around the house. Avedon mentioned some magazines like Good Housekeeping and McCall’s. Stone told him, “That’s what is wrong with your writing.” At that moment, Avedon said, he decided to give up writing and turned, brilliantly, to photography.

More than 40 years later, in the Preface to the 1984 edition of Notes of a Native Son, Baldwin begins, “It was Sol Stein, high school buddy, editor, novelist, playwright, who first suggested this book. My reaction was not enthusiastic: as I remember, I told him that I was too young to publish my memoirs. I had never thought of these essays as a possible book.... Sol’s suggestion had the startling and unkind effect of causing me to realize that time had passed. It was as though he had dashed cold water in my face. Sol persisted, however....”

I don’t remember Baldwin’s resistance to doing the book. I do remember the editorial process, helped by recently finding my line-by-line editorial notes and Baldwin’s responses. Writers can be wary of editors they don’t know well. By the time Baldwin and I had to deal with Notes of a Native Son, the overlay of a friendship of a dozen years made the process easier.

A friendship that endures might reasonably be defined as a house in which disagreements are confined to an attic that can be opened for memoirs but never for continuation of a former argument. Baldwin and I came to our friendship with differences. He was black and I was white, he loved men and I loved women, he assumed his ancestors came to America in chains and I assumed my parents, who slipped over the border separately and illegally, came here because they had nowhere else to go. Despite the differences—we lived many miles apart—because of our friendship, our families took a liking to each other. There are surviving photographs of Jimmy bouncing two of my pajama-clad children on his knee. I loved and admired Baldwin’s mother, Berdis, and believed it was reciprocal, even at our last warm meeting after Jimmy’s death. Berdis visited with my family when Jimmy was abroad. I was welcome in Berdis’s apartment on 131st Street in Harlem, but not by the policeman who stopped me outside and wanted to know what my white face was doing in that neighborhood.

Berdis had a secret that, to my knowledge and Jimmy’s say-so, was never divulged: the identity of Jimmy’s father. The now-legendary stepfather Jimmy wrote about was the preacher who married Berdis, presumably legitimized her son, and gave her eight more children. My mother, Zelda Zam, enjoyed Jimmy’s brightness, his dancing hands. Like Berdis Baldwin, she had her secret. According to family legend, in the old country, hiding in the cellar during a pogrom, through a crack in the door she saw her first fiancé killed by one of Petlyura’s Cossacks. In America she had another secret I discovered as a child during the Great Depression. In the old country, my mother at a young age was the head of secondary evening schools in Kiev, the largest city in the Ukraine. To make a living in America, she sold Compton’s Encyclopedia door to door, and one day, when the Depression bottomed, I opened the heavy sample case she took to work every day and found the knee pads she wore when cleaning other people’s floors. Baldwin’s mother may also have done the same.

Jimmy Baldwin and I, both Depression Era kids, responded differently to food. At my mother’s table, Jimmy would eat like a bird, one small piece at a time, taking two hours over a simple meal, while I devoured all of it in the first few minutes. One might suppose that Jimmy was stretching out the pleasure of food, while I was gulping it down before it vanished. One of my few memories of Depression eating was the time my mother and father planted the single orange my father had brought home on the table and said, “You eat. We’ll watch.”

Though both of my parents came from Russia, I had trouble identifying with my mother’s motherland, just as Jimmy later had trouble identifying with Africa. For better, not for worse, we were here, native Americans, charged up, yearning to make it as Americans while trying to shake up America to make it a more congenial nest for the likes of us. Before each of us was a lover of specific people, we were lovers of language, which, if delivered well, can have even more power than print. Franklin Roosevelt read Sam Rosenman’s words with a mesmerizing authority that helped lift the sagging spirits of Americans in a bad time. Churchill’s rhetoric, drafted by himself, defied Hitler and defeat. Martin Luther King, in his preacher’s delivery, announced his dream. Much has been made of Baldwin’s having been a teenage preacher, an influence that is evident in his incantatory prose and his ability to address readers as if they were his congregation. Not enough has been made of his early mastery of the writer’s main task, putting to paper what other people only think. He becomes, de facto, a whistle blower, a snitch, a fink, a rat, a teacher.