New Home for the Backwaters Press

For more than twenty years Greg Kosmicki and a tireless crew of volunteers shaped the Backwaters Press into a well-known haven for poets and writers in Nebraska and beyond. Under Kosmicki the nonprofit press won several Nebraska Book Awards and published 115 books by writers such as Lola Haskins, Denise Low, and former Nebraska State Poets William Kloefkorn and Twyla M. Hansen. So when Kosmicki decided last year to step back and focus on his own writing, he wanted to find a publisher to continue the press’s well-regarded work. Poet Kwame Dawes, editor of Prairie Schooner, suggested he talk to Donna Shear, the director of the University of Nebraska Press (UNP). When Kosmicki approached Shear, she didn’t hesitate: In March, UNP announced it had acquired the Backwaters Press as its newest imprint. “Our feeling was that it is something here in Nebraska, it has a good reputation and a lot of history, and we wanted to be able to continue that,” Shear says. 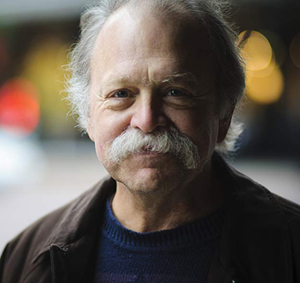 Kosmicki is happy with the decision, noting that it’s difficult for small presses, even those that are nonprofits, to keep going without a steady income stream and dedicated staff of volunteers. “We’re really excited about the legacy of the Backwaters Press continuing on,” he says. “People throughout the United States have known about the press for years, so we’re happy to hook up with UNP to keep it going.”

Those familiar with the Backwaters Press won’t see a lot of changes. The logo remains, as does the popular annual Backwaters Prize in Poetry and the emphasis on publishing quality poetry and prose from the region and beyond. Shear says members of the staff at UNP are currently evaluating the backlist, and some books likely will be made available in electronic format. In November the press will release its first Backwaters title, John Sibley Williams’s poetry collection Skin Memory, winner of the most recent Backwaters Prize in Poetry.

The acquisition of the Backwaters Press is just one of several new ventures for UNP, which publishes about 150 scholarly titles and trade books every year. In March the press started to distribute books by History Nebraska, formerly known as the Nebraska State Historical Society. And in the fall the journals division at UNP partnered with North Dakota Quarterly, a literary and public humanities journal, to expand its regional reach. These recent partnerships reflect UNP’s commitment to telling the stories of the Great Plains, a region sometimes overlooked by large commercial publishers, and carrying on the work of literary organizations and small presses that struggle to stay in business. “We felt a commitment to keeping the Backwaters Press right here in the state,” Shear says.

Rachael Hanel is the author of We’ll Be the Last Ones to Let You Down: Memoir of a Gravedigger’s Daughter (University of Minnesota Press, 2013).

Based at the University of Nebraska in Lincoln and led by Kwame Dawes, the African Poetry Book Fund supports and celebrates pan-African poetry.

Writing a Life One Moment at a Time
by Timothy Schaffert | News and Trends 3.1.03

Careful storytelling, along with careful marketing, has helped American Lives—the memoir series at the University of Nebraska Press—attract the attention of talented authors, national reviewers, and bookstore sales reps.

Let’s Just Do This: Eleven Small-Press Authors and Their Publishing Partners
by Kevin Larimer | Special Section 10.15.14

Eleven small-press authors and their publishing partners discuss the independent approach—and all the passion, commitment, and love that comes with it—to bringing books into the world.