Memoir: Whose Life Is It Anyway?

Appearing in someone else’s memoir is like appearing in someone else’s dream. Your role is scripted according to the vagaries of the author’s memory and subjected to the Rorschach test of the heart. This utter lack of editorial control is the second thought I have on learning, in the pages of the New York Times Book Review, that the son of my late ex-husband has published a memoir of his father, the poet William Matthews, and, by extension, the poet’s family, friends, wives, and lovers. My first thought is, “Why hadn’t I been given a heads-up or even an advance copy of the book?” 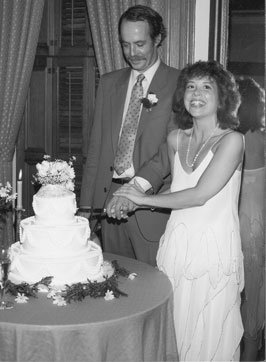 Sebastian Matthews, whose memoir In My Father’s Footsteps, was published by Norton in January, was already on his way to Pitzer College in Claremont, California, when his father and I met. Sebastian and I developed an affable, easy relationship, but saw each other infrequently. Still, we’ve kept somewhat in touch over the years. Last fall, Sebastian and his wife sent my family an adoption announcement; I responded with a gift; they, in turn, responded with thanks. Why not a by the way...? Of course, writing a memoir is emotionally taxing. I admire the courage it must have taken to sift through a childhood of memories. Anticipating a reader’s response—especially if that reader knew your subject intimately—would only add to the stress. But my empathy for the author quickly recedes as my thoughts turn to one thing only: me.

“Maybe I’m not even in the book,” I think. But the review distinctly mentions Bill’s “three official marriages and two unofficial ones.” I was official wife number two.

I want a copy of this book—now. But I’m in the wilds of New Jersey and the bookstores here, filled with titles by John Grisham and James Patterson, won’t stock this literary tome. So it’s Jeff Bezos to the rescue. It takes three days—three long days—for my copy to be delivered from Amazon.com. When it comes, I extract the book from its Jiffy bag and turn to the back, only to realize that, unlike biographies, memoirs don’t have indexes. By the time I’ve thumbed through the pages and located myself chronologically, I’ve definitely decided that: a) I don’t care how I’m portrayed; b) sure I do; c) no I don’t.

But the truth is that in the four pages (only four!) in which our four-year marriage is distilled, the author has nothing but kind words. Some facts in the book are wrong, however. I wasn’t “an editor at Villard,” as the author wrote, but publicity director. And Bill and I most certainly didn’t “connect through humor and a mutual love of cooking.” I had to be dragged to the kitchen. But wait: If these “facts” are unreliable, what should I make of the writer’s seemingly good opinion of me?

Thankfully, I’m torn from solipsism when my 10-year-old son comes home from school demanding cocoa. Had he not so innocently reminded me of what was really at issue, I might still be rereading those four pages. But suddenly I understand that my walk-on role in a slice of this book, though physically smack dead in its center, is hardly at its core. This is the story of a child and a parent—a father who, in the author’s words, “kept trying to make a home but never could keep from having one foot out the door.”

I read the memoir pretty much straight through. It is guileless and brutally honest, filled with pain, rebuke, and tribute. I learn much. By the time I knew the Matthews’s father-son dyad, it had relaxed into a comfortable yet occasionally wary meeting of men. The emotional turbulence and fierce ambivalence that marked Sebastian’s boyhood had receded. Neither Bill nor Sebastian ever alluded, understandably, to the days when the son, left home alone, filled the dinnerless dinner hour by creating a makeshift altar, carefully arranging a grouping of paternal talismans—an ashtray, a desk doodad, a Bob Marley album, an empty wine bottle—and surrounding it with candles.

Of course, for this reader, the entire memoir is filled with subtext. I’m intrigued by one of the book’s implicitly asked but unanswered questions: Why would five women who should have known better pretend not to know that their partner “somehow always remained a bachelor”? I’m carried back more than 15 years to a thick stack of letters that delineated my relationship with my late ex-husband, from the week we met to the day we divided up our furniture. The son writes that he was reluctant to delve into his father’s marriages for fear of invading privacy. But I’d have let him read these letters if only he’d asked. To talk about it all might have proved as cathartic for me as writing was, I hope, for Sebastian.

Still, even if we’d shared our memories, theories, and questions, our responses to them would have no doubt differed; each of us views the “truth” through the prism of our own regrets, desires, and defenses. Besides, our ties to the memoir’s subject are different. Spouses can divorce and lovers can leave, but sons are forever bound to their fathers. They must find a way to deal with their legacy, even if it’s not the elusive “happy childhood” longingly aspired to in William Matthews’s poetry. Fortunately, this child found his way.

Sebastian’s father, capable of original and unoriginal sins, was brimming with unspoken confessions, full of beans waiting to be spilled. What he couldn’t do, his memoirist did for him. I know he’d be pleased. As for me, I now have a few more certainties and a few more ambiguities to reckon with. I do know that in spite of—and because of—everything, Bill Matthews still leaps to my mind when I’m asked one of those questions about what person, living or dead, I’d most like to invite to a dinner party. He’s a man worthy of a memoir, all right. Or, who knows, perhaps two.

Arlene Modica Matthews teaches psychology at Brookdale Community College in Lincroft, New Jersey, and is the author of numerous popular psychology and humor books. Her forthcoming (so far imaginary) memoir is titled A Wife of the Poet.

My Father's Garden: Tending a Literary Legacy
by Sebastian Matthews | The Literary Life 3.1.04

Only weeks before he turned 55, my father, the poet William Matthews, delivered a manuscript of poems to Peter Davison, his longtime friend and editor at Houghton Mifflin. It turned out to be the last book he wrote. He died of a heart attack on...

The Perils of Writing Close to Home: Truth vs. Fiction
by Ginger Strand | The Literary Life 9.1.05

At no time on my book tour did I jump up and down, wave my fists, and scream, “It’s a novel! That means fiction!” At least I don’t think I did. It’s hard to be sure, because, in my head, I had that tantrum about three times daily...