In our Craft Capsules series, authors reveal the personal and particular ways they approach the art of writing. This is no. 135. 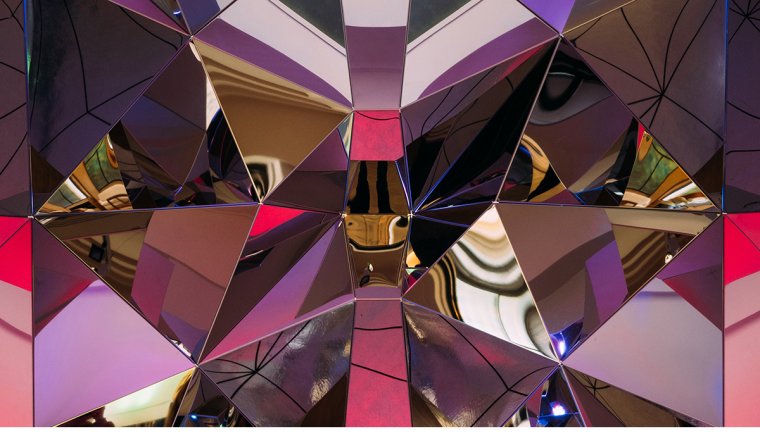 If you are convinced that a creative project isn’t working AND WILL NEVER WORK, you have been set free to do anything at all to it. I learned this when I was actively working as a visual artist. One day I took a fiber portrait I couldn’t fix and—deep breath—I cut it up. It was shocking—and freeing. I rearranged those cut pieces and introduced other fabrics. No longer tied to the palette I’d been using, I was able to incorporate new colors and patterns and see what they’d do. In one instance, the eye of the face I had cut up turned into shapes. It was exciting—a fresh, unexpected composition. From that moment, I never went back to an organized, directed way of creating again. That earlier approach seemed too stagnant, too perfect.

The cut-up method I’d used as a visual artist often informs my writing. To create my poem, “A Partial List of Here and Far,” for example, I pulled apart drafts of two poems that weren’t satisfying to me. I saved the best parts of each and pushed them together to see what they could do when they interacted. As with the fiber portrait, I added new elements—thoughts, lines, and phrases, in the case of the poem—building surprise and complexity into the text.

Let's look a little more closely: I selected the line “we evaluate our mortgage” from one draft poem; it was not particularly interesting. I thought about losing it, but decided to add in some new material, which would shift its meaning. I like to take something so darn normal, like paying bills, and spin it into strangeness. That’s how I ended up with the lines, “We evaluate our mortgage / to see what we owe / on the trees.” From another draft poem, I gathered the line about the man stirring “a pot and the town below tips sideways.” Such a fascinating image—I didn't want to lose that! Put close together, the two lines start to tell a far bigger and more mystifying story than either did alone.

One way you might achieve a similar effect in your own poetry is through the cut-up method I’ve described. If you have a few less-than-wonderful drafts, try splicing them together. In a way, it’s like braiding hair: You pull a line from here and a line from there, weaving them together until you have created a more complex structure than what you had to begin with. If your original two drafts are on the same subject, they may fit organically together to form a new poem. But it’s especially interesting if the original poems are very different from each other. You’ll likely have to weave in new thoughts too. For those of you who keep a file of evocative fragments, as I recommended in my first craft capsule, that file would be a good source to consult for a project like this.

It has always been important to me to capture ideas, sights, and sounds in my poetry in unexpected ways. I want to shake loose anything that feels too familiar, to confuse—just slightly—what I know and expect.

Lauren Camp is the author of five poetry collections, including Took House (Tupelo Press, 2020), which received the American Fiction Award in Poetry, and One Hundred Hungers (Tupelo Press, 2016), which won the Dorset Prize and was a finalist for the Arab American Book Award, the Housatonic Book Award, and the Sheila Margaret Motton Prize.

Setting the Table for Your Reader
by Trevor Ketner | Craft Capsules 6.27.22

The author of [WHITE] explores the benefits of writing to a specific audience and the risks of trying to meet the market’s imagined demands.

Revise Like a Painter
by Trevor Ketner | Craft Capsules 6.20.22

The author of [WHITE] considers how writers might take inspiration from visual artists in their approach to revision, pushing beyond surface editing to “see” their work afresh.

Freedom From Genre as Freedom to Write
by Trevor Ketner | Craft Capsules 6.13.22

The author of [WHITE] explores how writing outside one’s primary genre can lead to literary breakthroughs.