Locked in the Sweetshop: Seven Questions for Neil Gaiman

Of course there’s a secret phone room in the sprawling house in Cambridge, Massachusetts, that best-selling author Neil Gaiman rents with his wife, the musician Amanda Palmer. It’s easy to imagine the author communicating with the characters in his books in a room—very small, more like a closet, its walls covered in old New Yorker covers—not immediately visible to the casual visitor. But then, it’s easy to imagine anything when it comes to Neil Gaiman: He’s a writer who’s had an indelible impact on the minds of readers both young and old. 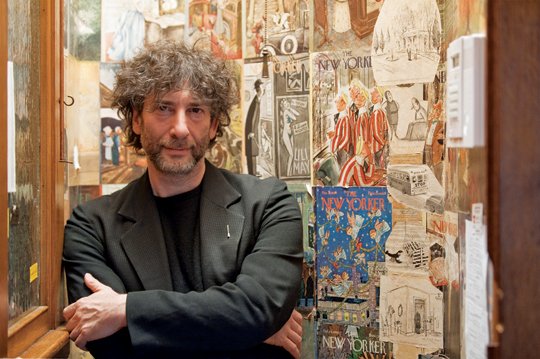 One of the world’s most beloved storytellers, Gaiman, whose new novel, The Ocean at the End of the Lane, was published in June by William Morrow, is the author of the acclaimed novels Anansi Boys (William Morrow, 2005), American Gods (William Morrow, 2001), Neverwhere (Avon Books, 1997), and, with Terry Pratchett, Good Omens: The Nice and Accurate Prophecies of Agnes Nutter, Witch (Workman Publishing, 1990). He is also well known as the creator of the Sandman series of graphic novels and the author of the story collections Fragile Things: Short Fictions and Wonders (William Morrow, 2006) and Smoke and Mirrors: Short Fictions and Illusions (William Morrow, 1998) as well as a number of children’s books, including Fortunately, the Milk, forthcoming in September, The Graveyard Book (2008), and Coraline (2002), all published by HarperCollins. He is the winner of numerous literary honors, including the Hugo, Bram Stoker, and World Fantasy Awards, and the Newbery Medal.

Gaiman is also a writer who is described by those who work closely with him as intensely devoted. Jennifer Brehl, his adult fiction editor at HarperCollins since 2002, says Gaiman’s readers are his top priority. His agent, Merrilee Heifetz, says he’s “extremely loyal,” and she should know: Not only has he stuck with the same publisher, HarperCollins, since 1996, when The Sandman: Book of Dreams, edited by Gaiman and Edward Kramer, was released, but she has been his agent for the past twenty-six years.

“Neil Gaiman is one of the most influential writers of our time not only because of his writing but also because of his relationship with his readers,” says Rosemary Brosnan, his children’s books editor at HarperCollins. Gaiman, who turns fifty-three in November, has built an impressive fan base over the past three decades in part through his use of social media. He’s approaching two million followers on Twitter, and he interacts with those who follow him on a regular basis.

The Ocean at the End of the Lane is the story of a seven-year-old boy whose world is changed after a lodger at his house in Sussex, England, kills himself. Through the eyes of the boy the world is not as it seems and, true to Gaiman’s typical brand of storytelling, magic lies at the center of the tale. The boy becomes entwined with the Hempstocks, a strange family composed of three women who have lived in the house at the end of the lane for a very, very long time. It’s a book about memory that gives the reader a powerful glimpse into the inner life of a child, even though the author says it isn’t geared toward children. Gaiman describes the main character as “me-ish.”

“It is his most mature book,” says Brehl, “and it is also, perhaps, his most melancholy, pensive book.”

Heifetz agrees. “It has the universal touchstone of reference to something ancient combined with the brilliant prose of his previous work—but with a maturity and nuance he hasn’t achieved before.”

“In everything he writes you feel the world open up into something infinite,” Heifetz adds. “Something beyond the basic story at hand.” I spoke with Gaiman at his house in Cambridge (he also owns a home in Wisconsin and on the Isle of Skye in Scotland) to see if I could uncover something beyond the basic story of this celebrated author. In person, just as in his books, Neil Gaiman does not disappoint.

What made you decide to feature a child protagonist in a book for adults?
I guess it’s fair to say that when I started [The Ocean at the End of the Lane] I didn’t know what it was or whom it was for. When I started it, I was writing a short story. At short story length you don’t really have to worry that much about the potential audience…. I remember reading it to my agent—reading what there was of it, maybe the first three chapters—and saying, “Well, look, this is what I’ve got. I’m not even sure what it is yet. I think it might be a kids’ story, but I don’t want it to be that, I want it to be about an adult.” And she said, “Well just write it, and don’t worry.”

Probably three-quarters of the way through writing it I gave a speech—the Zena Sutherland Lecture in Chicago. And my speech was called “What the @#$%&*! Is a Children’s Book, Anyway?” I started out by telling the story of how I was nearly thrown out of school. I was very close to being expelled when I was eight, for telling another kid a joke that had the word fuck in it. And the only reason that I wasn’t actually expelled is because the other kid’s parents, shocked, took him out of that school. And the school, which was fairly small, was not prepared to lose two sets of school fees.

As I was writing the speech and I was working on the book I was starting to think more about what makes something a children’s book and what doesn’t. And eventually, the conclusion I came to was that Ocean probably isn’t a children’s book, for reasons that have much more to do with how much hope I offer than anything else. You know, people grumble that Coraline is too scary for kids, but I don’t think it is. But I also know that fundamentally Coraline is a book about being brave and about coping with adversity.

We’re also talking about a book in which you have that Maurice Sendak quote at the beginning. [“I remember my own childhood vividly…I knew terrible things. But I knew I mustn’t let adults know I knew. It would scare them.”] I also mean that. It’s not there ironically; it’s not there as a clever commentary. It’s the idea that kids really do know things that would terrify adults. I think it’s only a certain amount of amnesia that allows adults to function. Somebody wrote me an e-mail the other day, a really sweet e-mail, asking, “Why don’t you write children’s books in which children need to be protected and coddled from reality.” And I’m going, “Well, don’t you understand how sensitive and easily broken kids are? Were you never one of them?” The cruelty that kids can inflict on other kids is astonishing and heartless and ill thought out and occasionally brilliantly thought out. The narrator in The Ocean at the End of the Lane is, from my perspective, at least when I was writing it, just living in the world of kids. He doesn’t have an awful lot of power, he doesn’t actually understand the rules of the adult world, and in this case he doesn’t really even understand the rules of the fairy-tale stuff that he’s in, either. He’s just trying to cope as best as he possibly can.