During those forlorn eveningslast autumn when the airwaves were devoid of professional basketball—thanks to a labor dispute between billionaire owners and millionaire players that was resolved by the end of the year—some radically offbeat, spectacularly less athletic basketball action took place on a court in northern Idaho. On November 15 author Sherman Alexie, winner of the other NBA (the National Book Award), teamed up with novelist Jess Walter, a National Book Award finalist, to fill the b-ball void and prove that poets and writers got game. Or at least show that authors can partake in some rim-rattling smack talk as they puff up and down a regulation court in a five-on-five game. 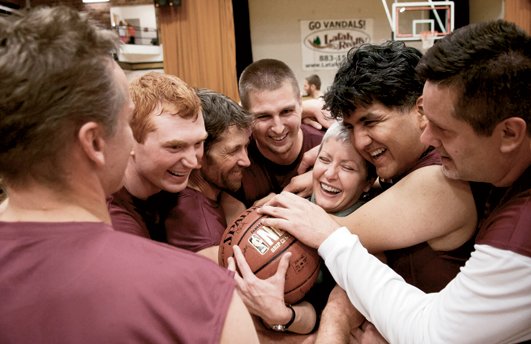 “Your plays are so antiquated and jejune!” Walter exclaimed after his team, the Spokane Dirty Realists, swept in from Washington to defeat the hometown Moscow SuperSonnets, 101 to 77, at the University of Idaho’s Memorial Gymnasium. “What’s that you’re running? The pick-and-Proust?”

Despite all illusions of swagger, including blustery trash talk by professors enrobed in sacred jersey numbers from their youth, the game, dubbed HooPalousa, had an earnest undercurrent. Born from a casual conversation between Walter and University of Idaho professor Kim Barnes, the event turned from a lark into a fund-raiser to help create an endowment at the college for a Native American MFA candidate—the first scholarship of its kind in the country.

“Who knew that all these academics were walking around with a favorite jersey number in their heads,” said Barnes (whose novel In the Kingdom of Men is forthcoming from Knopf in May) before the game. “It’s really cracked me up that they have this imaginary inner life. We have the paramedics on call.”

In fact, the alternate NBA battle was such a hit—drawing nearly six hundred spectators on a Tuesday night and raising three thousand dollars in donations—that the University of Idaho quickly announced it would be an annual occurrence.

Washington State literati are looking to host some of the action too: Eastern Washington University’s Get Lit! Festival in Spokane is working with Walter and Barnes to stage a rematch during this year’s event, which will take place from April 10 to April 15. Authors and professors in the area, such as Gonzaga University poet Tod Marshall, are eager to get into the game, and Walter, whose novel Beautiful Ruins is forthcoming from Harper in June, has also asked festival authors Steve Almond and Colson Whitehead to play.

On the East Coast, the Brooklyn Book Festival, scheduled for September 23, is exploring the idea of forming a team to challenge the Dirty Realists at a Bookend event during the festival weekend.

“I think the image of authors doing anything physical, and on a team, is almost unthinkable—softball has been an author sport for years, but that often involves coolers of beer and sitting around for long periods of time,” muses Harold Augenbraum who, as executive director of the New York City–based National Book Foundation, emphasizes he is speaking strictly for himself. “We have an image of Ernest Hemingway and Morley Callaghan boxing, or perhaps of David Foster Wallace playing tennis, but an urban-associated sport in which teamwork is a premium? Novelists passing the ball so someone else can score? Hoping for an assist? The image of the hard-drinking, chain-smoking writer running up and down the court without wheezing and heart attacking? Now that’s a fascinating sight.”

Fascinating sights were plentiful at last November’s game on Idaho’s pine-studded campus; the event wove together threads of basketball, literature, and local tribal culture. A large hide drum took center court at the opening of the game as the Vandal Nation Singers, composed largely of Nez Perce tribal members (some of whom played for the SuperSonnets), sang a song of welcome.

Among the assembled authors, professors, ringers, and rez ballers, several stood out. Poet Robert Wrigley, a professor at the University of Idaho and Barnes’s husband, assumed the role of game announcer. Artist and Nez Perce tribal chair Brooklyn Baptiste loomed at the low post for the SuperSonnets. Montana hoops legend Jonathan Takes Enemy, whose travails as a young basketball hero on a remote Crow Indian reservation were the subject of a memorable and searing Sports Illustrated article in 1991, played guard for the home team. The forty-six-year-old says he was drawn out of semiseclusion by the theme of the night. “Anything I can do to help a Native American succeed, I’m more than willing to help,” says Takes Enemy, who went off for thirty against the Dirty Realists.

For all his literary fame, according to Nez Perce tribal member and SuperSonnets guard Bob Sobotta, Sherman Alexie, a longtime supporter of the former Seattle SuperSonics (now the Oklahoma City Thunder) and amateur player, came in to HooPalousa with a winless record in reservation tournament games against some of the very players he was about to face. “At least four of these guys were on a team that beat me and [my brother] Arnold by a hundred points,” Alexie admits.

Against such opposition—and daunting personal history—Alexie and Walter loaded up the Dirty Realists with such ringers as their good friend Shann Ray, author of the story collection American Masculine (Graywolf Press, 2011) and a professor at Gonzaga, and former Gonzaga basketball star David Pendergraft.

More than the sheer delight of a literary hoops mashup, the theme of helping a Native American writer was the draw for Alexie, as it was for other players in the game. “It’s huge. There are still a lot of young Native poets out there, but it’s been eighteen years since a Native writer broke out in fiction,” Alexie says. “Susan Power, with The Grass Dancer (Putnam, 1994), was the last one. So maybe we find the one that breaks out.”

As Mojave poet Natalie Diaz, also a former pro basketball player, wrote in her poem “Top Ten Reasons Why Indians Are Good at Basketball,” which she penned to commemorate the game: “Because a long time ago, Creator gave us a choice: You can write like an Indian god, or you can have a jump shot sweeter than a thirty-two-ounce can of commodity grape juice—one or the other. Everyone but Sherman Alexie chose the jump shot.”

Kevin Taylor was once hailed as the free-throw champion of his freshman gym class at St. Patrick’s High School in Chicago. He is now an independent journalist in the interior Northwest.

Natalie Diaz should challenge everybody bball.