Every Tuesday morning, twenty to thirty writers gather in a meeting room in the basement of the Cathedral Church of St. Paul on Tremont Street in Boston. Each member of the Black Seed Writers Group gets a pen and a yellow legal pad and, after catching up with one another, sits down and gets to work. The writing they produce will eventually fill the pages of the Pilgrim, a literary magazine celebrating its fifth anniversary this December. The Pilgrim looks like just about any of the small literary magazines lining the shelves of local bookstores and cafés, but it is different in one major respect: Its contributors are all part of Boston’s homeless community. 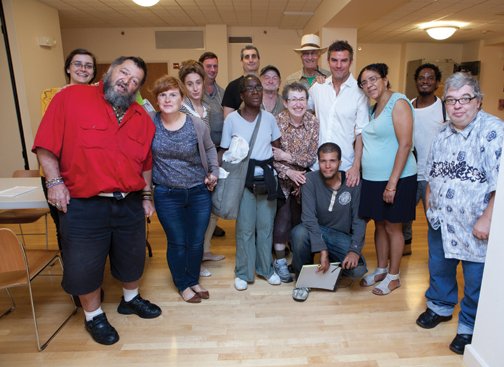 The Pilgrim is the brainchild of James Parker, a contributing editor and cultural columnist for the Atlantic. In 2011, while on a sixty-mile pilgrimage with the MANNA ministry of the Cathedral Church of St. Paul, Parker was inspired to launch the writers group and journal with the idea of pilgrimage as a guiding theme. “Homelessness is a state of acute pilgrimage,” writes Parker on the journal’s website, “a condition of material and occasionally moral emergency, and thus a place where the world reveals itself under the pressure, or the pouring-in, of a higher reality.” When he returned from his own pilgrimage, Parker established the Black Seed Writers Group to give homeless people in downtown Boston an opportunity to gather, write, and share their work. The group is named for the nearby café where it first met, but its ranks soon swelled beyond the café’s capacity and it moved to the cathedral next door. Each week, Parker provides a few open-ended prompts to get the writers going. There is no formal workshop, and anyone who is homeless, recently housed, or transitioning into a home is welcome to join. Members of the group come and go, though each week there are at least a few regulars.

“If we’re the Black Seed Writers Group,” says Margaret Miranda, a writer in the group, “the people helping us are mission figs: They surround the black seeds at the center, they’re nurturing, and they’re on a mission. Besides,” she adds, “think of the literary significance of figs.” (When Miranda presented her metaphor to Parker, he asked her if that makes him a mad vegetable. Miranda replied, “In forty years, you will be.”) In addition to Parker, the other volunteers who help facilitate the workshop include Kate Glavin, an MFA student at the University of Massachusetts in Boston; Libby Gatti, a diocese intern; and James Kraus, a graphic artist who refers to himself as “the other James.”

Miranda and several other regulars set the group’s tone: After a few minutes of greeting and banter, they settle into their various writing processes and work diligently through the hour. A man named Joe dictates into his phone and transcribes his recording; Steven thumbs through a dictionary; Cody paces back and forth before plunging into his work. Rob, a wiry writer in a Red Sox hoodie, brews the coffee.

“This is the most punk-rock thing I’ve ever been part of,” says Parker, who first connected with the homeless community through music. At age twenty-two, Parker was immersed in Washington, D.C.’s independent music scene, and discovered the city’s Community for Creative Non-Violence (CCNV), a thriving facility for the homeless, through the liner notes of a music album. Parker lived at CCNV as a volunteer for several months, but soon moved to Boston and lost touch with the homeless community over the next two decades, until founding the writers group.

After each session, Parker gathers all the work and splits it among himself and the other volunteers to transcribe. He then prints the writing in packets that he distributes the following Tuesday. Within a week of attending the Black Seed Writers Group, therefore, every participant is a published author; additionally, the packet entices writers to return the next week. Parker then chooses work from these packets to include in the Pilgrim, which he publishes eight to ten times per year. The Pilgrim is printed right where it’s produced; the administration at the church lets Parker use its printers, and subscription fees—the journal has a circulation of a few hundred—provide funding for the paper and ink.

As a writer himself, Parker believes fervently in the power of publication. While he was writing his first book, his wife had one of the chapters printed as a chapbook, and it transformed the way Parker approached his work: “It was so powerful to me to have something published,” he says. When he founded the Pilgrim, the heart of his mission was to publish as many voices as possible—particularly those that would normally go unheard. In 2015, according to government census figures, the homeless population of Boston was 7,663—a 5.6 percent increase from the previous year. Since it was established, in December 2011, the Pilgrim has published more than 150 different writers.

The Pilgrim does not have a specific style; instead, writers are encouraged to find their own style, and to push their voices deeper. Participants write poems, stories, memoirs, prayers, protests, and everything in between. One regular attendee, Rolando, is a journalist who catalogues various aspects of life at the shelter through a series of bullet points that create something between a list, a poem, and an essay. One week he wrote about lost property; the next week he categorized the various safety nets at the shelter. Cody writes prophetic images from his imagination. He describes a dream cover for his book, were he to write one: a rendering of the globe with a seven-headed serpentine monster crawling out of a deep chasm in the center.

In 2014 Parker expanded the Pilgrim to include a book imprint, No Fixed Address Press. Its first publication was Paul Estes’s science fiction novel, Razza Freakin’ Aliens, a madcap space opera featuring the intergalactic adventures of Dave the Spy, who encounters many multispecies creatures, such as rebel alien cats that yell, “Hairrbawlz, kill ’em all!” This year, the press published Miranda’s debut collection of poetry, Dressing Wounds on Tremont Street. The book is at once devotional and jocular, weaving together portentous subjects with light banter; think John Donne meets Kenneth Koch.

Now, Parker says, No Fixed Address Press is concentrating on what he calls broadsheets—chapbook-length collections that are easier, cheaper, and quicker to produce than full-length books. Any profits that the Pilgrim and No Fixed Address Press might bring in from sales go directly into producing the next publications. Parker is excited to watch the group’s reach naturally expand, but is careful to avoid a “dissipation of essence,” as he puts it. As the group grows, it’s important for Parker to maintain an environment of openness, encouragement, and safety—an intimate space where members can nurture each other as writers. “We want growth that’s real growth,” said Parker. “Growth as writers.”

Adrienne Raphel is the author of What Was It For (Rescue Press, 2017) and But What Will We Do (Seattle Review, 2016). Her work has appeared in the New Yorker, Paris Review Daily, Poetry, Lana Turner Journal, Prelude, and elsewhere. She is a graduate of the Iowa Writers’ Workshop and a doctoral candidate at Harvard University.