For over five years Lambda Literary—a national organization that champions lesbian, gay, bisexual, transgender, and queer (LGBTQ) books and authors—has been changing the lives of students across New York City through its free Writers in Schools program. The program centers on a simple yet profound idea: Through reading books by LGBTQ authors, then meeting those authors in person to hear about their life experiences, youth will learn to celebrate queerness. In September, Lambda announced that in recognition of the program’s value, the New York City Council had decided to grant the program four times the amount it previously received in funding: $400,000, up from $100,000. 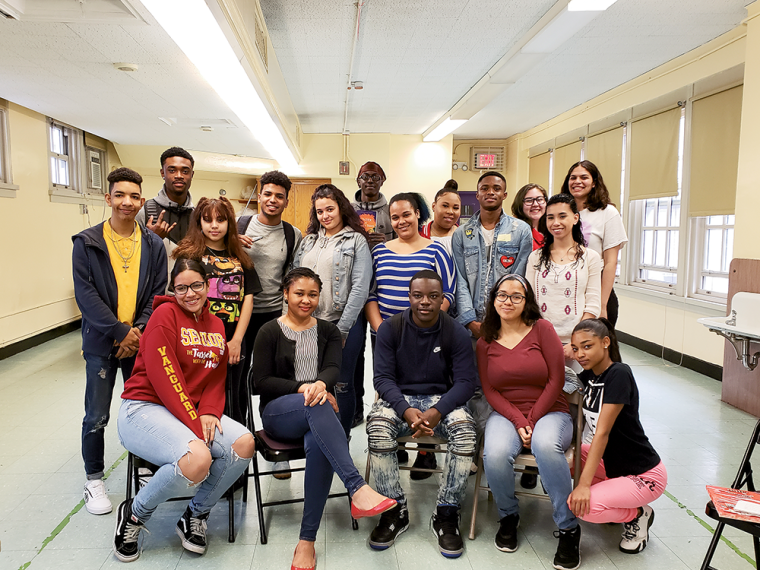 The program is designed for both clubs and classrooms, from kindergarten through twelfth grade. For classrooms, Lambda provides books along with curriculum materials to help teachers guide discussion, while for clubs, like a school’s gender-sexuality alliance, the books become springboards for less formal, more relaxed conversations about identity.

Program manager Monica Carter, who has been involved with Writers in Schools since its inception in New York City in 2015, says the highlight for students is always the author visit. A writer might come to a classroom to facilitate a book discussion, chat with a club about their writing and life, or address a school-wide assembly. Lambda staff members are thoughtful about laying the groundwork to make each visit a success: For example, teachers are given guidance on how to prepare their students so that the experience feels safe for both the authors and the youth.

Chinelo Okparanta, whose second novel, Harry Sylvester Bird, is forthcoming from Mariner Books in July, has been a part of the program since 2017 and has visited a number of high schools throughout New York City. Over e-mail she said, “I always expect that I will learn as much from the students as they learn from me, so it’s important for me to listen well and ask questions, too.” Through talking with students, she said, “I have stumbled upon new ways of understanding the world—and of interrogating my work.”

Meredith Talusan, author of the memoir Fairest (Viking, 2020), worked with high school students this past spring in a virtual environment. Like Okparanta she was impressed by the students’ rigorous curiosity. “While I was discussing the relationship between my trans and immigrant identities, I remember one of the students not only referring to my book, but also quoting an article I’d completely forgotten I wrote and comparing the way I talked about my identities in the article versus the book. I doubt I’ve ever been so closely read!”

For queer students these events can be life-changing. “We’ve seen the number of students who feel safe coming out increase after the author visits,” Carter says. Sometimes students come out to the authors during the event itself. “These visits have real-life, real-time impacts that help increase the acceptance and affirmation of queer kids and queer identity.” A 2019 survey from GLSEN, a national organization dedicated to LGBTQ student rights and safety, supports what Lambda hears anecdotally: In schools where students have this kind of curriculum exposure to queer identity, 66.9 percent of queer students report that their peers are “somewhat or very accepting of LGBTQ people,” compared to 37.9 percent at schools without it.

In some cases the program has had a school-wide effect. The concept of talking openly about pronouns has been introduced to the school culture. According to Carter, some school administrators have even reversed their decisions against providing students with gender-inclusive bathrooms.

With its increased funding, the Writers in Schools program will be bringing books and author visits to ten thousand New York City public school students this school year alone. As in years past, many of the schools will be Title 1 schools, where the majority of students’ families are low-income. Lambda also runs free poetry workshops, in addition to virtual citywide events with best-selling authors such as Charlie Jane Anders, Malinda Lo, and Benjamin Alire Sáenz. These provide opportunities for an even broader group of queer students—and teachers, too—to encounter someone who models how to live with honesty and joy. “These events are celebrations of reading as well as queer life,” Carter says. “They become a touchstone for queer students and their allies.” 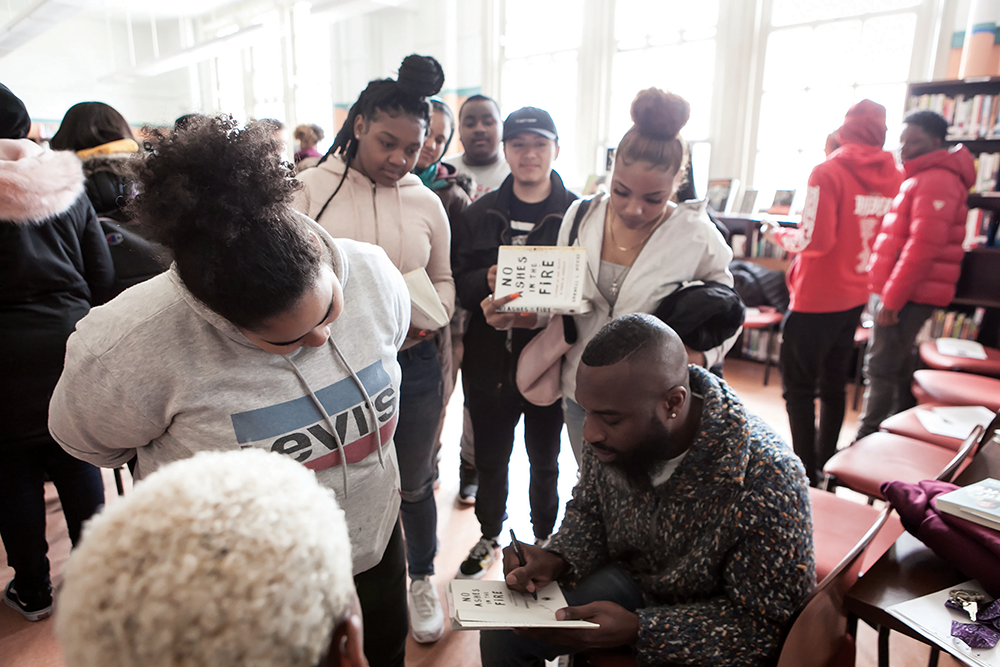 Darnell L. Moore signs copies of his memoir, No Ashes in the Fire: Coming of Age Black and Free in America, for students at Forsyth Satellite Academy in 2019. (Credit: Monica Carter)

Outside of New York City, Lambda has run pilot programs in Oakland and Milwaukee. Carter hopes that, with the success of this program in the nation’s largest public school system, other cities will reach out and the program can expand even further.

But no matter how the program scales up, Carter reiterates that it all comes back to the books and the people at the schools who seek out these connections. “This wouldn’t happen if it weren’t for the authors’ work,” she says. “And the students, who open their hearts and their minds to other experiences, and the educators who are committed to doing the things that need to be done in order to make safe spaces for queer students and their allies in their school.”

Brian Gresko is a writer based in Brooklyn, New York, where he co-runs Pete’s Reading Series.

The author of I Know You Know Who I Am seeks to approach his characters without judgment.

The Campaign to Save Lambda Literary
by Emma Hine | Online Exclusive 4.28.20

Lambda Literary, a nonprofit dedicated to supporting LGBTQ literature and writers, has launched a fund-raiser to help it stay afloat during the COVID-19 pandemic.

“You place yourself in the story, and one by one you begin to fill in the holes the world has left behind.”