The website for KGB Bar, one of the New York City literary world’s most iconic gathering places, currently features a black banner: “In compliance with New York State government orders in response to the COVID-19 pandemic emergency, KGB Bar and The Red Room will be closed till we’re able to gather and work safely.” The bar and event space, which every evening is typically filled with artists and art lovers enjoying a beverage and a performance or reading, has been closed since March 14. 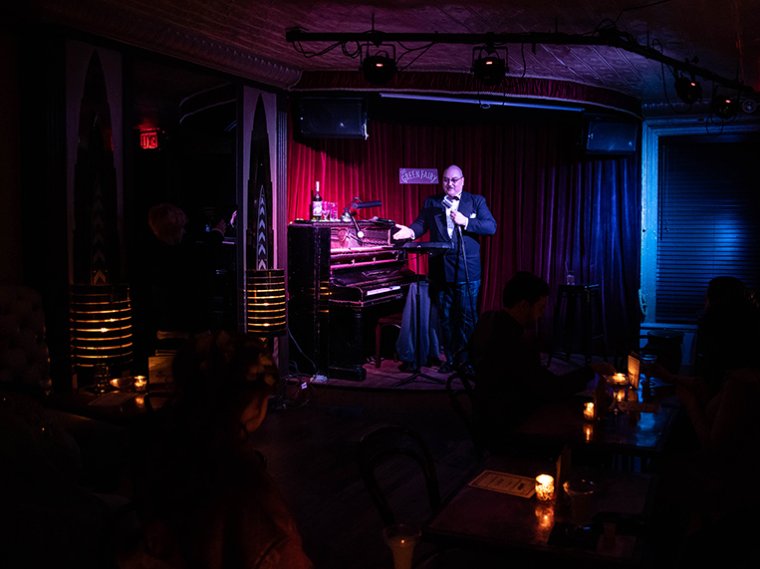 Kellfire Bray leads an audience in the Red Room at KGB Bar through the history of absinthe at a recent event.

“We have had occasional difficulties in the past,” says the bar’s founder and owner, Denis Woychuk, “but nothing on this scale or even close.” In its twenty-six-year history, KGB Bar has only ever closed on Thanksgiving and Christmas because, Woychuk says, “we feel we must be there to serve our community.”

When Woychuk, the son of a Ukrainian immigrant, opened the East Village venue in the early nineties, community was a driving force in his decision. “Every significant art movement, from the Beats back to the Renaissance, was fueled by people sharing their creative energies and feeding off each other for further inspiration,” he says. “I wanted to facilitate something like that.” And he did. Since then the Communist-themed venue—which is part bar, part speakeasy, part event space—has been, in the words of novelist and musician Rick Moody, “to literary life in NYC what CBGB was to rock and roll, a destination, a once-in-a-lifetime venue.”

Community has also defined how Woychuk and the bar’s general manager, Lori Schwarz, have responded to the COVID-19 crisis: Their primary focus during this time is to protect their workers and continue to be a gathering space—albeit a virtual one at the moment. They’ve had to innovate: Several of the bar’s upcoming special events will be live-streamed from the hosts’ homes, and drink tickets for when the bar reopens are for sale by e-mail. Woychuk and Schwarz are also taking deposits for future events and holding an online fund-raiser. Thirty percent of any proceeds will go directly to the nine staff members, while the remaining 70 percent will cover the bar’s high operating and maintenance costs. (Woychuk has looked into delivering carry-out, which is still allowed per the government mandate, but has yet to find a way that won’t risk exposing his crew.)

With luck, and with help from the community, these measures may be enough. The online fund-raiser’s summary ends, “It would be a shame for this literary landmark to not be available for future generations of writers.” Rick Moody puts it this way: “At this time we should do anything we can to help KGB get through these dark days.”

Emma Hine is the author of Stay Safe, which received the 2019 Kathryn A. Morton Prize in Poetry and is forthcoming from Sarabande Books in January 2021. Her poems and essays have recently appeared in 32 Poems, Colorado Review, Copper Nickel, Guernica, and the Southern Review, among other publications.

Postcard From the Pandemic: Zoom Teaching
by Nina Schuyler | Postcard 3.23.20

An adjunct professor at the University of San Francisco writes about transitioning to online learning after her physical classroom was closed.

Cancellations and Postponements: Retreats and Contests Affected by the Crisis
by Staff | Online Exclusive 6.19.20

A growing list of conferences, festivals, and writing contests that have been affected by the coronavirus pandemic.