Six years ago, when Emily St. John Mandel published Station Eleven (Knopf, 2014), her best-selling novel about a pandemic flu that decimated the world’s population, she couldn’t have known that her next novel, The Glass Hotel (Knopf, 2020), would arrive at the height of a pandemic flu outbreak that, if not as lethal as the fictional “Georgia flu” of her earlier book, is nevertheless upending the world economy—and, not incidentally, her twenty-five-city book tour. 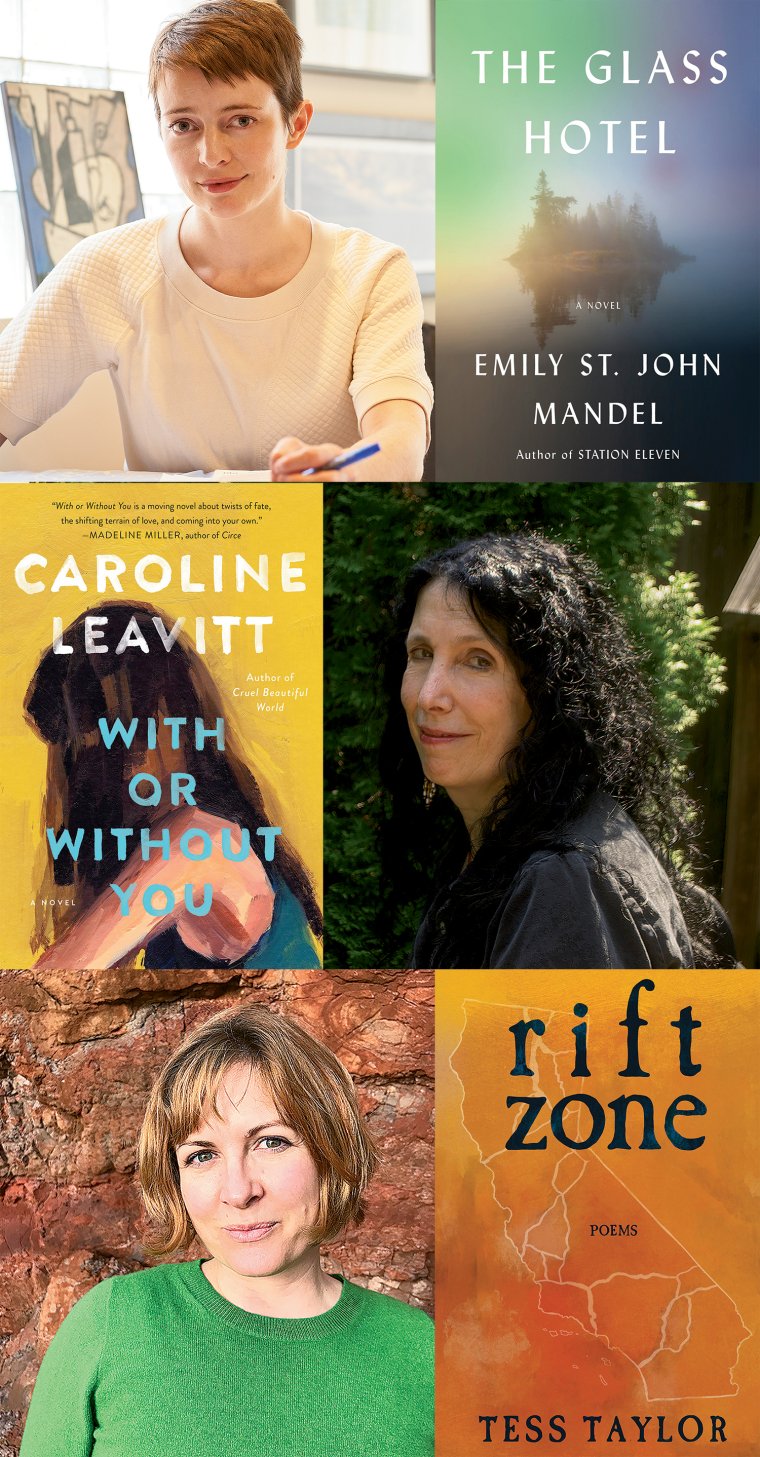 From top: Emily St. John Mandel, author of Glass Hotel; Caroline Leavitt, cofounder of A Mighty Blaze and author of With or Without You; and Tess Taylor, author of Rift Zone.

“Yeah, irony, right?” Mandel says with a rueful chuckle. “I maintain that this is nowhere near as bad as the Georgia flu. We’re not going to end our days in traveling Shakespearean theater companies crossing a post-apocalyptic wasteland.”

Perhaps not, but the coronavirus pandemic has radically disrupted the book business, setting off waves of bookstore closures and book festival cancellations, making it nearly impossible for authors like Mandel to tour in support of their books. For now these closures and cancellations are only affecting books published this spring, but if the national lockdowns continue, it could send lasting shockwaves through the always fragile publishing ecosystem.

Already, though, authors and booksellers are teaming up to shift canceled live events online using digital tools like Zoom and Facebook Live. Mandel herself will be participating in a live digital Q&A Tuesday, March 24, with author Isaac Fitzgerald, hosted by Brooklyn’s Greenlight Books, where Mandel was originally scheduled to launch her book in person. The same night, a new organization, A Mighty Blaze, run by writers Jenna Blum and Caroline Leavitt, will be featuring Facebook Live events for Laura Zigman’s new novel Separation Anxiety (Ecco, 2020) and Andrea Bartz’s novel The Herd (Ballantine, 2020), along with a slate of debut authors.

It remains to be seen how effective these digital book events will be, especially for smaller presses that rely on in-person events at bookstores and festivals to introduce their authors to readers, says Mary Gannon, executive director of the Community of Literary Magazine and Presses. “I think everybody is trying to pivot and reinvent as quickly as possible just to experiment with how these events might work,” she says. “So it’s hard to tell at this point if digital events can make up for canceled live ones, but there’s kind of nothing else to do.”

No matter how successful these digital events are, virus-related lockdown orders and restrictions on in-person gatherings will hurt authors and the book industry more generally, Gannon says. When fears of infection slashed attendance at the Association of Writers and Writing Programs (AWP) Conference earlier in March, she says, many of the small presses in her organization saw sales for the month drop by as much as 20 or 30 percent, just from the loss of in-person sales from that one event.

“I think there’s going to be serious negative impact on both small and large publishers, but the smaller publishers are the ones that are more at risk because they have fewer resources,” she says. “It’s especially important right now for us to support literary magazines and small presses in any way we can. They’re essential to ensuring the health and diversity of the literary arts.”

Indeed, Paul Bogaards, deputy publisher at Knopf and Pantheon Books, offers a slightly more sanguine view of the disruption to live author events. At Knopf and Pantheon, imprints of the Knopf Doubleday Publishing Group, which is a part of Penguin Random House, Bogaards says, all book tours have been canceled or postponed through the end of April, which impacts about a dozen titles at just those two imprints. “I can’t speak for the industry, but given the CDC protocols in place, no one is touring,” he says. “Physical gatherings are kaput. Boots-on-the-ground book tours are dead for the moment.”

But, he says, critics haven’t stopped reviewing books, authors continue to sit for interviews, and publishers are able to maintain their social media campaigns. “Touring is just one spoke in the wheel of book promotion and publicity,” he says, “and, in point of fact, publishers are doing less of it than they once did.”

Bogaards is encouraged by upticks in sales of commercial fiction and topical nonfiction, along with titles that touch directly on contagious diseases like Stephen King’s The Stand (Doubleday, 1978), Albert Camus’s The Plague (Gallimard, 1947), and Mandel’s Station Eleven. Publishers are hoping the enforced down-time will spark renewed interest in their classic titles. To that end, Knopf and Pantheon are launching social media initiatives designed to prompt readers toward its backlist catalog. “I mean, if you are under a government-ordered lockdown, what better way to travel than through the pages of a book?” he says.

In the meantime, authors at small and large publishers are exploring digital alternatives to live events. Blum and Leavitt, the organizers behind A Mighty Blaze, were among the first to see the need for a hub for writers whose book tours were stranded by the pandemic. The idea for the site came about after Leavitt, author of twelve books, including With or Without You, due out in August from Algonquin, learned that the Texas Library Association Conference, where she had been invited to appear, had to cancel and move its offerings online.

“I had spent a lot of time memorizing what I thought was a funny speech, with hand movements and everything,” she says. “I made a video of it and I sent it to Algonquin just for a lark, and they liked it so much they said, ‘Ooh, we can send that out.’ So I started the ‘Nothing is Cancelled Book Tour,’ where I told authors to make little videos and I’d post them as if they were in a bookstore. All I asked is that they shout out another writer and shout out an indie bookstore.”

The site took off, and Leavitt quickly joined forces with Blum, author of The Lost Family (HarperCollins, 2018). Calling themselves “two women writers in yoga pants trying to help other writers whose book tours have been canceled,” the pair has already attracted more than fifty industry partners, including Poets & Writers and two hundred author participants.

“It’s grown exponentially every day,” says Blum. “I would say it’s been growing faster than COVID. We’ve been having so many writers join us, and so many industry people from publishers to publicists to agents to indie bookstores to literary conferences and festivals—everybody wants to help.”

Still, digital events aren’t for everyone. Poet Tess Taylor is publishing two collections this spring, Last West: Roadsongs for Dorothea Lange, commissioned by New York’s Museum of Modern Art, and Rift Zone, due from Red Hen Press in April. Taylor was able to attend a reading for Last West at MoMA in February, but most of the subsequent events for that book, along with twenty-five more events planned for Rift Zone, have all been canceled.

The two books contained a decade’s worth of poems, Taylor says, and she spent a year organizing the events to support them. “It feels like building a sandcastle,” she says. “You know, you build it up and up and up and then a wave comes and it knocks it down. I don’t know if I’m sad or angry. I’m all those things, and then sometimes I’m just humbled because what’s going on is so much bigger than just us or me.”

Living as she does in California, which is currently under a shelter-in-place order, Taylor says she will be throwing herself a digitally streamed “imaginary book party” with fellow poet Judy Halebsky, inviting friends “to have a glass of wine and watch us give our reading” online, and plans to regularly post poems by poets she admires. But she admits to feeling ambivalent about moving her live events online.

“I’m using social media because I want to be in a community right now at this moment when we can’t go out in the world, but I love people,” she says. “I love human beings. I really miss them. I love bookstores and want to support them. I love the feeling of live poetry, having it read, being in a room where someone is sharing their words and their breath with you—in the most wonderful way, not in a toxic way. Poetry is a beautiful way of sharing breath, and I miss that.”