The late German novelist Hans Reiter, who wrote under the pen name Benno von Archimboldi, is famous in part for his second novel, The Endless Rose. The story, set in Prussia in the first half of the twentieth century, is loosely based on the author's life—from his early years as a servant in the country house of the Baron von Zumpe to his final days as a foot soldier in Nazi Germany. It's a provocative book about human nature and fragility. Only it doesn't actually exist. 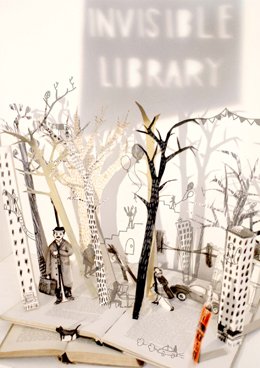 Archimboldi is a character in Roberto Bolaño's novel 2666, a paperback version of which will be published this month by Farrar, Straus and Giroux, and The Endless Rose is one of several imaginary novel titles mentioned in Bolaño's narrative. The phenomenon of such imaginary works alluded to in real books led fiction writers Levi Stahl and Ed Park in 2007 to start a blog called the Invisible Library, where titles like The Endless Rose are catalogued. "The genesis of the library was very simple," says Stahl. "I happened to read Nabokov's The Real Life of Sebastian Knight and Graham Greene's The End of the Affair in quick succession, and was struck by the number of nonexistent novels mentioned, and at times even described in each book."

Since its inception, the blog has continued to grow as readers submit the titles of unwritten books they've discovered in their own reading. This past summer it also served as the primary inspiration behind the Invisible Library exhibition, which ran from June 12 to July 12 at the Tenderpixel Gallery in London.

The exhibition was conceived by INK Illustration, an art collective founded in 2007 at the Royal College of Art in London by illustrators Chloé Regan, Rachel Gannon, and Fumie Kamijo. For the Invisible Library project, INK collaborated with Real Fits, an online arts periodical and literary foundation, to choose forty titles of imaginary works from Stahl and Park's blog, which they then transformed into actual books. Some of the titles included When the Train Passes by Elisabeth Ducharme, mentioned in Vladimir Nabokov's Bend Sinister (Henry Holt, 1947); You Can't Do Anything Right by Margery McIntyre Flood, mentioned in Caitlin Macy's story "Bad Ghost" from her collection Spoiled (Random House, 2009); and Archimboldi's The Endless Rose.

While INK artists illustrated and designed the book covers, they invited best-selling novelists, nonfiction writers, and other artists to contribute a page to each of the books. Among those who participated were British author and filmmaker Ian Sinclair, young adult author and screenwriter Saci Lloyd, American musician and cartoonist Peter Blegvad, Real Fits editor Mark Donne, and former Elle staff writer Ellen Burney.

During the exhibition, the Tenderpixel Gallery, located in Cecil Court—the renowned Victorian bookshop thoroughfare considered by many to be the heart of literary London—was transformed into a library, where attendees were encouraged to "sign out" books and write their opening or closing passages based primarily on the titles and cover illustrations. At the close of the exhibit the once-empty pages of the books were transformed into vivid narratives, full of various voices and shifts in perspective and style, making the library a postmodern literary experiment.

A series of workshops, with a focus on collaboration and individual production, was also held during the monthlong exhibit. For one of these workshops, INK invited the graphic collective Europa to lead participants in making six sixteen-page books with hand-sewn bindings, all based on titles from the library.

Part of INK's creative mandate is to make cutting-edge yet inviting, viewer-inclusive art. "We have always been interested in the relationship that viewers have with exhibited work and in how to make their experience richer, more informative, and more diverse. We want our work to be totally accessible, and for you as a visitor to feel at home and comfortable in the space rather than excluded," says Gannon, who adds that they have a special fondness for literature. "Stories matter to us. They are accessible; they draw readers in and take them on a journey."

The goal of the exhibition was to bridge the gap between the imaginations of viewers and artists, leading to the production of a physical book that enriched everyone's gallery experience. After it closed in mid-July, the books went on display in libraries throughout London.

At a time when book publishing, and print culture in general, are looking for more ways to go digital, INK Illustration's Invisible Library was a successful attempt to enliven the culture's relationship with stories, remind readers of the importance of books, real or not, and reinforce their place in our collective imagination.

I very much enjoyed learning about the interlinked projects of the Invisible Library. However, there was a glaring omission. I mean, sure, this gimmick is hardly new, or rare. But one of the most delightful & devious authors ever to cite imaginary books is certainly Jorge Luis Borges. His work is peppered with these gags, often intermixed with actual sources. The story that stands out most in my mind is 1941's "A Survey of the Works of Herbert Quain" (var. "An Examination..."). We have _The God of the Labyrinth_, _April March_, _The Secret Mirror_, & _Statements_. As much as I enjoy Gabriel Garcia Marquez, I have read some of JLB's stories dozens of times, finding new delights each time. I'm grateful that the Invisible Library has noted no less than 18 faux books, but I do wish that P&W would mention him a bit more often, for the edification of aspiring writers everywhere.
X